HOGS at No. 1 LSU preview 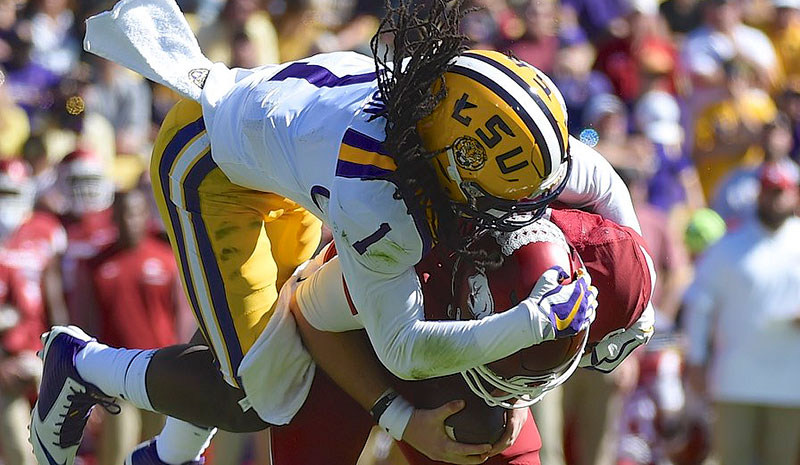 FAYETTEVILLE - Picture David vs. Goliath but with David’s slingshot checked at the door.

That’s the mismatch expected Saturday night pitting the SEC’s worst team against the best in the league and the nation.

LSU head coach Ed Orgeron’s Tigers emerge fresh into Baton Rouge’s night air, the favorite time for the pumped 102,000 fans expected to breathe life into Death Valley, with a Heisman Trophy leading candidate quarterback and an offense that just amassed 714 yards in a 58-37 victory at Ole Miss after winning 46-41 the previous week at 2018 SEC champion Alabama.

Arkansas brings a 17-game SEC losing skid and a first-time interim coach with Chad Morris fired after a 45-19 home non-conference loss to Western Kentucky, the last nail in Morris’ Arkansas’ 4-18 coaching coffin dating to his 2-10, 0-8 debut in 2018.

Barry Lunney Jr., the Fort Smith native son of retired Fort Smith Southside and Bentonville High School coaching legend Barry Lunney Sr. and Arkansas’ 1992-1995 quarterback and since 2013 tight ends coach, was given the short straw as interim coach against the nation’s best team. The lone Arkansan on Arkansas’ full-time staff has handled it like the “Razorback through and through,” that Arkansas athletic director Hunter Yurachek called him.

Promising victory under these circumstances would seem hollow, though Lunney quarterbacked the 3-7-1 1992 Razorbacks under interim coach Joe Kines to a 25-24 upset of previously undefeated and  No. 4 Tennessee in Knoxville. But Lunney does vow regardless of final score to instill Razorback  pride in a team that he and Yurachek concur hasn’t shown the fight since the second half of the 24-20 loss at Kentucky. The loss in Lexington precipitated the 51-10, 48-7, 54-24 and 45-19 debacles vs. Auburn, Alabama, Mississippi State and Western Kentucky. The Hogs were deemed nearly as overmatched vs. Auburn and Alabama as they are vs. LSU, but the Mississippi State and Western Kentucky games hit hard.

“Our job and my job is to make sure that these next few weeks that we figure out a way to play like Razorbacks,” Lunney said upon accepting job Nov. 10. “We’ve lost that the last few weeks. We are going to do our darnedest and everything we can to pump some life back into these guys and go and play our best football game of the year when we go to Baton Rouge. Whatever that looks like, I just want it to be our best game - offense, defense, special teams, together. If we'll do that and then we'll do it again the next week when we go to Little Rock (finishing he season there Nov. 29 against Missouri), we're going to have a chance to win a football game.”

Missouri, maybe, but this week matching the league’s best offense against the worst defense…

“They have no weaknesses,” Lunney said of the LSU attack. “They make you pick your poison.”

LSU quarterback and obvious Heisman leader Joe Burrow has completed an astonishing 78 percent of his passes (268 of 341 for 3,687 yards and 38 touchdowns vs. six interception while receivers Justin Jefferson and Ja’Marr Chase each exceed 1,000 yards receiving. The more the defense commits to defending the pass the more vulnerable it becomes to running back Clyde Edwards-Helaire and his 958 yards and 12 TDs on 158 carries.

Burks has caught 25 passes for 379 yards and he returns kickoffs and punts.

“They (Ole Miss) and their quarterback brought a dynamic that was fantastic,” Lunney said. “But I think it was clear to see LSU was in control of that game from start to finish.”

Since Morris has employed four quarterbacks, Lunney hasn’t divulged the starter to keep LSU guessing. However, since true freshman KJ Jefferson has the speed closest to Ole Miss’ Plumlee, it seems likely he’ll figure somewhere in the equation, regardless the starter.

The Golden Boot Trophy annually is at stake for the Arkansas vs. LSU game. While most everyone expects it to stay in LSU’s trophy case, former Ken Hatfield era (1986-87) Arkansas graduate assistant Orgeron reminds that last year’s 2-8 Hogs battled his 10-3 Tigers to a 24-17 game in Fayetteville.