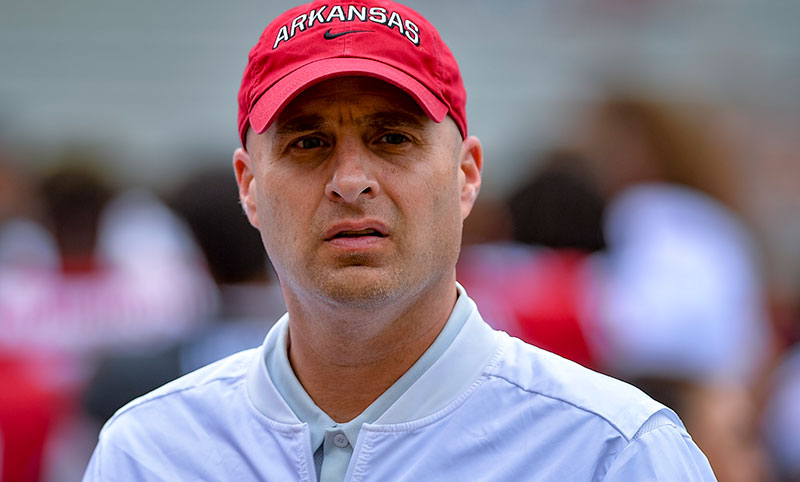 Lunney (in Jimmy Jones photo above) has practiced them all in this week’s workouts Wednesday and Thursday and acknowledged giving place-kick holder and scout team quarterback Jack Lindsey some practice time, too.

“Just so you guys (media) know, I think we have a pretty clear direction on what we anticipate doing in that game,” Lunney said. “But it’s going to be to our advantage to not divulge that.”

Apparently media aren’t the only ones asking about the quarterbacks.

“Shoot, my son asked me that this morning at the breakfast table, so you’re not alone,” Lunney said. “We have an idea of how we’re progressing to that. It’s not locked. It’s not dialed-in completely. But we’ll have that more finite on Sunday.”

WHAT ABOUT JACK?
A reporter mused about why not add Lindsey to the list, too?

“That would probably empty the roster at that point,” Lunney said of playing every quarterback. “Let me tell you, Jack’s done a great job in his role for us this year. Jack’s got some really nice qualities as a quarterback, and he worked in there a little bit yesterday and made a couple of nice throws. So who knows how this thing’s going to progress down the road these next few weeks?”

FIRST PRACTICE
Addressing media Tuesday and Wednesday before the start of practices, Lunney was asked to review Tuesday’s practice, his first since elevated from tight ends coach/special teams coordinator to head coach.

“I think it was a good practice, but it was just a practice,” Lunney said. “You don’t want to ever minimize them, but you don’t ever want to put too much emphasis on them either. Every one of them matters. Our challenge is to play our best game we’ve played all year. That’s our goal. And the only way to do that, like I told them yesterday, was to make yesterday our best practice we’ve had all year. So guess what I told them today? Today we need to have our best practice we’ve had all year long in order to play our best when we go to Baton Rouge. So that’s really how we approach it.”

CHAT WITH CHAD
Thanking Morris in his Monday introductory press conference for retaining him from the Bret Bielema Arkansas staff, Lunney was asked after Thursday’s practice if he had talked to Morris since Morris’ departure.

“We did,” Lunney said. “He called me the day of and was great. Just like I would expect him to. It was a really good conversation. It gave me some encouragement. We had a good heart-to-heart talk like he did with all of us. I was very appreciative of that. It meant a lot.”

“The open date will do him well,” Lunney said. “I think he’ll be fine.”

Offensive guard Kirby Adcock, idled by injury the past two games, is hopeful of playing against LSU but not ready to resume practicing, Lunney said.

“If we played Saturday, I’d say no,” Lunney said, “but with the rest and recovery, it’s not ruled out.

NO MUSIC NO MORE
The  blaring pre- and during-practice music that former Arkansas coaching predecessors  Bielema and Morris allowed was discontinued Tuesday by Lunney and seems likely not to resume.

“Eliminated the music, which is just a small, petty thing,” Lunney said. “But it was good yesterday (Tuesday). I liked it. I liked the communication. I liked the noise that just coaching chatter and communicating created during practice, so we’re just going to do it again today.”