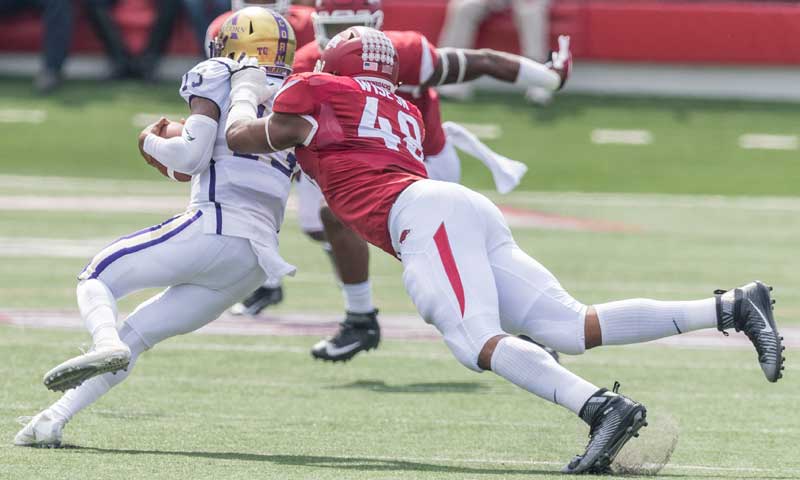 FAYETTEVILLE - Defensively it seems the Razorbacks are putting Saturday’s LSU game into a blind trust.

Just seeing to it they do their own jobs won them last Saturday’s game 31-10 over then 10th-ranked Florida after trying to do teammates’ jobs in a 56-3 loss at Auburn, several Razorbacks said Tuesday night.

The Razorbacks, a bowl eligible 6-3 overall and 2-3 in the SEC West and for the first time since the College Football Playoff rankings began in 2014 cracking the CFP rankings at 25th, host No. 24 LSU (5-3, 3-2) at 6 p.m. Saturday on ESPN in Reynolds Razorback Stadium.

The quicker the Razorbacks trailed at Auburn the more everyone impeded each other trying to catch up, they said.

“Guys were trying to play positions they don’t play,” nose tackle Taiwan Johnson said. “I can say for myself trying to do too much. That happens. And I think when we all settled down and realize  we  just trust each other the defense will work. That’s what happened last weekend, and I think we can do that move forward.”

Teamwork like gang tackling, a must against LSU superstar running back Leonard Fournette, is one thing.

Poaching into each others’ territory, trying to turn a game around singlehanded is another, the Razorbacks learned post Auburn and remedied against Florida.

“We had a lot more confidence in each other, and that’s the key part of it,” middle linebacker Brooks Ellis said. “If you don’t have confidence in each other, you are going to try and do too much and things are going to go haywire.  Correcting that was a big part of the Florida plan, and we did a great job of getting off the field and stopping the run.”

Florida netted but 12 yards rushing after Auburn ran an unprecedented 543 on the Hogs.

FOURNETTE AND GUICE
But Florida’s running backs don’t run like Fournette, last year’s Heisman Trophy favorite derailed early this season by injuries but back on track. Nor do they run like LSU’s Derrius Guice, excelling in Fournette’s three-game absence now excelling in complementary relief.

“Leonard Fournette and the other running back run downhill very hard,” Taiwan Johnson said. “It’s up to us to stop their forward momentum. When Leonard Fournette gets going downhill he is very powerful and very fast. If we can get him to stop his feet in the backfield or change direction from where he wants to then everybody can corral and get to him.”

“He’s very fast and hits the hole hard,” Johnson said. “He’s very good at jump cuts and good at juking. He’s that shifty back. He and Fournette complement each other if you let them.

“The plan is to get them behind the chains and make them throw on third down so we can come at them and mix things up.”

Arkansas’ secondary members also did their jobs cohesively against Florida.

“We really bought into the game plan and did our jobs individually, which helped us to do our job as a defense and as a team,” senior cornerback Jared Collins said Tuesday.

Wise, Arkansas’ most heralded defensive player off his midseason surge last year, had started every game until his shoulder limited him to a third-down specialist against Florida.

Wise worked the role well with a half-sack and two quarterback hurries just like he did coming off the bench last season.

“Yeah it kind of reminded me of last year to do third down coming off the bench,” Wise said. “I was well rested during the week and I knew when third down came I had to do something because I wasn’t doing anything else.”