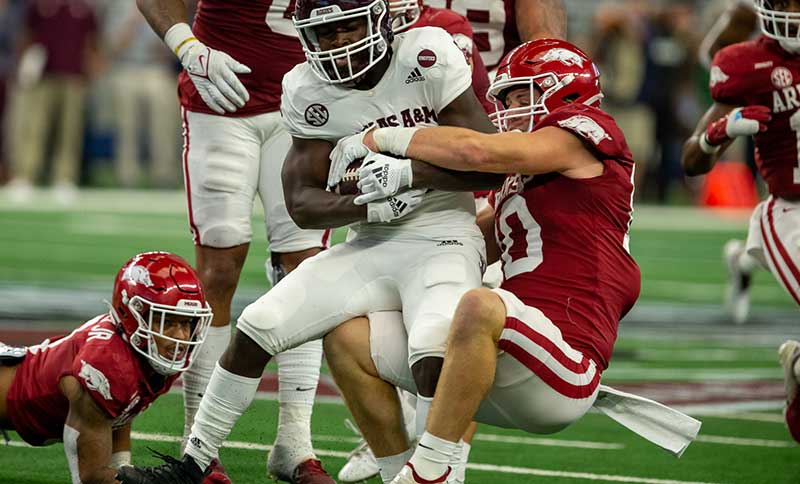 FAYETTEVILLE - Given they acceded to the NCAA mandate of taking Tuesday’s Election Day off to give players opportunity to vote, the Razorbacks hope their Sunday and Monday practices carry over into Wednesday’s preparation for Mississippi State.

Last Saturday when the Razorbacks were off, MSU's Bulldogs stifled visiting and then-No. 12 Kentucky 31-17.

"I'm not surprised, but they've been really good,” Pittman said. “Very disruptive. They have a lot of playmakers on defense. (Fred) Peters back there, the safety, he's really good. I think he's third on the team in tackles with a couple interceptions. I like their linebackers a lot. I think they're very active. Really what makes them go is schematics, a lot of movement. You have to be very athletic to catch hold of them when they're moving."

MSU ranks No. 5 nationally in passing offense at 371 yards per game, but its 8.94 yards per completion ranks last among all 130 FBS teams.

For the Bulldogs, the passing game equates to the running game. Behind only wideout Makai Polk (63 catches for 603 yards and six TDs), MSU running backs Jo’quavious Marks (58 catches for 344 yards and two TDs) and Dillon Johnson (42 catches for 261 yards) rank second and third in MSU receptions.

“He (Rogers) throws to his checkdowns,” Arkansas safety Joe Foucha said after Monday’s practice. “For most quarterbacks, it’s hard to do that. He does a good job of doing that. He goes through a lot of his progressions. The most important thing is just for us to stay in our defense and have good eyes and read the quarterback. When he checks it down we should have at least nine or 10 guys on the ball every time. That should help with the short passing game.”

“Very sound defense,” Morris said Monday night. “They’re kind of similar to the defense we play with the multiple high safeties. I feel like they can get very multiple with their looks, so we’ve gotta make sure our eyes are locked onto our task, paying a good amount of attention to detail and stuff like the corner blitzes. They like to drop their safeties down, swing the linebackers out and stuff like that, so we’ve just gotta be sound all across.”

SLIP SLIDING AWAY
Given the Hogs started 4-0 overall and 1-0 in the SEC, Pittman said the 5-3 Hogs must resurge from losing three consecutive SEC games to Georgia, Ole Miss and Auburn going into this Remember November stretch. The final four SEC games are: vs. Mississippi State, at LSU at 6:30 p.m. Nov. 13 on the SEC Network, at Alabama Nov. 20 and against Missouri at 2:30 p.m. Nov. 26 at Reynolds Razorback Stadium on CBS.

“You don't want to go 4-0 and ranked eighth in the country and then let it all slide away from you,” Pittman said of his unranked Hogs. “This (a win Saturday vs. MSU) would get us bowl eligible, that would be a big thing for us.”