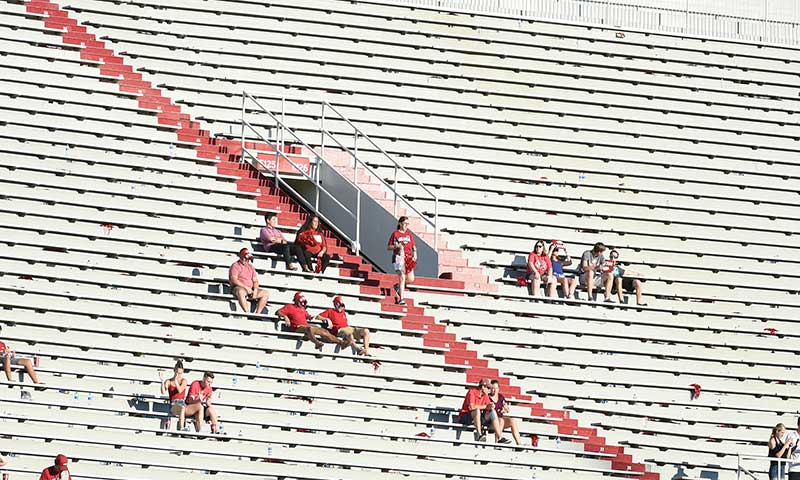 The Razorbacks learned Monday their Nov. 2 SEC West game with  Mississippi State at Reynolds Razorback Stadium will kick off at 3 p.m. and be televised by the SEC Network.

Hicks, flip-flopping throughout the season as Arkansas’ starting QB  with fellow graduate transfer Nick Starkel, took a pounding Saturday going the distance in Arkansas’ 51-10 loss to now No. 9 Auburn. His left (non-throwing) shoulder seems one of many maladies absorbed from three sacks and many other hits while attempting 39 passes. Hicks completed 19 for 182 yards and a touchdown with one interception and one fumble.

“I asked him after the game how he felt,” Arkansas offensive coordinator/quarterbacks coach Joe Craddock said Monday. “He said he felt like he had been hit by a car. So he showed a lot of guts and toughness staying in the pocket. We will reevaluate how he is feeling tomorrow (Tuesday) at practice.”

If healthy, does Craddock start against Alabama?

“That’s something we’ll reevaluate at practice,” Craddock said.  “He could be healthy and still not be 100 percent. We’ll have to see how he’s doing.”

“Ben got banged up a little bit,” Morris said at his Monday press conference. “We’ll see how things are on Tuesday with him. They’ll both (Hicks and Starkel) be out there.”

NO TUA; NO PROBLEM

Tagovailoa suffered a high ankle sprain Saturday during Alabama’s 35-13 SEC victory over Tennessee. He was replaced by redshirt sophomore backup Mac Jones and will not play against Arkansas, Alabama coach Nick Saban announced.

Yet, even without him, the Tide are favored by 35 points over Arkansas by oddsmakers.

“There’s not many deficiencies on that football team,” Morris said.  “You’re a quarterback at Alabama. You’re a really good football player. They have a great supporting cast around him.”

Jones’ six of 11 for 72 yards finishing against Tennessee marked by far his most playing time.

“They're gonna let him do what he does well,” Arkansas defensive coordinator John Chavis said. “There's not enough tape out there to know exactly what that is, but he’s the next guy up at Alabama because he’s a very fine football player. He’s got a good arm, and he can move around a little bit and get away from some pressures.”

And if the Tide goes ground game first, running backs Najee Harris and Brian Robinson have combined for 845 yards and seven touchdowns on 158 carries.

“They may lean on the run a little bit more,” Chavis said. “They've got three or four great tailbacks. We've got to be ready for it all. There's no doubt about that.”

NOT AS MUCH LEFT

“Myron played better,” Morris said. “He was a little bit more consistent at left tackle. Kirby Adcock got in when Capps went down. When you’re going against what he was lined up against, it was pretty rough sledding. But I think he did a good job considering all the circumstances coming at him.”

Cunningham is the left tackle if Jackson is out. Left guard seems more undefined.

“We’re going to try a couple of things,” Craddock said. “I thought Kirby came in and did OK and played hard, gave great effort. But we are going to look at a couple of different guys in there and just see who gives us the best chance.”