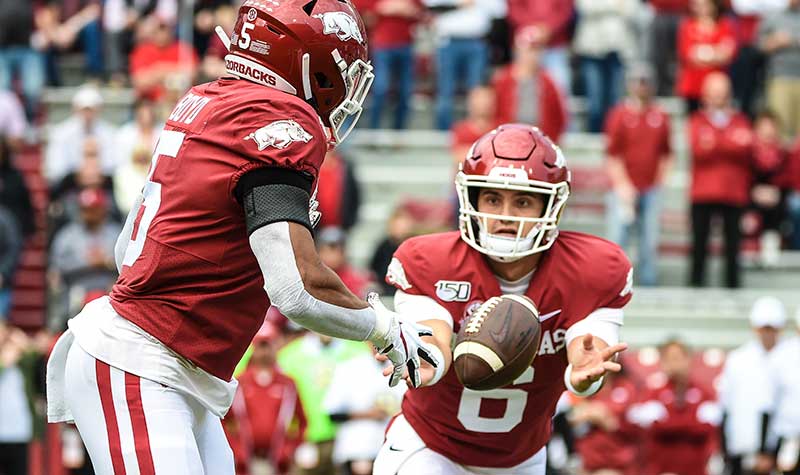 FAYETTEVILLE -  Of the Arkansas Razorbacks known to be injured Saturday during the 51-10 loss to ninth-ranked Auburn, only Austin Capps could not practice Tuesday.

Third-year sophomore Kirby Adcock of Nashville finished the Auburn game in Capps’ place and was working first-team in the first 20 minutes of Tuesday’s practice.

Junior running back Rakeem Boyd (in Craven Whitlow photo above), mostly in a green limited practice jersey since injuring a shoulder two games ago but always playing on Saturdays, worked in green during Tuesday’s full pads practice.

Fifth-year senior graduate transfer Ben Hick (in Craven Whitlow photo above) told offensive coordinator Joe Craddock on Saturday that he felt “like I  got hit by a car” from the hits he absorbed against Auburn. Hicks practiced Tuesday along with fourth-year junior graduate transfer quarterback Nick Starkel.

Starkel had started the previous four games before Hicks, Arkansas’ starter its first two games, returned to a starting role against Auburn.

Junior center Ty Clary of Fayetteville did not take the bait when asked how the quarterbacks were alternated Tuesday.

“I’m not going to lie,” Clary said. “I don’t even know what’s going on with the quarterbacks. I snap the ball to them, and I’m trying to worry about my guy that’s in front of me. I know whoever it is, they’re going to do a good job.”

Clary had just said the line allowed too many hard hits on Hicks and Boyd when it was relayed to him that Hicks said he felt like he was hit by a car.

“I didn’t know that,” Clary said. “It just makes us feel lousy. I hate it a lot. I hate giving up hits more than anything else. I gave up one in the game, and I was kicking myself for it the whole game.”

Clary was asked about Adcock likely starting for Capps beside him at left guard.

“I’m confident in Kirby,” Clary said. “I believe in him and I know he believes in himself. He’s an Arkansas boy, so I know he’ll give it his all out.”

Nobody on this Arkansas team has played the annual SEC West game with Alabama when the Tide wasn’t No. 1.

Especially with Alabama the No. 1.

“It doesn’t matter what the schedule is or what team you are,” Clary said. “Every team in the country plays Alabama like it’s their Super Bowl.”

NO TUA; NO PROBLEM

Arkansas won’t face Alabama’s No. 1 quarterback. Tua Tagovailoa, a leading Heisman Trophy candidate, sits this one out off his high ankle sprain during Saturday’s 35-13 triumph over Tennessee.

“He’s at Alabama for a reason,” Arkansas junior backup middle linebacker Grant Morgan of Greenwood said. “He can sling it. They’re gonna have a different package for him just because he’s a different quarterback. It’s what every team would do. But he’s gonna be able to sling it just like Tua can. He’s a good quarterback.”

Arkansas senior middle linebacker De’Jon “Scoota” Harris paid respect to Jones but said the Hogs do have a shot at rattling the sophomore’s first start.

“We just want to get a lot of pressure in front of Mac Jones’ face,” Harris said. “Make him uncomfortable and get him off the spot. I feel like if we do that, we’ll have a chance just to compete, and you never know at the end what will happen.”

Dicus starred in high school for Garland, Texas, before earning All-American the final two seasons while lettering 1968-70 for the late Frank Broyles’ Razorbacks.