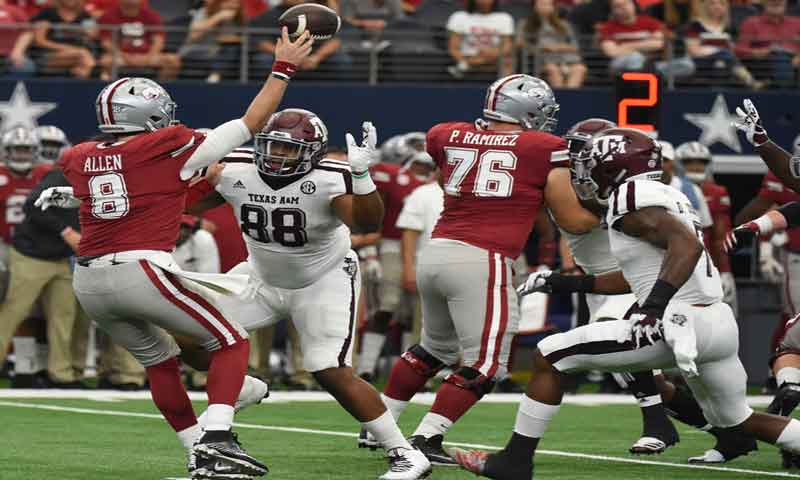 FAYETTEVILLE - Seems nearly impossible for the Arkansas Razorbacks to pump the adrenaline Saturday for the New Mexico State Aggies as they did a week ago for the Texas A&M Aggies.

In fact, adrenaline may be in short supply for Arkansas after a  third overtime heartbreaker (50-43 loss) in six consecutive SEC losses to A&M.

Yet, Arkansas coach Bret Bielema insists his 1-2 Razorbacks will be emotionally sharp for the 11 a.m. non-conference game with Coach Doug Martin’s 17-point underdog Aggies (2-2) of the Sun Belt Conference.

Three weeks ago at a near-capcity Reynolds Razorback Stadium, undefeated TCU manhandled the Razorbacks 28-7. Bielema says his Hogs have practiced angrily this week after another close loss to A&M.

“Tuesday was actually one of our more spirited, live practices since we started fall camp,” Bielema said. “They obviously are very, very upset and angered that we are a 1-2 team and realize we could have done some different things to get to a different spot, but you live the life you are in right now.”

That life is lived losing to Texas A&M again but knowing they gave it all.

“No one can usually say anything (negative) about the efforts of our kids or their demeanor of their attitude,” Bielema said. “So I think the group you saw respond on Saturday is going to be the same group that responds this week.”

Those beatings are ancient history; Martin’s Aggies are impressing in 2017.

“They are a good football team,” Bielema said. “Offensively their quarterback (senior Tyler Rogers) makes it go. He’s a guy who last year split time but this year 17 has been their guy.”

“He has got great composure and a good cast of characters all around him,” Bielema said. "The receiver (Jaleel) Scott is a really, really good player (26 catches for 369 yards and four TDs). Long, athletic, catches the ball well.”

Bielema said Rogers helps his offensive line by “getting the ball out” to beat pressure.

Senior running back Larry Rose III has rushed for 3,990 career yards. Rose has averaged 6 yards per carry this fall.

The Sun Belt named NMSU cornerback Shamad Lomax as its Defensive Player of the Week after he intercepted three passes vs. UTEP, returning one for a TD.

Martin said it was “huge” beating rivals New Mexico and UTEP but cautions that playing Arizona State close in Tempe doesn’t necessarily translate into upsetting or even playing close to Arkansas in Fayetteville.

“Arkansas would beat Arizona State pretty good, I think, just the size and the strength,” Martin said. “It's like comparing apples and oranges. But I think our guys are excited about playing this game. We played Texas A&M and Kentucky last year, so we've been in this arena before. We played Kentucky pretty good. We weren't close to Texas A&M. So it's going to be a challenge.”