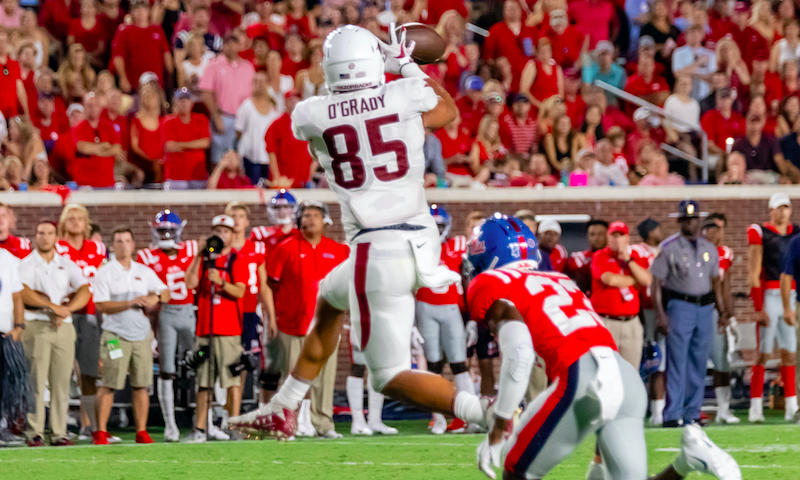 FAYETTEVILLE - Junior quarterback Nick Starkel makes his first start Saturday for Arkansas, but the graduate transfer has taken the first snap before when he was at Texas A&M.

“I think it's the same preparation every week,” Starkel says. “Everyone in the QB room prepares as they are the starter. Obviously, there's a guy running with the ones, but it's really the same preparation for me. I have a little more say in the game plan. That’s really big for me. It's everything I 100-percent know and I know the receivers know 100-percent. If you know something 100-percent you will be playing really fast rather than second guessing yourself do I do this or do that? That's what we're really looking for this week just really playing fast.”

DE SENIORITY
Gabe Richardson started the season as one of three senior defensive ends with four freshmen backing them up. Now, Richardson is the lone healthy senior an set to start vs. Colorado State at 3 p.m. Saturday in Reynolds Razorback Stadium.

Dorian Gerald (strained neck artery) is out for the season and Jamario Bell (out indefinitely with a knee injury since the season-opening 20-13 victory over Portland State).

So does Richardson feel like he’s been baby-sitting prepping true freshman Mataio Soli to start against Colorado State after starting the 31-17 SEC loss against Ole Miss with healthy true freshmen Zach  Williams and Collin Clay in reserve while true freshman Eric Gregory gets closer to playing off a preseason ankle injury?

“Not at all,” Richardson replied after Tuesday’s practice. “These guys are mature. They’re going to continue to grow up. Most were here during the spring so I already had experience with them. They’re going to be just fine.”

NO YELLING HELPS JELLING
Especially, from him he says off a lot of smiles instead of shouts.

“Just be positive,” Richardson said. “They aren’t looking for anybody to be in their face and telling them what to do and how to do it.  You’ve just got to show them.  You’ve got to be positive.  You’ve got to continue to bring that energy and juice. Otherwise they aren’t going to do it as well.”

About the only pressure he applies is the reminder they are not redshirting for the future but integral parts of the now.

Gerald, Richardson and Bell immediately took under their wing rookies Soli, Williams and Gregory when they arrived at the UA in January as December high school graduates and Clay upon his arrival in the summer.

“All of us have really grasped the concept of what we had to do,” Soli said. “ Gabe, Dorian, Jamario, they all helped us. It was a team effort. Gabe is a great leader for all of us. He always picks us up. If we mess up, he’s always there. He tells us what we did wrong. He always tries to keep our head in the right position.”

COACHES WARNED THEM
Though obviously not anticipating two seniors down before the first game’s end, Soli said defensive ends coach Steve Caldwell and defensive coordinator John “Chief” Chavis told him and his fellow freshmen early on to be ready.