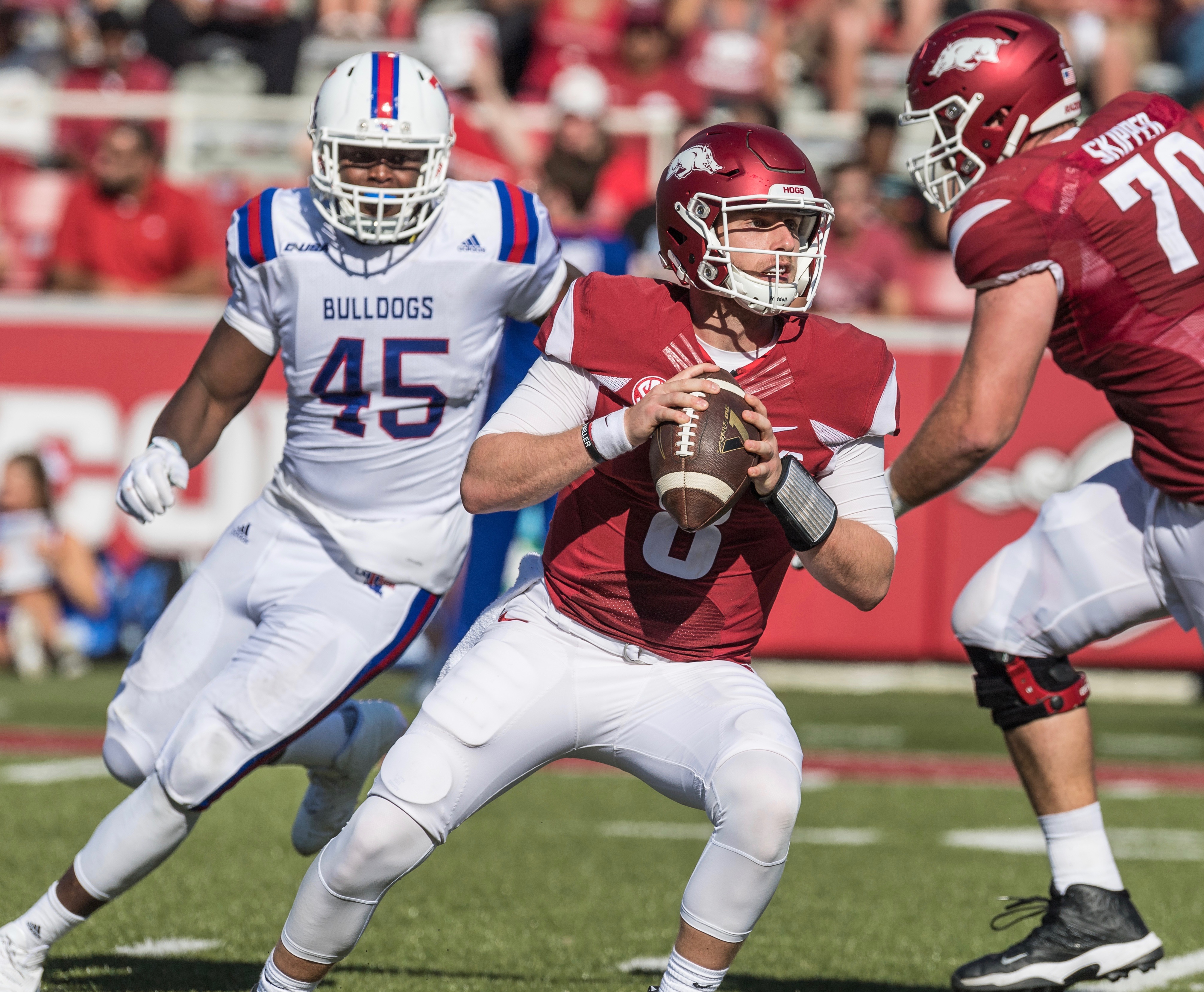 FAYETTEVILLE - By a single point with a Sprinkle on top, Arkansas dodged 26-point underdog Louisiana Tech 21-20 in Saturday’s season-opener at Reynolds Razorback Stadium.

Arkansas junior quarterback Austin Allen (in photo above) survived throwing two interceptions and getting sacked four times in his debut as a starter to overcome a 20-14 Tech lead with a fourth and goal 4-yard touchdown pass to tight end Jeremy Sprinkle. Cole Hedlund’s tie-breaking PAT followed 6:37 left in the game.

An assembled 69,132 went from surprised with a 14-14 first half to morose as Tech thoroughly dominated the third quarter with two Jonathan Barnes field goals and the visiting Bulldogs led 20-14.

Arkansas’ gloom was brightened when Barnes’ 39-yard attempt with 14:14 left in the game glanced no good off the left cross bar.

“We missed a field goal and that was a big momentum swing,” Louisiana Tech coach Skip Holtz said. “It kept it to a one-score game and they took the ball and pretty much ran the ball, ate up a lot of  time and took the go-ahead win.”

Arkansas’ offense, consuming 7:37 on its game-winning scoring drive, and defense, getting the ball back for the offense to run clock the final 3:35 took it from there for Coach Bret Bielema to survive a victorious shave over a 26-point underdog playing its backup quarterback because its senior starter was under DWI-charged disciplinary suspension.

Redshirt freshman freshman quarterback J’Mar Smith played well for Holtz’s Bulldogs, completing 19 of 31 for 212 yards with an interception that ultimately did Tech no harm because the Bulldogs immediately intercepted quarterback  Allen for a second time.

“I know everyone, including myself at the beginning of the day would have liked to have come out here with a larger margin of victory,” fourth-year Arkansas coach Bielema said. “But overall, we did enough things to overcome failure. I don’t know if some of my past teams here would have won that football game. Tech is a very good team and Skip (a Fayetteville High grad and son of former Arkansas coach Lou Holtz honored at Saturday’s game)  had a great game plan and their quarterback did a nice job and got rid of the ball quickly and their defense tackled very well.”

Smith exploited Arkansas in the flat and near the sidelines with effective passing highlighted by receivers Trent Taylor and Carlos Henderson catching eight for 78 yards and six for 71 yards augmented by running back Jarred Craft netting 68 yards rushing, including a 1-yard TD on 12 carries and Smith running for a 9-yard TD.

Both Tech TDs were in the first half on drives following Allen’s interceptions thrown to safeties Secdrick Cooper and Xavier Woods.

Inserting freshman fullback Hayden Johnson and going to the I-formation, Arkansas answered Tech’s first TD on the next series with an 11-play 75-yard scoring drive.  Rawleigh Williams (24 carries for 96 yards rushing) established the run with an 8-yard carry on second and 7 preceding Allen 11-, 16- and 12-yard passes to Drew Morgan, Keon Hatcher and Sprinkle before Williams scored a 6-yard TD. Cole Hedlund’s PAT tied it 7-7 at 6:19 in a first quarter that closed 7-7.

Arkansas punter Toby Baker had punted the Bulldogs back to their 8, their first poor first-half field position, before the Hogs were punted back to their 37 to start their second-quarter scoring drive.

Williams started it busting an 18-yard first down run, Allen saved it drilling a perfect 17-yard pass to senior Keon Hatcher (six catches for 86 yards) on fourth and 7 and finished it by throwing a 13-yard TD pass that receiver Jared Cornelius snared barely above ground.

Smith and Allen each threw second-quarter interceptions. Arkansas right offensive tackle Colton Jackson’s tackle prevented Tech cornerback Prince Sam from returning his theft for a TD instead of 34 yards to the Arkansas 48.

Nevertheless, the Bulldogs tied it 14-14.

Tech whipped Arkansas in every phase of the third quarter but had to settle for Barnes’ 43- and 20-yard field goals as the Hogs defense finally came through when required.

On Arkansas’ game-winning drive, Williams, in his first game since breaking his neck during last October’s Auburn game, and senior Hatcher, lost for the 2015 season with a broken foot, broke Tech’s heart. Sophomore Williams opened the series with four consecutive carries netting 37 yards.

“It’s a play we’ve been working on since last year,” Sprinkle said.  “I fake a block and run a little drag route and hope they don’t see me. I had to find a way to get past (the defender) and Austin put the ball on the money.”

The money wasn’t banked until Arkansas senior Kody Walker plowed 3 yards on fourth and 1 from the Arkansas 37 with under a minute left enabling Arkansas to run out the clock.

“We’ve got to get better,” Allen said. “But we played a heck of a team out there.”