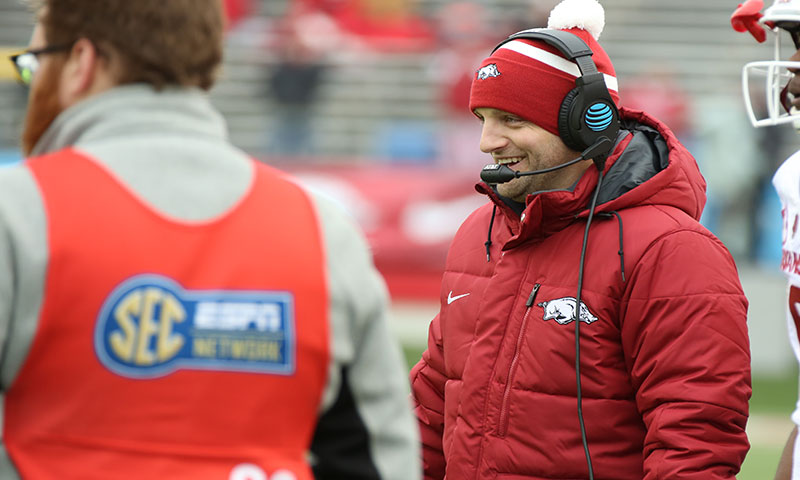 FAYETTEVILLE - Completely closed from the media while practicing Thursday and Friday, the Razorbacks continue their final preseason week.

“No,” Morgan replied. “I think a lot of players are trying to focus one day at a time. I know a lot of people think we’re two weeks away from the game, but for us we are looking at tomorrow. We have a recovery walk-through day, and I think we are going to come into it mentally focused.”

EIU coach Kim Dameron, a former Razorback defensive back and wide receiver lettering for Lou Holtz from 1979-82 and the son of a coach while growing up in Harrison, Rogers and Bentonville, has recruited hard in his native state.

ADCOCK REBOUNDS
Media noticed Tuesday that redshirt freshman left guard Kirby Adcock of Nashville was singled out to do updowns because he jumped offsides.

However, Adcock also was singled out positively for performance last week by offensive coordinator Joe Craddock.

“Kirby Adcock has been getting some reps in there and done some really good things,” Craddock said. “One of the things I've noticed about Kirby since the spring is he has gotten a lot more confidence. He was one of the guys I had to refocus yesterday (Tuesday), but he really responded today and had a good practice. He has done a really, really good job at this point and looks a lot differently physically. Mentally he understands a lot more what we're trying to do than in the spring.”

Adcock has been getting pushed at left guard by former defensive tackle Austin Capps, the junior from Star City moved to offense during the August preseason as the injury bug repeatedly bit the offensive line.

COLORADO ST. ON TV
Arkansas fans can get two TV previews of the Colorado State Rams before Arkansas kicks off its season.

The Rams of Coach Mike Bobo, the former Georgia offensive coordinator for former Georgia coach Mark Richt, just returned to coaching the Rams after being hospitalized since Aug. 11 for neuropathy numbness in his feet. Bobo begins his fourth CSU season off consecutive 7-6, 7-6, 7-6 campaigns.