HOGS run it on 3rd down; Notes 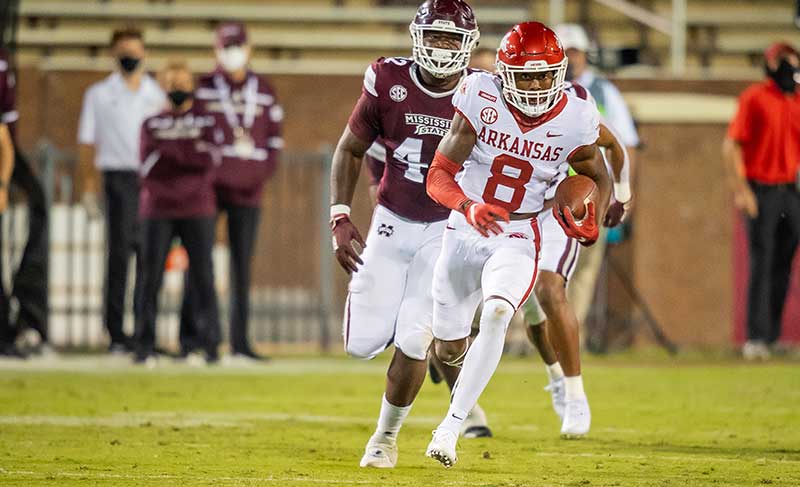 “Coach Pittman has always been an O-line type coach,” senior receiver Mike Woods said after Tuesday’s second of 15 NCAA spring practices. “So even with the receivers, he's always emphasizing blocking and stuff. So, running the ball has always been an emphasis. Blocking on the edge is a major emphasis for the wide receivers especially."

Of course, catching is paramount for receivers. Who in Tuesday’s practice, the final day NCAA-mandated without pads, had good catches?

“I think as a whole the receivers all had a great day today,” said Woods (in C. Whitlow photo above). “We let the freshmen and the threes go for the two-minute drill. I thought we had a strong finish as an offense. The older guys, we did a good job teaching and being alongside of them."

The Razorbacks next practice Saturday.

“They get extra film every day,” Woods said. “Ketron (6-2, 190)  is a bigger dude. Obviously, he'll be tough to cover. He's more physical. Our strength staff is going to get him right for years to come. Then Jaedon (6-3 but only 172) is quicker, fast, cuts. All his cuts are very fast and explosive.”

Woods was asked about Jaqualyn Crawford, the transfer receiver via the Oklahoma Sooners.

“We all know he's a speedster,” Woods said. “He's got a rocket for an arm. It will be a great battle this season."

Jefferson does have starts over his two seasons, including an impressive one subbing for an injured Franks and throwing three touchdown passes in the 48-45 loss at Missouri.

“One thing I've noticed that's been a big difference with him is he's being a lot more vocal,” Woods said. “We have a lot more communication with him and the receivers.”

Catching 32 passes for 619 yards and five TDs last season as an outside receiver, Woods has practiced some in the slot this spring.

“It's going good,” Woods said. “I’m just looking for different ways I can impact and provide service to the team.”

“We’re working a ton with our hands,” Pool said. “Trying to get off blocks, be physical at the point of attack. That’s something we’re going to work on every single day because those are things last year that we struggled with.”

Pass rush was deemed a deficiency last season and was emphasized in the off-season. Last year’s defense often dropped eight defenders in pass defense, which was effective early but caught up with the Hogs later in the season.

So, the linebackers are more pass-rush involved this spring with defensive ends split wider.

“Just things we can do to help out since we only have three down linemen,” Pool said. “We've got to help out in the pass rush. Ultimately that would help our safeties and DBs with as much zone as we play.”

“We kind of dabbled with that last year,” Pool said. “It worked at Tulsa, and I think if we can do it right and get our D-line lined up, it’s going to open up me and Grant (Morgan, the senior All-SEC middle linebacker), and it’s going to be really big for us.”