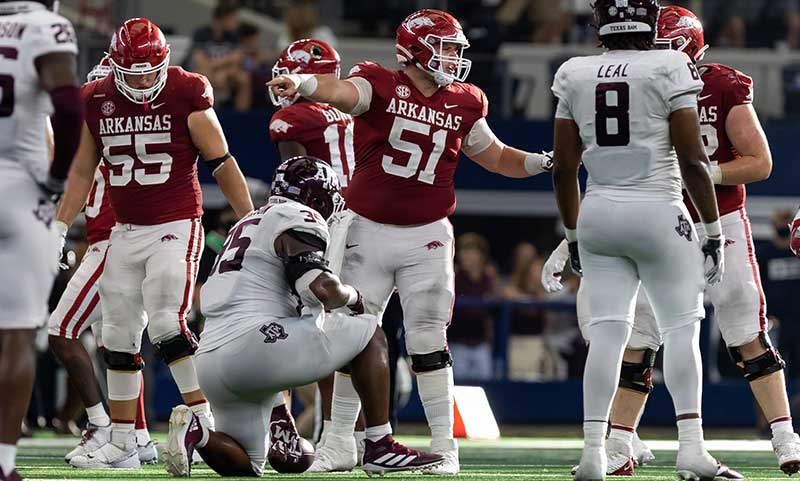 FAYETTEVILLE - In addition to professing his love for Arkansas, junior center Ricky Stromberg said Friday he’s returning to the Razorbacks for his 2022 senior season rather than declaring for the spring’s NFL draft.

Coach Sam Pittman’s 8-4 Razorbacks began their on campus practices Friday for their Jan. 1 Outback Bowl date vs. the 7-5 Penn State Nittany Lions of the Big Ten.

“I had a couple of meetings with Coach Pittman after Missouri (the final game of Arkansas’ regular season). We talked about my grade (from NFL scouts), and I didn't really like my grade at the time. With Coach Pittman and Coach (Cody) Kennedy (Arkansas’ Broyles Award semifinalist offensive line coach), I think it's a no-brainer to come back and go up from there."

Stromberg started every game in 2021 and earned second-team All-SEC by the Associated Press.

“I thought I had an overall good season,” Stromberg said. “I think I do need to get a little bit stronger. I think that'll help. Next year, that's what I'm going to do. I'm going to stay and get a little stronger and it'll definitely help for my senior year."

LIFE AFTER TREYLON
Junior wide receiver Treylon Burks, Arkansas’ first-team All-SEC player on both the AP and Coaches All-SEC teams, on Wednesday declared for the NFL and will not play in the bowl game.

It will take a group effort, including 2021 speedy bonus senior De’Vion Warren and true freshmen Ketron Jackson and Bryce Stephens among others.

“Obviously we know he (Burks) made the best decision for himself and his family,” Morris said. “I feel like he’ll do great things in the NFL. But I feel like it’s the next man up mentality. I have to step up, the young guys have to step up.”

Seems Morris’ numbers start him at the quota’s top.

“I know I’m going to be looked at as one of the guys who needs to step up,” Morris said, “and I’m going to do that. That’s my plan. I’m not going to back down because my good friend’s gone. I feel like this game is another opportunity for me to prove myself and show guys what I’m capable of.”

FRESHMEN COUNTED UPON
Jackson has five catches for 97 yards and a TD. Stephens dazzled on punt returns and was withheld from the Missouri game so he can play in the bowl with the four-game maximum to redshirt. Both could surprise, Morris asserted.

“I feel like Ketron been soaking it all in this season,” Morris said.    "Bryce, he’s real fast. He can play without burning his redshirt so I feel like they’re going to give him a lot of reps.”

MARVELOUS TURNAROUND
Morris marvels that after experiencing nothing but losing Arkansas seasons, he’s bowing out on a winning team in a bowl game.

“I’ve been here, what, five years strong now, and I’ve never been to a bowl game,” Morris said. "It’s a feeling I’ve never felt. So I’m excited. I’m excited for this program and to get it headed on the right track.”

John Ridgeway, the graduate transfer defensive tackle via Illinois State, bet on the Hogs turning it around this year.

“As soon as I got here, I knew this team was special,” Ridgeway said.  “I knew we had the pieces to make this a championship team and go to a bowl game, and sure enough we made it.”

PONDER THE FUTURE
Ridgeway has played such a notable part that he’s been invited to play in the Senior Bowl, a post-Outback Bowl option he ponders along with returning to Arkansas as a 2022 bonus senior.

Montaric Brown, his five interceptions putting him on the Coaches All-SEC first team, also ponders turning pro after the bowl game or returning.

The Razorbacks also practice Saturday before working around next week’s UA final exams.