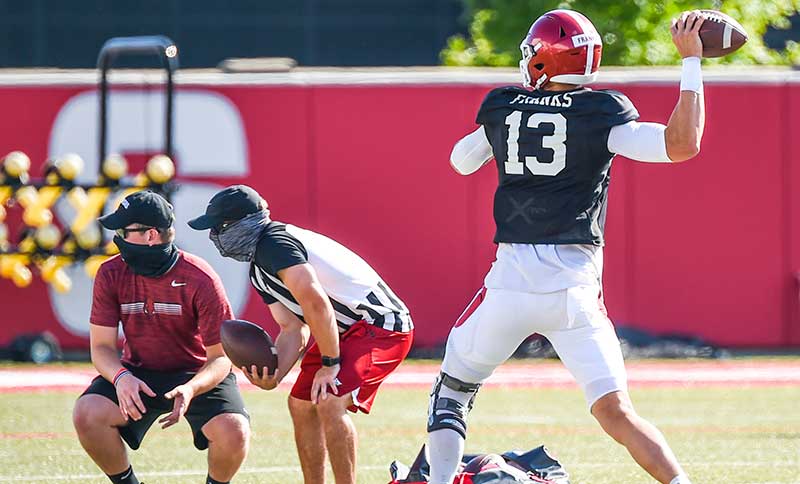 Many players during this covid-19 plagued season have opted out, including preseason All-SEC running back Rakeem Boyd last week. Franks dressed out at Mizzou but did not play.

“Everybody's got an opinion about everything,” Pittman said.  “So last week, (people were) like, 'Well, you know, he's opting out. He's not going to play.’ The kid was hurt. He’s (Franks) not 100 percent now but trying to mend to playable. He's trying to play and it says a lot about him. He wants to play. I have so much respect for that kid.”

“He's got to feel well,” Pittman said. “I mean, would you like to go out there and play hurt against Alabama? I wouldn't. If he's healthy, we're going to put him out there. If he's not, we're not.”

Jefferson’s 18 of 33 passing for 274 yards and three touchdowns with no turnovers against Missouri indicate all is not lost if Franks can’t play.

“Obviously, KJ went in there and played so well,” Pittman said. “It gave us a look into our future.”

DOUBTFUL STATUS
It seems doubtful that senior middle linebacker and Butkus Award finalist Grant Morgan of Greenwood, on crutches during last Saturday’s fourth quarter after a third-quarter knee injury, will play against Alabama.

Senior Hayden Henry and sophomore Andrew Parker have practiced all week in the middle alongside junior starting linebacker Bumper Pool.

BANNER YEAR
Originally a walk-on, Kern lettered three years as a blocker and special-teamer, but he never caught pass. He’s caught 18 this fall for 182 yards with two TDs, one against Tennessee and one against Missouri.

“Blake’s been valuable,” Pittman said. “I mean, just done a really, really good job. I think he played almost every rep last week against Missouri. Hudson … I don’t know, If he plays, it’ll be a limited situation.”

BROWN HEALTHY
Starting cornerback Montaric Brown of Ashdown, injured during the second half against Missouri, has recovered and practiced this week. Pittman said.

Defensive end Julius Coates has not practiced this week and presumably is out of Saturday’s rotation.

Freshman safety Myles Slusher is deemed questionable, Pittman said, but the Hogs have star Jalen Catalon available for the entire game Saturday. Catalon had to sit the first half against Mizzou because of a questionable targeting penalty the previous game against LSU.

Because of covid-19 altering college football in 2020 (10-game SEC schedule), seniors have the option to return senior eligible in 2021 or graduate transfer or enter the NFL draft or simply leave football.

Under the circumstances, Pittman says it’s Senior Day for all.

They are 3-6 and easily could be 6-3 with three losses by a combined seven points.

“This team, the ones who stayed with us, I think they’re proud of being an Arkansas Razorback," Pittman said. "I’m not saying they weren’t in the past, but I’m proud of them. We fought every single game. We believed we could win every single game. They’ll always be the group I think about because of my first ever Division I (head coaching) football job. So very, very, very thankful for that group.”