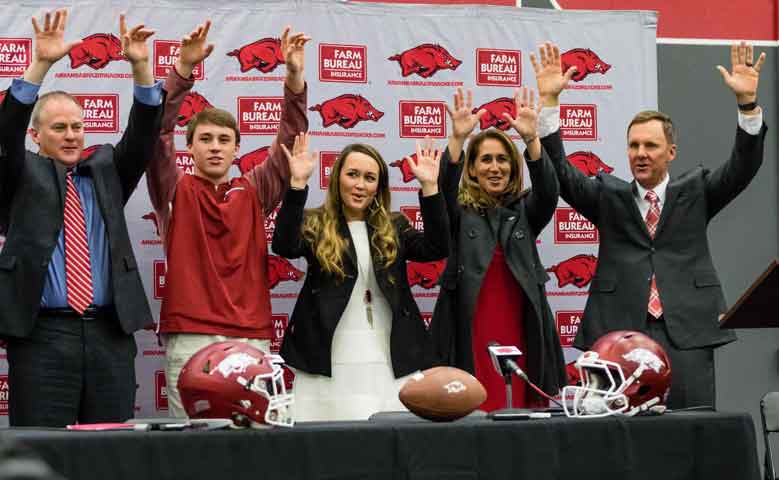 Officially hired Wednesday to succeed Bret Bielema, Morris recalled how Clemson coach Dabo Swinney’s 2010 Tigers had gone 6-7 but were building when Morris joined them as offensive coordinator in 2011.

DeShaun Watson, the former Clemson quarterback Morris recruited, led the Tigers to successive 14-1 seasons and a national runner-up and national championship for 2015 and 2016. Even with Watson in the NFL, the Tigers rank No. 1 and are in the Sugar Bowl as part of the four-team CFP.

It happened there, and it can happen here, Morris told media, staffers and fans Thursday.

Clemson had the tradition and fan base to do it and so does Arkansas, Morris said, citing the Razorbacks tradition that includes 42 bowl games, 13 conference championships and the 1964 national championship (under the late Hall of Fame coach Frank Broyles).

“Clemson came off a 6-7 season and had just gotten beat by South Florida in a bowl game,” Morris said. “So coming in and seeing the similarities to seven years ago and building that program and where the University of Arkansas is right now, the similarities are really scary as you look at how we can build this thing.”

Phillips, a former Razorback player and assistant AD at Arkansas, told Hooten's Arkansas Football last spring: "Look at the resources and what's available, and Arkansas has just as much opportunity as Clemson. Arkansas has the resources to do what it needs to do. There's no reason Arkansas cannot consistently be in the upper third of the SEC. You get to a certain level and stay there, and sooner or later, you're going to win a title."

Morris first coached college football as the offensive coordinator for 10-3 Tulsa team in 2010. As a first-time head coach in 2015 at SMU, he inherited a team that went 1-11 in 2014 and offensively ranked 128th among the nation’ 128 teams playing Division 1 football.

SMU improved to 2-10 in 2015, but after a 5-7 season in 2016, the Mustangs romped this season to 7-5. The Mustangs ranked eighth nationally in offense averaging more than 40 points per game. SMU will play Louisiana Tech in the Frisco Bowl.

Hunter Yurachek, Arkansas’ newly hired athletic director from the University of Houston, described the disparity between SMU’s 2014 team before Morris and the 2017 Mustangs with him.

“We competed against the 7-5 SMU team this year, and I can tell you there was a huge difference in those two programs under his leadership,” Yurachek said. “When I heard that we were on track to hire Chad Morris, I was excited and I was on board from the start.”

Morris is renowned for his innovative, quick-striking, fast-paced no-huddle offenses, but said above all that he’s “a high school coach.”

Morris logged 16 years coaching high school ball in Texas, including three state championships and relationships he said helped him recruit Texans to Clemson and SMU. He brings them now to Arkansas adding to the base he expects to recruit in Arkansas and neighboring states, especially Texas, Louisiana and Oklahoma.

Morris described his offensive style as multiple, “an exciting brand of football that'll be spread sideline to sideline end zone to end zone. We'll go fast and we'll play fast and we'll have fun doing it. Defensively, we'll be built around stopping the run. In this conference, you have to stop the run. I firmly believe that. I'll hire the best defensive coordinator in all of football. That's our standard.”

Morris, complimenting Bielema on the impact the former Arkansas coach wielded on players lives, said he will meet with Bielema’s staff still in Fayetteville.

However, Morris intends to bring in a majority, if not all, new coaches. Morris did not get specific on staffing, especially with SMU readying for the Dec. 20 Frisco Bowl, but Randy Ross, Morris’ director of football operations at SMU, attended Thursday’s press conference.

Morris said it was an emotional parting with his SMU team Wednesday in Dallas and a good first-meeting with the Razorbacks Thursday.

Senior receiver Jared Cornelius, injured this fall after just three games, is eligible for a fifth-year senior hardship season in 2018, if he doesn’t turn pro.

“All indications are he’s coming back,” Morris said. “I know he had an injury this year, and we are going to put a top 10 receiver this year in the draft from SMU. So why not? Why wouldn’t you want to come back and play in something that’s going to be fun and exciting?”