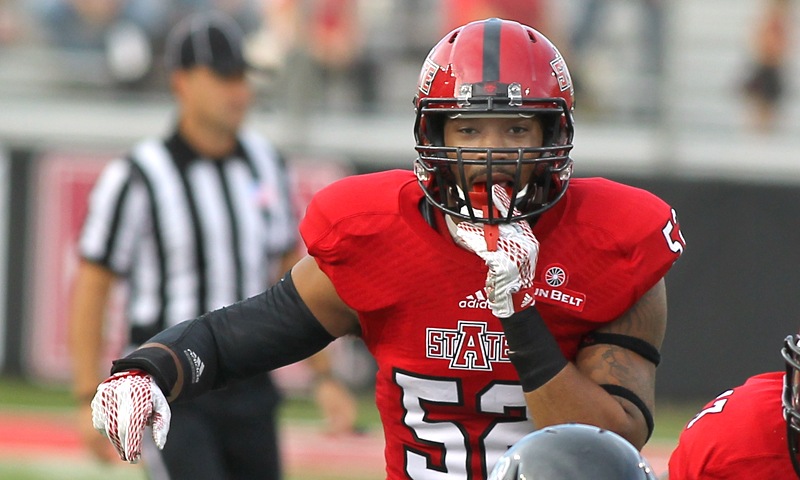 The Red Wolves pile up 605 yards of offense, while the defense forced four turnovers.

The win assures A-State at least a share of the SBC championship for the fourth time in the past five seasons and gives the Red Wolves  at least eight victories in a season for the 14th time in school history.

A-State, 7-0 in league play, can win the Sun Belt Conference title outright with a victory Saturday over Texas State at Centennial Bank Stadium in its regular-season finale.

Fredi Knighten passed for 367 yards and two touchdowns on 23-of-42 passing at NMSU, while Johnston White rushed for a team-high  84 yards and Michael Gordon added 75 yards on the ground. Tres Houston caught seven passes for 155 yards, which is 14th most in a game in school history, and a touchdown, while Dijon Paschal added 116 yards on four catches and a touchdown. The 605 yards of total offense is the second most the team has recorded this season after registering 624 against Missouri State on Sept. 19.

The Arkansas State (8-3, 7-0 SBC) defense got a fumble recovery from Caleb Caston after Xavier Woodson-Luster forced it, while Woodson-Luster, Blaise Taylor, and Quanterio Heath registered an interception apiece. Austin Copeland and Cody Brown led the team with seven tackles each. Taylor tallied the third-most punt return yards in school history with 111, including a 73-yard return that went for a touchdown.

"I don't think you can take going on the road and beating anybody for granted," A-State head football coach Blake Anderson said. "The guys battled every opportunity to stop any momentum they had a chance to pick up. We were solid in all phases and we had a huge punt return. I thought we performed well in all three phases today."

A-State took the lead 14-7 over New Mexico State (3-8, 3-4 SBC) when Knighten plunged in from five yards out to cap an 18-play, 83-yard drive that took more than six minutes off the clock and wouldn't trail the rest of the contest. The visiting team regained possession later in the quarter when Woodson-Luster forced a fumble that Caston recovered at N.M. State's 18-yard line. The Red Wolves only needed one play to find the end zone when White scored his team-leading 13th rushing touchdown of the season to make the score 21-7.

The Aggies scored early in the second quarter when Andrew Allen found Jordan Bergstrom from 12 yards out to cut the A-State lead to 21-14. However, the Red Wolves regained control on the ensuing drive with a 13-play, 75-yard march down the field that ended with a Gordon touchdown run from two-yard out. A-State forced a three-and-out later in the quarter and extended the advantage to 35-14 when Taylor returned the Aggies' punt 73 yards for a touchdown. Neither team could muster much offense the rest of the half to keep the score at halftime 35-14.

Knighten connected with Tres Houston on a 57-yard touchdown to open the second-half scoring and put Arkansas State on top 42-14. It was Houston's 10th touchdown catch of the season and tied the A-State single-season record with John Koldus (1951) and Alfred Bentley (1959). NMSU wasted little time responding as Allen found Gregory Hogan for a 60-yard touchdown to make the score 42-21 with just over 11 minutes to go in the third quarter.

J.D. Houston capped the third quarter scoring with a 34-yard field goal to put the Red Wolves ahead 45-21, which is what the score was at the end of the period. Heath picked off his first career pass and took it 66 yards to the house to make the score 52-21 in the fourth quarter. It was the Red Wolves third interception of the game. New Mexico State added a late touchdown, a 17-yard pass from Nick Jeanty to Teldrick Morgan, to cap the scoring and put the final at 52-28.

N.M. State was led by Allen's 211 yards through the air, while Larry Rose III rushed for 106 yards on 15 carries. Morgan tallied a game-high 10 catches with 84 yards, while Bergstrom led the home team with 110 yards receiving on four catches.

New Mexico State began the scoring in the contest by marching 75-yards in eight plays on its opening drive with a 46-yard touchdown pass from Allen to Bergstrom representing the scoring play. However, the Red Wolves wasted little time striking back with its longest play of the season, a 75-yard touchdown pass from Knighten to Paschal to tie the game at 7-7 early in the opening quarter before the Red Wolves would go on to take the lead later in the period.

Arkansas State returns to action Dec. 5 against Texas State with kickoff scheduled for 2 p.m. The game represents the team's "Senior Day" and can be viewed on ESPN3.