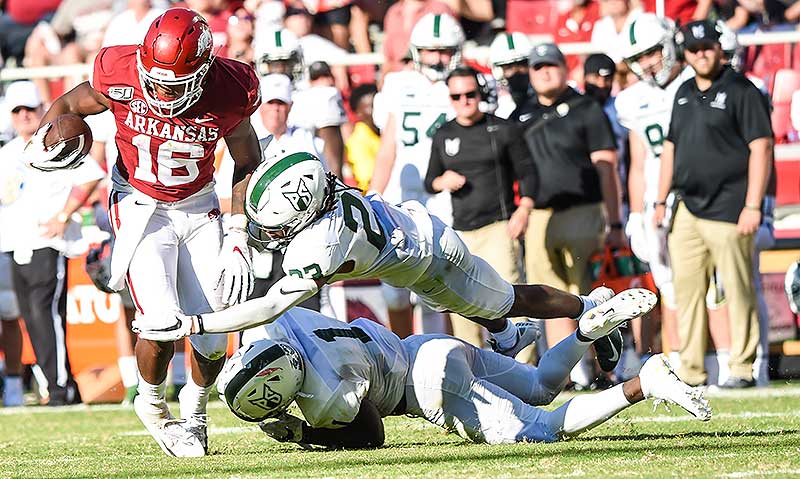 FAYETTEVILLE - Withheld from Arkansas’ 56-20 loss at LSU, junior linebacker Hayden Henry had shoulder surgery and will miss the final game of the season Friday against the Missouri Tigers.

As he did last week against LSU, fourth-year junior Grant Morgan of Greenwood will be the top backup both for senior middle linebacker Scoota Harris and sophomore weakside linebacker Bumper Pool.

Both did some passing in Monday night’s closed practice, and all took some reps during Tuesday afternoon’s closed practice, junior QB Jack Lindsey said post practice. It’s still wait and see whether either Jefferson or Starkel can play Friday, Lunney said.

Fourth-year junior Lindsey, originally a walk-on lettering in 2018 and 2019 as the holder for Connor Limpert’s place-kicks and most of four years serving as scout team quarterback, excelled off the bench with two fourth-quarter touchdown drives against LSU. Lindsey appears the likely starter Friday, if Jefferson can’t go.

True freshman Jefferson got his first career start against LSU.

Lindsey is the son of former Razorbacks tight end Lyndy Lindsey from Ken Hatfield’s 1989 Southwest Conference champions and the grandson of Jim Lindsey, a wingback on the undefeated 1964 Razorbacks national championship/SWC championship team. He had strictly held for place-kicks in games in 2018 and 2019 for former coach Chad Morris before debuting under Lunney last week.

As the coach most recruiting in Arkansas and observing as tight ends coach, Lunney has long liked Lindsey’s quarterbacking potential.

“I thought when we got him to come here on his own dime, we were getting a phenomenal, fantastic walk-on -- the kind of walk on you need here at Arkansas, family ties, legacy, instate, smart, physical traits to be successful at this level. So, all those things have kind of come to fruition for him ... at least they did the other day.”

Three Missouri Tigers from Fayetteville and a former Razorbacks receiver will play against Arkansas in the regular-season finale.

Jonathan Nance (37 catches for 539 yards and five touchdowns for Arkansas in 2016) graduated from UA and transferred to Mizzou, where he is Mizzou’s third-leading receiver with 28 catches for 420 yards and three touchdowns.

And last year while taking a tour upon grad transferring from Clemson where Morris had been the offensive coordinator in the early part of his tenure, Kelly Bryant’s name was chanted by Razorbacks fans on his visit to Reynolds Razorback Stadium before Bryant ultimately chose Missouri.

Lunney was asked about all the Mizzou Tigers with Arkansas ties.

The lone former Razorback and UA grad on the Bret Bielema and Morris staffs and their principal recruiter with Arkansas, Lunney never badmouths the coaches he worked for but clearly would have liked to have signed more out of Arkansas than the head coaches chose.

“I’m always going to be partial and biased toward kids who grow up in this state because I was one,” said Lunney, a Fort Smith Southside’s all-state QB who became UA signal-caller in 1992-95. “When I got an opportunity to do it and to live out a dream, I was vested. The community I came from was vested in my success. I think that is always a real strong foundational point when you identify kids in this state who can help you.”