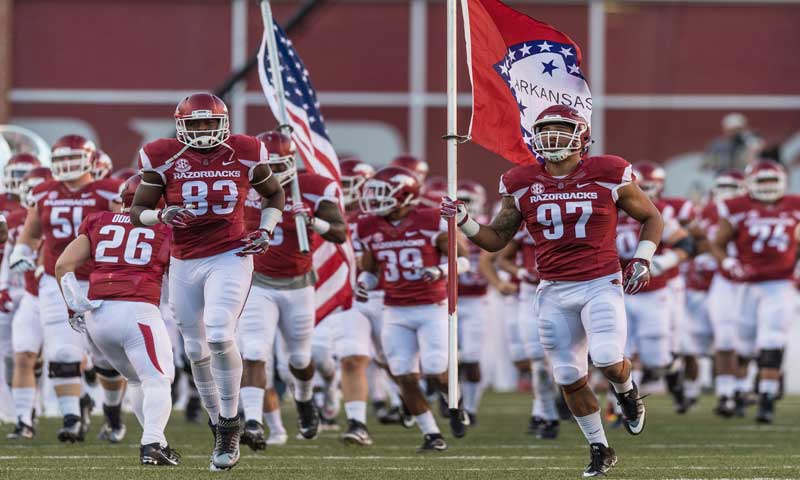 Regarding the Razorbacks (7-4 overall and 3-4 in the SEC West)  visiting Mizzou (3-8, 1-6 in SEC East) at Faurot Field at 1:30 p.m. Friday, Beisel told the Columbia Tribune: “I expect Ar-Kansas (he pronounced it like AR followed by the state of Kansas) to prepare this week. Whether they decide to get on a plane and show up at our stadium on Friday, that’s their call. I’ll tell you what, if they do decide to come, it’s going to be hectic. Our fans are going to bring it, and we’re going to bring it. It’d be a mistake, showing up in Columbia, Missouri.”

“We’re going to take some aggression out on Ar-Kansas this Friday, this Black Friday,” he said. “It’s going to be a black-out game. They’re not going to see what’s coming. If they do decide to show up, like I said, it’ll be a huge mistake.”

“I’m not going to say anything about that,” Cantrell said.  “We’ll figure it out Friday.”

Did Bielema address Beisel’s comments to the Hogs?

“Yeah,” Cantrell said. “We are not really supposed to be talking about it.”

True freshman defensive tackle Sosa Agim of Hope responded, “It gets you a little motivated. It’s just fuel to the fire. We are going to say less and just handle business.”

As an older, established starter, fourth-year quarterback Austin Allen of Fayetteville said a little more than the rookies.

“He's got his opinions, and we'll be ready to go on Friday,” Allen said.

So as an Arkansas guy did you take offense to the “Ar-Kansas” pronunciation?

“Yeah, I did not like that too much,” Allen said. “A lot of the guys, they heard it, and it'll be a good time on Friday for him.”

Offensive line coach Kurt Anderson blew it off in much the same tact that Agim took.

“I told my guys is that it's a rivalry game and things are going to get said,” Anderson said. “We're beyond that. It's irrelevant what he said because at the end of the day, what we need to do is take care of our business. At the end of the day, talk is just talk. You've got to go out there and play the game. … We're not going to let it affect us.”

AUSTIN’S ACTIONS RESPOND
Words will never bother Austin Allen like his performance in the 38-10 loss to LSU did two games ago, which he spectacularly atoned for Saturday by throwing for 303 yards and two touchdowns without a turnover in Arkansas’ 58-42 victory at Mississippi State.

“I didn't like how I played (against LSU), and you try to go in the next week and fix your mistakes and try to play better the next week,” Allen said, “just try to prepare as hard as I can every single week. That’s what Coach (offensive coordinator Dan) Enos preaches all the time. I think everyone bought into that and really got a lot of overtime and it really showed on Saturday in how well we executed.”

It looks no easier for Arkansas’ defense facing a Mizzou offense that set a school record 740 yards offense in last week’s 63-37 SEC East loss at Tennessee.

“Statistically they are the No. 1 offense in the Southeastern Conference,” Arkansas defensive backfield coach Paul Rhoads said Tuesday. “You don’t accomplish those numbers without having good scheme and good personnel and they have both. They have a quarterback (Drew Lock) who can spin it. They have got a bunch of skill players that can get down the field and catch it. They have an excellent running game. We are very respectful of the offense that they have.”

WITTER READY TO ROLL
The Tigers are without their best running back, suspended 1,062 yards rushing freshman Damarea Crockett, formerly of Camden Fairview and then Little Rock Christian. Junior backup Ish Witter is the nine-game starter, who averages 4.7 yards with six TDs rushing for 738 yards.

“He’s a very good player,” Rhoads said. “He’s about 800 yards on the season himself. He’s fast. He’s shifty. You can lose him and he can end up in the end zone in a hurry.”