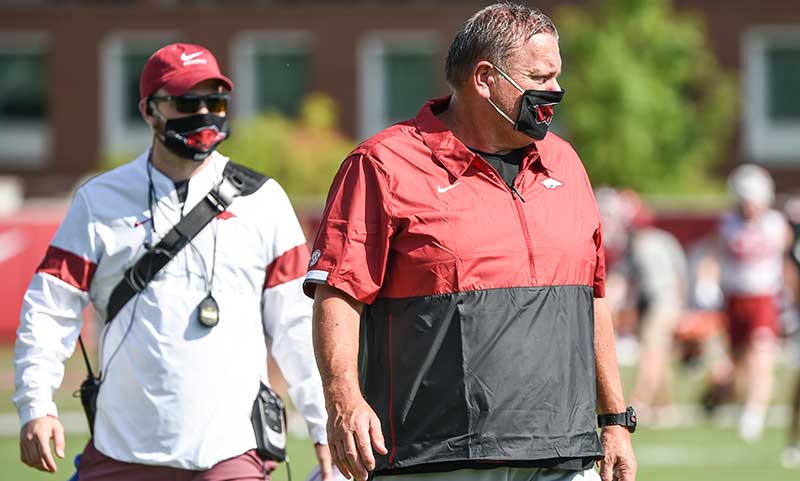 “We had some really big plays, some really dynamic, athletic plays,” Arkansas first-year Coach Sam Pittman said. “But we just couldn’t get it done at the end.  The guy got his hand on the field goal there at the end.  Reed said he hit it well, but it just didn’t work out.”

So Coach Ed Orgeron’s Tigers, the 2019 national champions but struggling   throughout 2020 from players and staff turnovers, and two games postponed because of the covid-19 coronavirus, evened their record to 3-3 and for the fifth straight year keep the Arkansas vs. LSU game’s Golden Boot Trophy at their  Baton Rouge, La. lair.

Pittman’s Razorbacks fall to 3-5 and must play next Saturday’s first half against Missouri in Columbia, Mo. minus star safety Jalen Catalon,  (16 tackles Saturday only behind middle linebacker Grant Morgan’s 19) penalized on a controversial second half targeting call Saturday that automatically carries to the first half of the next game.

The Razorbacks, because of this week’s  covid-19 tests that proved positive or because of contact tracing to Razorbacks  exposed to others testing positive, played Saturday’s game minus defensive linemen Dorian Gerald, Julius Coates, Eric Gregory, Isaiah Nichols, and Xavier Kelly and running backs Rakeem Boyd and Dominique Johnson.

LSU, heretofore struggling to run the ball  but with huge left tackle Dare Rosenthal reinstated from suspension, ran right at the Razorbacks D-line, a makeshift crew other than senior captain/defensive tackle Jonathan Marshall (seven tackles, one for a loss and a pass breakup while double-teamed every down).

The combination of LSU grinding 150 rushing yards while Arkansas, scoring off big plays but otherwise 0 for 10 on third down and possessing  the ball just 18:17 to LSU’s 41:43, proved too much even as the Razorbacks rallied from down 17-7 to lead 21-20 and 24-20, proved too much upon Ward tipping Reed’s kick short.

“LSU had the ball the whole time,” Pittman said. “They probably looked out there and saw some new faces on the D-line and felt like they could possibly have a good running game on us which they did. They rushed  150 yards (actually 149) They controlled the football game. They had an unbelievable amount of possessions and we didn’t.  They were trying to keep the ball away from our offense and they converted and did a nice job.”

The bottom line is probably they could run it and we couldn't. That's probably the difference in the football game.”

Arkansas couldn’t even as  quarterback Feleipe Franks completed 17 of 26 passes for 339 yards. Franks’ fare included  a touchdown  pass of 65 yards to wide receiver Treylon Burks (5 catches for 90) running a 10-yard touchdown himself, and handing off to running back Trelon Smith for a 1-yard touchdown with both drives set up with Franks connections to receiver Mike Woods  (4 catches for 140 yards) and Reed’s 22-yard field goal set up by running back T.J. Hammond’s 29-yard run but settled for after Franks slipped for a 2-yard loss on third and goal from the two during a rainy third quarter.

Franks’ 43 yards led Arkansas’ struggling rushing game and his lone turnover, an interception returned 36 yards to the one by Jabril Cox, set up a  1-yard second-quarter touchdown run by LSU running back Ty Davis-Price, 24 carries for 104 yards as the game’s leading rusher.

Arkansas’ defense secured a fumble recovery turnover by safety Myles Slusher at the Arkansas 29 after an apparent fumble recovery by Arkansas safety Joe Foucha at the LSU 37 was deemed not clearly determined by officials’ review.

The voided fumble not only cost Arkansas  the ball and potential scoring field position but kept its weary defense on the field all the longer.

Pittman was asked about both controversies.

Asked the official’s explanation to him on Catalon’s targeting penalty, Pittman replied, “Man, I’m not going to answer that stuff. It costs me money (the SEC fines coaches criticizing officiating)  and it’s over with. You saw it.”

On the SEC Network telecast color analyst Matt Stinchcomb was free to discuss both plays as he saw them.

“I don’t see that,” Stinchcomb said of the Catalon targeting. “ I don’t know how that call can possibly be confirmed.  I  also don’t know how you can play defense if you are not able to make a play that looks like that.  He turned his entire body sideways.  I didn’t even see any head or neck contact.”

The Razorbacks couldn’t blame their offense’s 0 for 10 third downs on anyone but themselves and LSU’s stout defense.

Pittman was asked if he was especially disappointed with the result after all the third down focus in practice.

“Well, whether we had focus on it or didn't I would imagine we would be disappointed in third down,” Pittman said. “We have to just keep working on it. Anytime you lose by three there's so many points in the game that can go one way or the other. Give LSU credit.  They had a good game plan.”

Finley, 27 of 42 for 271 yards without an interception, threw a second-quarter 30-yard touchdown to receiver Racey McMath and helped set up 49, the game’s first score, and 24-yard field goals by Cade York.

Arkansas’ last drive, including Franks’ 13-yard run on third and 16 and fourth and three pass 7-yard to running back Trelon Smith and 12-yard passes to Smith and receiver Tyson Morris and a 15-yarde to Burks, started at 3:59 from its 25 and ended fourth and three at the LSU 27 warded away by Ward, the replacement for LSU defensive back Eli Ricks who had been disqualified for targeting.

“I have confidence in Reed and I thought we could protect it,” Pittman said of attempting the field goal with 1:24 left.  “I thought we would. There was no doubt in my mind we would make it and we probably would have, but we had it tipped.”