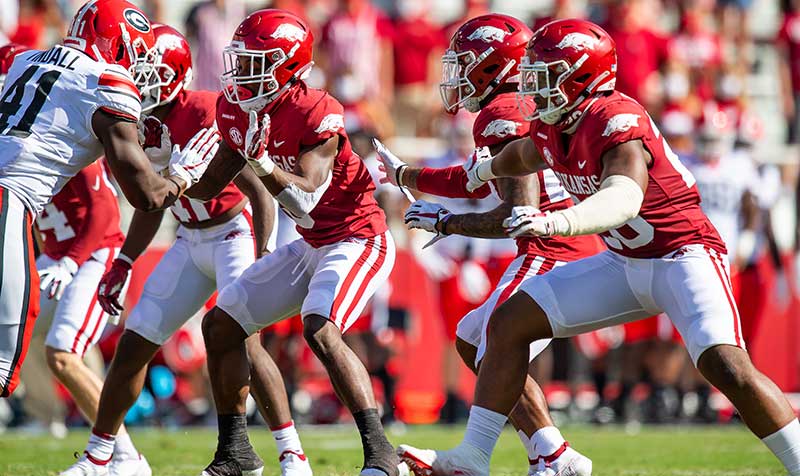 FAYETTEVILLE - Arkansas, with covid-19 positive tests and contact tracing present, and LSU, which had to postpone its game last week due to quaratntines, expect to play Saturday morning at Reynolds Razorback Stadium.

LSU last played on Halloween and lost 48-11 to Auburn.

“We’ve got most of our guys back,” Orgeron said of quarantines fulfilled. “Our guys are ready to play.”

Coming off last year’s 15-0 national championship season, this 2-3 campaign has proven a nightmare of injuries (including quarterback Myles Brennan), opt-outs, players turning pro and too much turnover in players and staff.

Orgeron has revised goals for a struggling team younger than he envisioned. He recalled a stunning 2017 loss to Troy as an impetus for the 2019 national championship.

“We’re a young football team, and I told them we’re building a championship team,” Orgeron said. “Just like after we lost to Troy, we had to get together, get back to the fundamentals and the basics and acquire some grit and some toughness. That’s what we’re doing right now.”

Brennan last played during the 45-41 Oct. 10 loss at Missouri. He is not expected to play at Arkansas, Orgeron said.

Orgeron hasn’t named a starting QB between freshmen T.J. Finley, completing 30 of 45 for 408 yards and two touchdowns vs. three interceptions the past two games, or Max Johnson, 15 of 24 for 172 yards with a TD.

“It looks like it's going to be (Finley) because Max was out with the quarantine,” Orgeron said. “Tuesday was his first day of practice."

“They’ve got a great secondary,” Arkansas wideout Mike Woods said. “I mean, it’s the SEC. Every week we go against talented players.”

“We need to kick it away from them or kick it out,” Pittman said. “One or the other, because they have a great return team.”

Before dealing with the likely absences of players not publicly specified, the Razorbacks lost receiver De’Vion Warren (tom ACL vs. Florida) for the season. They hope for the return of tight end Hudson Henry and offensive linemen Noah Gatlin and Beaux Limmer, unable to play last week.

Pittman was encouraged offensively off the Florida game with running back Trelon Smith’s eight carries for 118 yards, including an 83-yard touchdown run. Smith leads Arkansas with 456 rushing yards and 5.7 yards per carry.

“He had an outstanding game,” Pittman said. “We’ve got to get him the ball more.”

“We put this past week behind us,” Arkansas sophomore nickel back Greg Brooks (29 tackles, two INTs in 2020) said. “We're moving forward.”