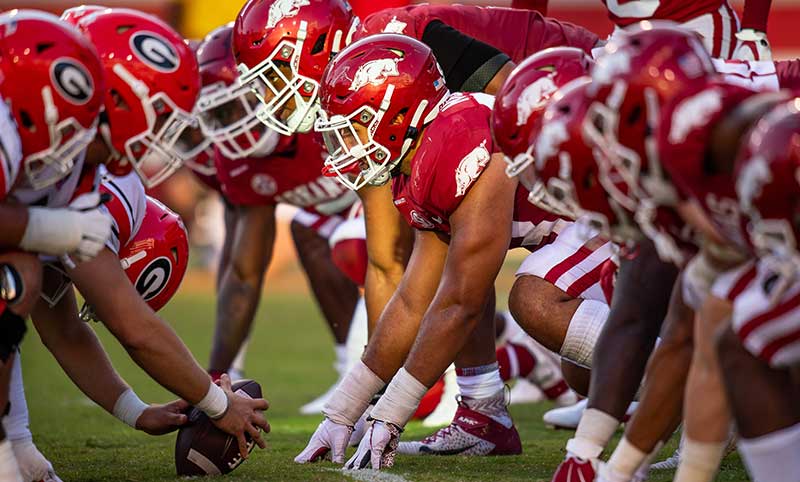 FAYETTEVILLE - Sam Pittman returned in person Wednesday  from covid-19 quarantine to his head coaching job only to find some of his Razorbacks unable to play Saturday against LSU because of covid positive tests or contact tracing quarantine.

Quarantined at home since Nov. 9, Pittman has since tested negative. He was back in the office and practice field Wednesday as the 3-4 Razorbacks ready for Saturday’s 11 a.m. SEC Network televised game against LSU (2-3) at Reynolds Razorback Stadium.

“I’m personally excited to be back at work and looking forward to seeing our football team this afternoon,” Pittman said on Wednesday’s SEC Coaches/Media teleconference.

COVID CONCERNS
Pittman was asked about reports that a sizable portion of Razorbacks either have tested coronavirus positive or through contact tracing are in quarantine and will miss Saturday’s game.

“Well, personally I’m fine,” Pittman said. “I feel good. We’ve had some positive (tests) this week that certainly will affect our football team. But per numbers mandated by the SEC, we’re still within that number, ratio, so we’re looking forward to playing.”

Do the absences include key starters? Do the Hogs have the depth to compete?

“We’ve got an adequate number of people to play,” Pittman replied.

Because the Florida Gators were too numerically covid-19 positive afflicted, the Tigers earlier this season postponed their game with Florida until Dec. 12.

Last week the Tigers had so many positive tests and contract tracing that they postponed their scheduled game last week vs. Alabama. Finally reassembled after last playing on Halloween, LSU wants to play Saturday in Fayetteville.

Under SEC protocol, teams must have a minimum 53 scholarship players available to play a game.

Until the Razorbacks received their Sunday and Tuesday covid tests results, the early-week speculation centered on LSU having enough available players for Saturday.

“We have most of our guys back,” Orgeron said Wednesday.  “By our take from practice yesterday is our guys are ready to play.”

Pittman, in the SEC as an offensive line coach at Tennessee, Arkansas and Georgia before called last December to head coach the Hogs, has personally, including this week, twice thanked Orgeron for his 2019 national championship head coaching success at LSU.

“I think he’s one of the guys that paved the way for non-coordinators because of the success he’s had,” Pittman said Wednesday.

Orgeron opened his teleconference expounding on Pittman reviving the Hogs from the 1-7, 0-8, 0-8 SEC teams preceding him to the current very competitive Hogs (3-4).

“First of all I would like to compliment Sam Pittman and his coaching staff,” Orgeron said. “What a tremendous job they’ve done to turn this Arkansas team around. Outstanding coaching job, and I compliment their players on the way they play. They have a good football team. They will be a challenge for us.”

“I spent two great years there,” Orgeron said. “I love the place. I learned a lot under Ken Hatfield, and I'm going to see him before the game. Dean Weber (Arkansas’ 1973-2008 trainer since 2009 in the Razorback Foundation) hired me up there. Just tremendous guys. They taught me how to be a football coach. I respect the Arkansas program. I'm glad to see Sam Pittman bringing it back.”

THE BOOT
Pittman’s 2013-2015 Arkansas tenure, while coaching offensive lines, includes the 2014 and 2015 17-0 and 31-14 victories over LSU in Fayetteville and Baton Rouge, La. Those were the last times Arkansas beat the Tigers and claimed the Golden Boot awarded annually to the winner of the annual SEC West.

“I remember it was a big deal,” Pittman said Wednesday.   “The guys went over there and grabbed the trophy and all that kind of stuff. Certainly was glad to be a part of that. But it’s 2020, and we’ll have to figure out how to try to get the win this year.”