HOGS prep for No. 2 Bama 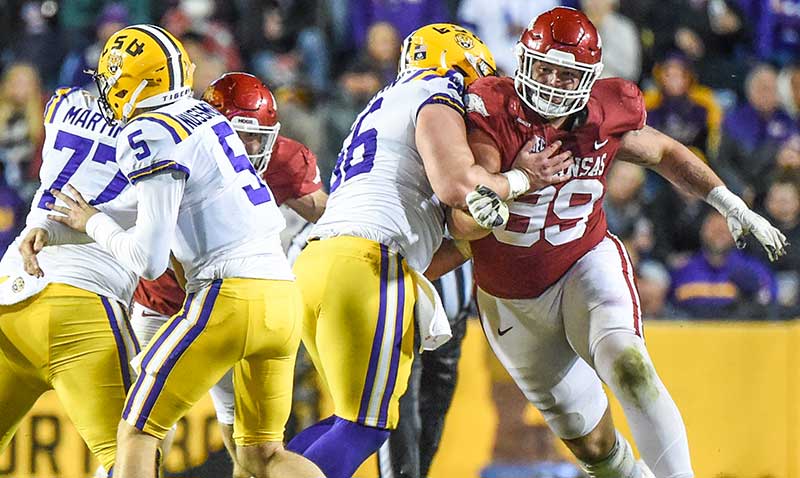 Ridgeway (6-6, 320), a grad transfer senior from Illinois State, has the option to remain in Fayetteville in 2022 because the NCAA granted an extra year for all players due to the 2020 covid disruptions.

“I’m happy for Ridge,” Pittman said Wednesday. “Certainly we’re talking to him. We’d like for him to come back. We think he can increase his draft status, but that’s between Ridge and I, and we’ll figure it out. But that’s (a Senior Bowl invite) a great honor, especially for a guy who came from a I-AA school to reach his dreams.  Certainly proud of him.”

MIDDLE OF PLAN
Regardless what he does about the Feb. 5 Senior Bowl in Mobile, Ala., Ridgeway (#99 in Craven Whitlow photo TOP) figures prominently in this week’s game plan vs. Alabama.

Ridgeway, who got healthy again during the bye week before the Razorbacks won SEC games over Mississippi State and LSU, played outstanding white collar/blue collar roles against LSU.

“He was consistently holding two guys in a gap,” Pittman said. “Anytime your linebackers are playing really well,  probably the O-line is not getting up to them. It’s not a sexy job, but it's a very valuable one. He held the point, made some plays in there. He’s a big man and played with good leverage and good hands. I thought it was one of his best games."

And finally a completely healthy one.

“He had a leg beat up maybe the last two or three weeks,” Pittman said prior to the open date week. “I thought it healed up a little bit better for him. I felt his quickness was better, his strike was better.”

SCOUTING BAMA
Conversely, Pittman needs everyone on offense trying to get a piece of Will Anderson, the Alabama linebacker who lines up all over the place. Anderson has logged 67 tackles this fall, including 12 sacks.

Pittman was asked Wednesday about those assigned to get a piece of Anderson.

PARODI BACK
Withheld from the LSU game because of concussion protocol, punt returner Nathan Parodi likely will return punts and kickoffs against Alabama.

True freshman Bryce Stephens did an outstanding job returning punts against LSU, but Pittman would like to keep him redshirted, if possible.

Stephens has played in three games, and four is the max a player can play and stay redshirted.

The Hogs have three games left: visiting Alabama Saturday, closing the SEC season on Nov. 26 by hosting Missouri at 2:30 p.m. on CBS, and then a bowl game to be assigned after all the December conference championship games.

Pittman prefers Stephens practicing for and eligible to play in the bowl game.

“I think the bowl prep would be better for them, knowing they can play in the game,” Pittman said of Stephens and others with one game left before forfeiting their redshirt season. “So, he's a little bit in that situation. We're not going to play him insignificant reps, but if we need him, we'll go ahead and use his redshirt year. We're very aware of him and would like to hold it until the bowl game if at all possible."