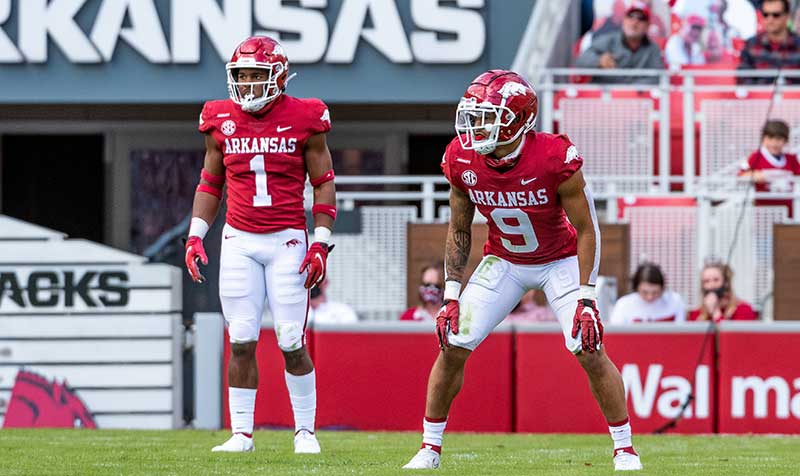 Obviously Brooks (#9 in UA photo above) didn’t. The Arkansas sophomore nickel back starts against those belatedly offering LSU Tigers at 11 a.m. Saturday on the SEC Network at Reynolds Razorback Stadium.

“They offered me at the last second,” Brooks recalled Tuesday. “It was actually on Signing Day. I think Joe (Foucha, the now sophomore Arkansas safety from New Orleans) had the offer.”

Did he ponder it?

Brooks would have been on a national champion had he signed with Ed Orgeron’s 15-0 2019 Tigers.|

But Brooks still seems happy with his Arkansas choice. He even seems reviewing the belated LSU offer as an incentive as these Tigers (2-3) oppose the improved Hogs coming into Saturday’s game for the Golden Boot Trophy.

“It's a little extra,” Brooks said. “I want to get that trophy, especially since we're playing them boys from The Boot.”

Brooks acknowledges he was not ready a year ago when Heisman Trophy-winning LSU quarterback Joe Burrow and his all-star cast of departed receivers whipped the Hogs 56-20.

“I really didn't even know what I was doing last year,” Brooks said. “They just had me in the fire. This year, I'm starting to understand it more.”

That includes giving Florida and Trask their due and realizing the success he’s achieved with 25 tackles and a pick-six touchdown interception in new defensive coordinator Barry Odom’s system.

“We put this past week behind us,” Brooks said. “We're moving forward.”

Arkansas safety Jalen Catalon (#1 in photo above),  an All-SEC candidate after redshirting last year, sees an immense switch from Brooks’ 2019 game to 2020.

“You can just tell he’s got a year under his belt,” Catalon said. “He’s starting to see things a lot faster. I see what he was saying, because this year is kind of like my first year, too. Each game I feel myself kind of progress, and I think that’s what he’s seeing out of himself and starting to make plays that I don’t think he realized he could make.”

“I’ve talked to several different (NFL) guys about him,” Pittman said Tuesday, hoping to return from covid-19 quarantine to Wednesday’s practice. “He’s played his way into a draftable player, I believe. He’s had a really good year and I’m proud for him, and I believe he will get looks in the NFL.”

Notoriously a man of few words, Marshall does not spare his speech on the Golden Boot quest.

“We haven't had that thing since I came in my (2016) redshirt freshman year,” Marshall said. “I really want to get it back and go across there and grab it. That will be a memory that won't be forgotten.”

“I just keep working hard and be a blue-collar worker in the words Coach Pitt said and work my way up there best I can,” Marshall said.

Off his 82- and 47-yard TD receptions from QB Feleipe Franks against Florida, sophomore receiver Mike Woods was made media available after Tuesday’s practice.

“Obviously, it hurts to see De’Vion go down,” Woods said, “but it’s next man up. It’s been that way all year. T-Mo (Tyson Morris) and Trey Knox, those are the guys who are going to have to step up for us. Plain and simple, it’s those two guys.”