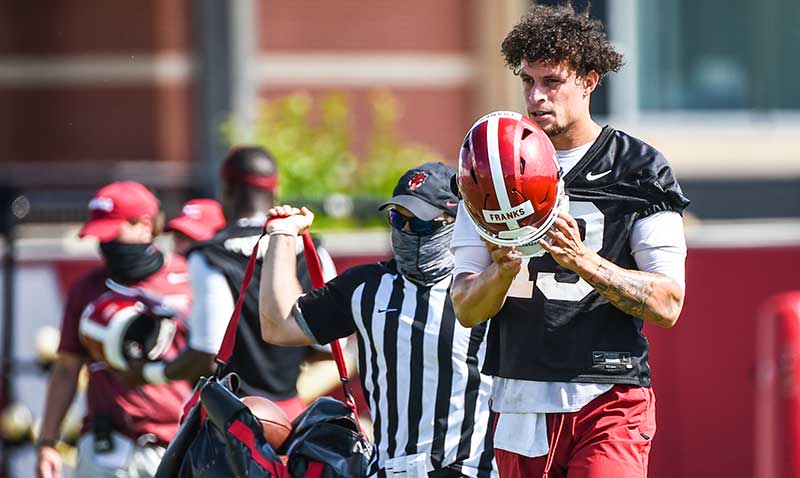 FAYETTEVILLE - Two of the SEC’s hottest quarterbacks duel  Saturday night in a place where both quarterbacked the same team.

Franks (6-6, 238) is Arkansas' tall tale come true as the 2020 grad transfer quarterbacking the Hogs to a 3-3 start that would be 4-2 if not for an egregious officiating error at Auburn.

Trask is setting SEC records while quarterbacking the No. 6 Gators (4-1) going Saturday’s 6 p.m. game on ESPN.

Both arrived in Gainesville as redshirting freshmen in 2016.

Trask was injured all of 2017. Franks, with a Hail Mary pass victory over Tennessee, started the most games in a 4-7 season of QB roulette.

Franks started every 2018 game at Florida, starring for then new coach Dan Mullen. Florida went 10-3 and thumped Michigan in the Peach Bowl

Trask played well off the bench once when Franks struggled.  Then Trask broke his foot and missed the rest of 2018.

In 2019, Franks started the first three games. He and the Gators struggled and trailed Kentucky Week 3 when Franks broke his ankle. That ended Franks’ season.

Trask overcame Kentucky and so fueled the 11-3 Gators that Franks knew he needed to transfer.

After four years of competing and commiserating, the friends battle Saturday night.

“Yeah, we did get along pretty well,” Franks said. “He drove me to get better. I hopefully drove him to get better, and he's playing really well, as well as their team. We have a good relationship, but at the end of the day one person is going to win and one is going to lose.”

That 17-point underdog Arkansas could win speaks glowingly of Franks.

“I knew he (Franks) would be successful wherever they went,” Mullen said.

Franks and Mullen parted more than amicably. Each did so much for the other. Mullen knew the  disservice relegating Franks to second team, if the senior wished to start elsewhere.

“A lot of our discussion was make sure you find the best situation for you,” Mullen said. “I’m really happy for him, and it doesn't surprise me.”

“They have a new coach and a new quarterback at a program that hasn’t won,” Mullen said, “but both of those two came from winning programs. Just follow what we are doing. We know how to win. Obviously they (the Razorbacks) have talent on both sides of the ball. What changed is the mindset. I know Feleipe was probably a major part.”

Franks was and is, Pittman says.

“We count on Feleipe,” Pittman said. “He’s our guy. He's our leader. He's our bell-cow or however you want to say it.”

Franks has completed 123 of 184 passes for 1,428 yards and 14 touchdowns with three interceptions. Since the 37-10 season-opening loss to Georgia and with two interceptions, Franks TD/interception ratio is 13-1 and 6-0 the past two games.

“I’d be lying if I said I haven’t paid attention to it,” Franks said of recent  stats. “But it’s not something that’s my main focus. My main focus is just spreading the ball around to the guys, and they make plays for me. I’d be selfish if I took any credit for that.”

Trask's numbers truly astound. His completion ratio, 125 for 182, nearly mirrors Franks, but he has passed for 1,815 yards and 22 TDs with three interceptions in just five games.

“Kyle Trask plays lights out,” Pittman said. “Lot of confidence and a lot of help. The guy can throw any ball, but he has some outstanding skill players. He’s getting good protection and the guys are getting open, and he’s getting rid of the ball because he knows where he wants to go.”

“He’s not going to force the ball,” Mullen said. “If they’re going to bracket and take away and double people, he’s going to go to who you’re not doubling or covering.”