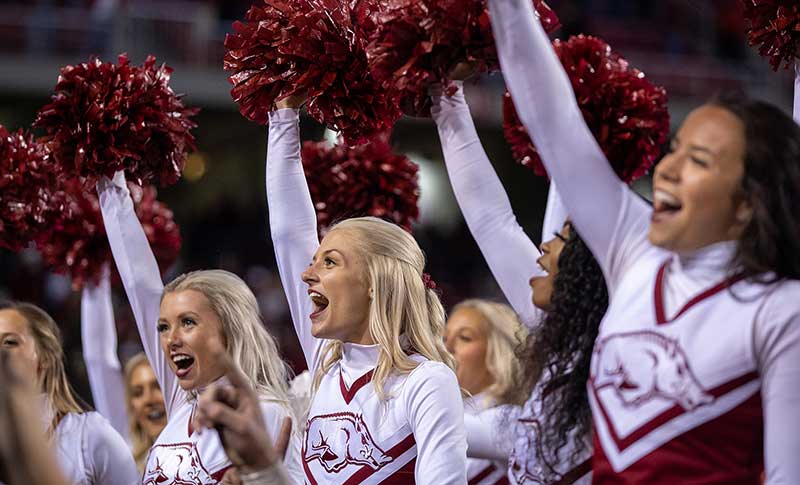 Coach Ed Orgeron’s LSU Tigers (4-5 overall, 2-4 in the SEC) play host to Sam Pittman's Arkansas Razorbacks (6-3, 2-3) at 6:30 on the SEC Network with the rivalry's Golden Boot Trophy on the line. LSU has won five straight in the series.

Orgeron, who guided LSU to an undefeated 2019 national championship, will exit at season's end with LSU slumping to 5-5 last year and 4-5 this fall. LSU pushed No. 2 Alabama last week before falling 20-14.

The Razorbacks rose nationally to No. 8 after a 4-0 start. They fell out of the rankings with three consecutive SEC defeats but blasted bowl eligible into the College Football Playoff Top 25 at No. 25 after beating Mississippi State last week.

“It’s very satisfying,” Pittman said. “It was a goal of ours to get back on the national scene. It’s a big deal in recruiting. We’re trying to make them forget we weren’t a very good team over the past five seasons (collectively 18-41.) We certainly (publicized) that we’re 25th.”

Pittman seeks more, not just for recruiting but for current players. A Saturday success in Baton Rouge would only brighten the future of a team that has played hard every game.

Meanwhile, though a proud program not into moral victories, the Tigers got one last week.

A defiant Orgeron said everyone predicted LSU “to be crushed” last week by No. 2 Alabama. Instead, Nick Saban’s Tide survived 20-14.

This fall, LSU's defense has allowed more than 30 points four times, losing three of those four games. The Tigers rank No. 77 nationally and 11th (out of 14) in the SEC by giving up 27.8 ppg. They drop even lower in the standings at No. 98 nationally and No. 12 in the SEC with 249 passing yards allowed per game.

In its shootout victory (49-42 vs. Florida), LSU running back Tyrion Davis-Price rushed for 287 yards and three touchdowns on 36 carries.

“I anticipate that they'll use some of the things that they did against Alabama,” Pittman said. “But I think any great coach, which Coach Orgeron is, they'll do something in the same look but different results. They'll give us the same look pre-snap and do something different.”

“A great player,” Orgeron said of Burks, a Warren native who grew up an LSU admirer and took a recruiting visit to Baton Rouge.

Orgeron notes it’s a different KJ Jefferson starting nine games this season as a third-year sophomore than the redshirting true freshman who was thrust into a late-season start in 2019 against LSU’s national champions. Arkansas lost to LSU 56-20 and posted a 2-10 record.,

“Always we knew he (Jefferson) could run,” Orgeron said. “But the way he’s throwing the ball ... he throws the ball very well.”

Jefferson has completed 64 percent of his passes this fall for 1,848 yards and 16 TDs with just three interceptions. His 164.7 passing efficiency ranks No. 13 nationally and fourth in the SEC. Georgia senior  QB Stetson Bennett leads the SEC, followed by Tennessee senior Hendon Hooker and Young at Alabama.

The bowl-bound Razorbacks arrive motivated in Baton Rouge. With a night-game crowd behind them and Louisiana native Orgeron still motivating, the Tigers should be primed, too.