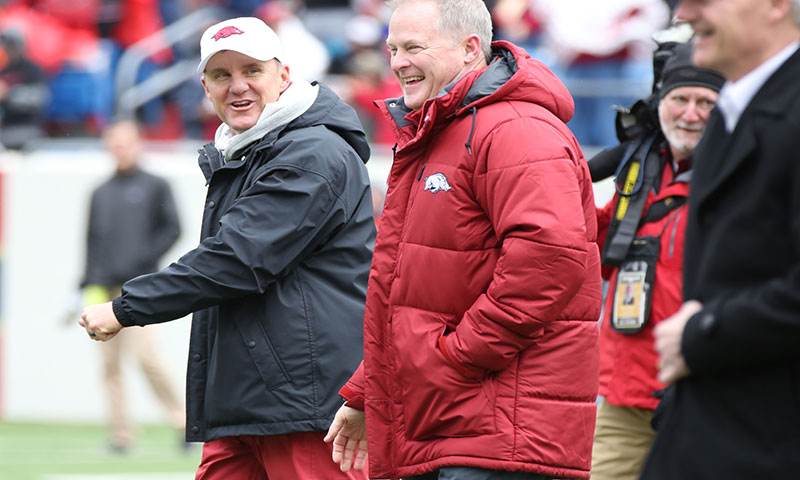 FAYETTEVILLE - Turns out the second half of the last close game Chad Morris coached triggered the beginning of the end of his 22-game tenure at Arkansas.

At Monday’s press conference explaining his Sunday decision to fire second-year coach Morris, Arkansas athletics director Hunter Yurachek described the impact of the second half of the 24-20 SEC loss at Kentucky. It marked the third defeat in Arkansas’ current seven-game losing skid. Arkansas is 2-8 overall, 0-6 in the SEC with two games to play.

And even after a 31-24 non-conference loss to four-TD underdog San Jose State, Yurachek was heartened by the Hogs’ fight in their 31-27 SEC loss to Texas A&M.

“I thought our program had taken some backward steps the past few weeks,” Yurachek said. “I look back to the second half of the Kentucky game. We fought really hard against Texas A&M. We played really well in the first half against Kentucky. I thought our season turned when we couldn’t close out that game and get that win against Kentucky. I thought at that point our student-athletes were starting to lose belief we could actually ever get over the hump with the current leadership.”

“I don’t think we played very well, and I don’t think we competed very well in either one of those (Auburn and Alabama ) games, and we surely didn’t compete very well against Mississippi State or Western Kentucky,” Yurachek said. “I made a definitive decision after the game Saturday night. Chad and I meet every Sunday, and we had met after the Mississippi State, and he understood from that meeting that the Western Kentucky game was a really key game for him and his tenure here.”

Yurachek approved Morris’ hiring but in reality didn’t hire because he had not yet taken the Razorbacks’ athletic director job when former UA senior associate athletic director Julie Cromer Peoples led the search that hired Morris to replace Bielema. Yurachek said Morris parts under terms of his contract.

Morris’ buyout over four years is reported to be $10 million.

“Obviously, it’s a challenge for us to take that money from somewhere and apply it to a buyout,” Yurachek said. “But we’ve got a great chief financial officer who has assured me we have the means to do so, and I was comfortable making that change because of that.”

Yurachek said he parts “great friends” with Morris but did decisively address the inevitable question of not granting Morris enough time to rebuild the Razorbacks.

“I didn’t have tremendously high expectations for us this season,” Yurachek said. “But one of those expectations was for us to go out each and every Saturday and compete like the Razorback football program should compete, and I thought we were no longer doing that. And I don’t think that takes time to motivate the players within your program to compete.

I think it was clear over the past couple of weeks that we were no longer competitive.”

“I know I’ve got to get this search right,” Yurachek said. “We cannot afford as a department of athletics to go through this two or three years from now. The timing of this change gives me a little bit longer runway to really do my due diligence on this search and make sure we get the right candidate in here and that we allow that right candidate the time they need to build a program. Obviously it’s going to take steps. That first step is we’ve just got to be competitive."

As for the  coaching search, other than possibly using a search firm just for candidates confidentially to make their availability known, Yurachek made it clear it begins and ends with him until submitted to Chancellor Steinmetz and the Board of Trustees.

“I have developed a list of candidates, absolutely,” Yurachek said. “I didn’t put any feelers out to see who’s interested. That’s not fair to Coach Morris for me to go out behind his back and see who may be interested in the position while I still have a sitting head coach.

But (with Morris dismissed) I will start that today and work through a list of candidates and add it up to see who truly is interested. I have no doubt we will have a strong candidate pool.”

Yurachek said from the meeting he told the team about Lunney coaching them that its reciprocated.

“The kids were really excited about Coach Lunney, I think for the reason we talked about,” Yurachek said. “He’s a Razorback.  He’s walked in their footsteps. He understands what they are going through having an interim coach.”