Hogs: No redshirt, no regrets for senior Drew Morgan 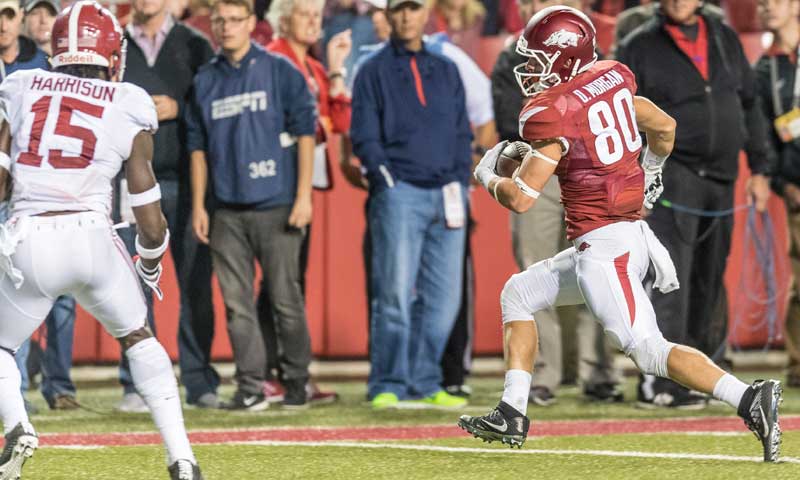 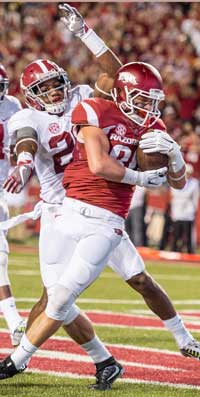 FAYETTEVILLE - After the bowl game when he eyes next season, Arkansas coach Bret Bielema might kick himself for not redshirting Drew Morgan back in 2013.

So Morgan is a senior, playing his final Reynolds Razorback Stadium game Saturday night against LSU with two SEC road games and a bowl game to play.

After 10 catches for 181 yards and a touchdown as a 2014 sophomore reserve, Morgan spectacularly led the 2015 Razorbacks with 63 catches, 10 for touchdowns, and 843 yards. This season, Morgan paces the Hogs with 48 receptions for 515 yards with three TDs.

Morgan’s 2013 seems such a waste. He had zero receiving stats in 2013 playing 10 games as a special-teamer and spare receiver for the 3-9 Razorbacks, winless in the SEC.

Morgan could complain about the wasted 2013 and how he could be returning as a fifth-year senior in 2017.

But he has no complaints. Morgan asserts all his improvement started with the 2013 in-game apprenticeship. That wouldn’t have happened while redshirting, he said.

“I am very thankful that I didn’t,” Morgan said. “The experience my freshman year was great. I never had any regrets not redshirting my freshman year. I know I didn’t get any stats but just being there in the midst of everything, it was a pleasure and it’s paid off. Being there in the moment helped me get more comfortable my sophomore and now junior and senior years.”

If he had redshirted, Morgan wouldn’t be sharing his final game in Arkansas with one of the school's most unique senior classes. It’s a hodgepodge class of players who were signed in 2012 by Bobby Petrino but redshirted in 2012 under John L Smith. In the case of Keon Hatcher, he played for Smith but was injury hardshipped later, Like Morgan, former junior transfers Dominique Reed, Jeremiah Ledbetter, Cody Hollister, etc., were recruited by Bielema.

It’s a special class, Morgan says, and he has special empathy for the Petrino signees.

“It’s Petrino’s last one and he left us with some good ones,” Morgan said. “They are contributing big time this year and last year. We didn’t have Keon last year, but just knowing that I am in the same room with him and sharing the same Senior Day, it’s an honor and a pleasure. I am very thankful for the guys we have.”

Bielema, Enos, and Michael Smith, the fourth-year receivers coach who has coached Morgan’s every move, are thankful for Morgan.

Morgan was among the seniors who challenged the team following the 56-3 embarrassment at Auburn that “we’re not going to let this thing get away from us.” The Razorbacks responded by flogging  Florida 31-10.

Bielema marvels at the king-sized confidence Morgan packages in a 6-0, 191-pound body.

“There’s nothing in this world he doesn’t believe he can’t do,” Bielema said. “He plays every snap like it’s his last. If I could have 10 of him, I would.”

In addition to playing for the last time at Reynolds Razorback Stadium, Morgan is super inspired for LSU.

A rivalry that comes with a huge trophy, The Boot. After consecutive annual losses to LSU from 2011 through 2013, the Razorbacks seized The Boot after skunking the Tigers 17-0 on a frigid November night in 2014 in Fayetteville and last year returned from Baton Rouge with a dominating 31-14 victory.

“I always look at it as The Boot: Arkansas is on top of Louisiana,” Morgan said. “We deserve it. We keep it. Go out and play for it. It’s one of those things we go out with a chip on our shoulder, and we are wearing the boot. It’s a big, big thing for me.”