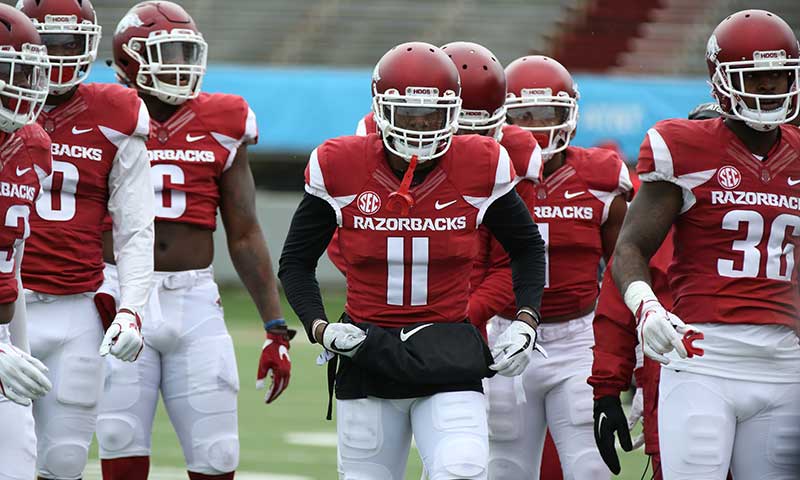 But it would slow down an LSU offense that will try to draw Razorback defenders upfield and toss screen passes for big gains just as Vanderbilt did two weeks ago.

Vanderbilt repeatedly made the Razorbacks pay for their defensive aggression with screen passes to running backs and tight ends en route to a 45-31 SEC success.

The Hogs, idle last week, have tried to seal the screen door that Arkansas coach Chad Morris says LSU will try to open.

“You have to be sound and not get out-flanked, out-leveraged, no motions,” Morris said. “And you've got to retrace. That's something we didn't do a very good job of, and we've got to make sure of that this week. I'm sure they've seen film. They understand what was a big deficiency for us two weeks ago, so we anticipate them throwing a lot of screen passes on us. I would.”

LSU ranks No. 103 nationally and 12th in the 14-team SEC in passing offense, averaging 192 yards per game with an SEC-low six passing touchdowns.

HIT AND MISS
Before the Commodores sailed for 45 points on the Razorbacks, John Chavis' defense pitched a shutout, 23-0 over Tulsa in Fayetteville.

Orgeron knows about Arkansas crowds as a Razorbacks grad assistant to Ken Hatfield in 1986 and ’87 and coaching against the Razorbacks as the head coach at Ole Miss and  as LSU’s defensive line coach and then head coach.

“They put 31 points on Alabama, and we didn’t put any,” Orgeron said. “Obviously we have to respect their football team.”

“They’re progressing on offense,” Orgeron said. “I think Chad has a very good scheme, good quarterback. I know No. 5 (Boyd) is an excellent running back. He hits the hole fast. They have some athletes like they always have. Very strong offensive line.”

The Razorbacks finish their 2018 campaign on the SEC road at 11 a.m. Nov. 17 at Mississippi State and against Missouri at 1:30 p.m, Nov. 23, the Friday after Thanksgiving in Columbia, Mo.

Family and fans from Dumas are coming up for Gibson's Senior Night farewell.

“I know a lot of people said, ‘If it was going to be a late game they could make it,'" Gibson said. "I know my family will be here. I wish my grandma could come to the game but she said, ‘It’s too many people for her.' But she’s coming up to my apartment to stay and will be here after the game. It will be the first time she’s come to Fayetteville. I will be looking forward to.”