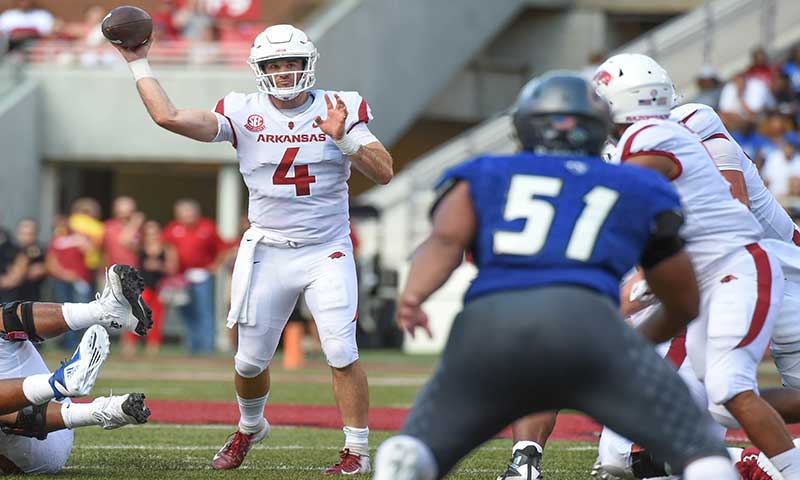 Capps has missed three games in concussion protocol but practiced unrestricted Tuesday in shoulder pads and shorts and apparently will start Saturday.

The 2-7 Razorbacks play host to 5-4 Western Kentucky of Conference USA at 11 a.m, Saturday. The SEC Network will televise the  non-conference game from Reynolds Razorback Stadium.

Either Hicks or Nick Starkel have started Arkansas’ nine games, but Jones and Jefferson took all the first-team snaps Sunday and Tuesday. Jones will start, but Jefferson will play, Arkansas coach Chad Morris said Monday.

Kirby Adcock, who suffered a concussion starting for Capps two games ago against Alabama, did not practice Tuesday. Junior backup linebacker Grant Morgan of Greenwood, removed from the Mississippi State game because of a thumb injury, has returned to practice behind senior starting middle linebacker Scoota Harris.

“Yeah, I told him he’s got to take it easy on us a little bit,” Storey said laughing. “Hopefully they won’t be too hard on us. We messed around a little bit. He’s a great player. Arkansas’ got several great players. It’s going to be a good challenge for us. We’ve got to go in and just execute the game plan.”

Though Morris praised Harris for his play last week, the Hogs’ defense was no challenge to Mississippi State, which amassed a school SEC record 640 yards total offense.

Western Kentucky receiver Lucky Jackson has caught 55 passes this fall, including 16 from Storey during Saturday’s 35-24 loss to Florida Atlantic.

“You talk about Lucky,” Storey said. “We’ve had a really good connection ever since spring ball. He’s a fifth-year senior like myself. It seems like I always know where he’s gonna be, and he’s really good at finding holes in the defense and exploiting them.”