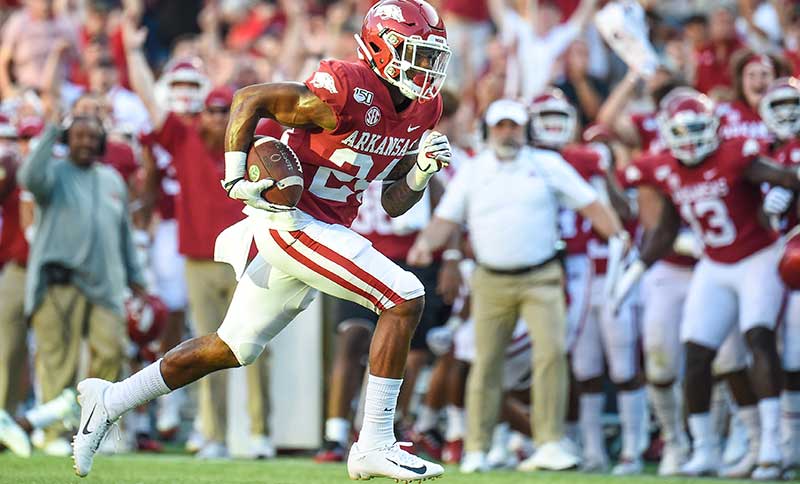 FAYETTEVILLE - Successively drubbed 51-10 and 48-7 by SEC West powerhouses Auburn and Alabama, it was perceived Arkansas could hang Saturday with struggling Mississippi State.

It wasn’t even close.

“Very disappointing from the get-go,” Arkansas coach Chad Morris said afterward. “We had a great week of preparation. No part of the week demonstrated any of that.”

Now 0-14 in the SEC and 4-17 overall during Morris’ tenure that began in 2018, these Razorbacks drop to a bowl ineligible 2-7 overall and 0-6 in the SEC going into Saturday’s 11 a.m. non-conference game against Western Kentucky at Reynolds Razorback Stadium.

Given Saturday’s second half with redshirt freshman quarterback John Stephens Jones quarterbacking a scoring drive he capped with an 11-yard touchdown pass to Mike Woods, and true freshman KJ Jefferson  quarterbacking debut with a 21-yard run his first carry, plus a 32-yard pass to Treylon Burks and then keeping for a 5-yard TD run, the Razorbacks likely will have a different starting quarterback against WKU. Graduate transfer QBs Ben Hicks and Nick Starkel have divvied this season’s nine starts.

Hicks started against Mississippi State, completing four of 13 for 44 yards. Jones replaced Hicks after Hicks threw a pick-six 32-yard interception for a TD to Mississippi State’s Marcus Murphy with 1:59 before intermission. The pick-six accounted for State’s final first-half points.

The Jones and Jefferson second-half TD drives heartened the homecoming crowd craving something positive, but those couldn’t alter that Mississippi State ran over the Razorbacks like armadillos crossing a busy interstate. The Bulldogs rushed for 460 of their 640 total yards of offense.

MSU running back Kylin Hill, 21 carries for 234 yards, amassed three TDs and 198 yards on 13 carries just in the first half. Running back Nick Gibson, also effective in the first half with 54 yards on nine carries, finished with 129 yards, including a 47-yard TD on 12 carries.

Tommy Stevens, the Penn State graduate transfer QB where Moorhead two years ago had been offensive coordinator, was MSU’s surprise starter Saturday. Stevens was the early season starter but after an injury was replaced the past three games by true freshman Garrett Shrader. Shrader did not play against Arkansas.

“I thought he (Stevens) did what they asked him to do,” Morris said. “He ran the ball well and operated their offense extremely well.”

With the Bulldogs thoroughly dominating the line of scrimmage, Stevens netted 74 yards and a TD on 15 carries and completed 12 of 18 passes for 172 yards and two TDs.

“Any momentum you could capture and tried to grab, especially when it was 17-7 ….” Morris said. “Five plays later, they go down and score.  We just never could keep the momentum.”

Without first-quarter points since its season second game, Mississippi State led 14-0 after the first quarter and 38-10 at half. At intermission Hill logged three TDs and 198 of the Bulldogs’ 312 first-half rushing yards.

Stevens rushed for 60 yards in the first half with a 33-yard TD pass to receiver Osirus Mitchell. Gibson, 54 yards on nine first-half carries, did the groundwork with Stevens’ 17-yard pass to Isaiah Zuber setting up Jace Christman’s 26-yard field goal at 14:04 of the second quarter.

Hill scored two second-quarter TDs. MSU’s defense scored the last tally when safety Murphy not only picked off Hick’s pass but returned it for a 33-yard TD with 1:59 left in the half as some in the crowd booed.

Redshirt freshman Jones, become a fan favorite at Alabama by completing six of seven, including the pass for Arkansas’ lone TD coming off the bench for struggling starter Starkel last week against Alabama. Jones replaced Hicks Saturday after the pick. Jones quarterbacked until true freshman Jefferson, cheered even more lustily heading for the huddle, spectacularly debuted. Jefferson opened with his 21-yard with 11:32 left in the game, dished to Boyd for a 17-yard run, completed a 32-yard pass to freshman receiver Treylon Burks and ran for his 5-yard TD.

For the game, Jefferson finished one of two passing with the 32-yarder and two carries for 26 yards while Jones completed four of nine for 25 yards and a TD and netted 3 yards on two carries.

Asked to comment postgame about Jefferson, Morris said, “Well I thought he did a really good job. He got us a drive and scored a touchdown. I was pleased with both he and John Stephen and the the way they kept the fight and kept us moving the football.”

Senior tight end Cheyenne O’Grady of Fayetteville, Arkansas’ leading receiver for the season with 33 catches for 372 yards and three TDs, was suspended and did not play Saturday.

“He was suspended today, and we’ll meet tomorrow,” Morris said.

On Twitter, O’Grady posted, “Beyond blessed to say I had the privilege and opportunity to be a Razorback. I was actually given the chance to live my dream and I will forever be thankful for it.”