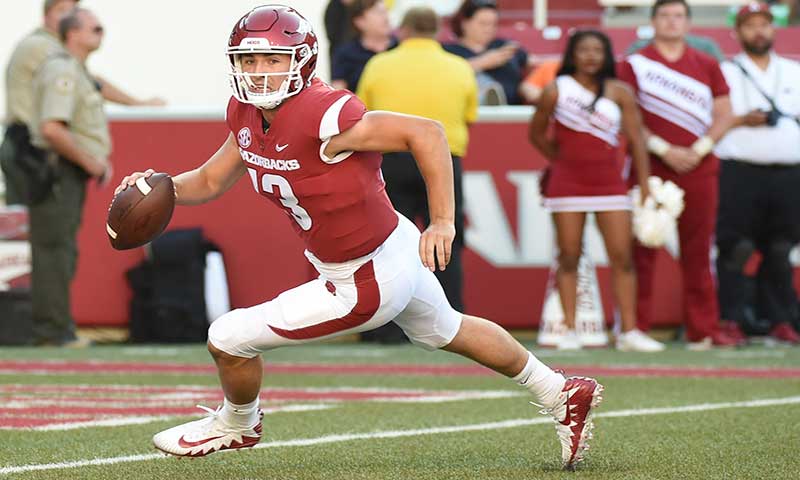 Arkansas (1-6 of the SEC) and Tulsa (1-5 of the American Athletic Conferenc) kick off at 11 a.m. Saturday in Arkansas' homecoming  at Reynolds Razorback Stadium.

Storey left Saturday's loss to Ole Miss because of a head injury during the fourth quarter and has been monitored closely ever since. The fourth-year junior from Charleston was cleared to practice Tuesday and practiced again Wednesday.

"I thought he looked really good," Morris said of Storey's Tuesday's workout. "He was actually the last person on the field throwing to receivers at the end of practice yesterday. Did some good things. We wanted to get him out there. We anticipate him playing right now on Saturday."

THE BACKUP QB
Arkansas has started Storey at QB, including all four SEC games, or third-year sophomore Cole Kelley in two non-conference games.

However, Morris said Wednesday that other than goal-line and short-yardage packages utilizing Kelley's 6-7, 250 size, that true freshman Connor Noland (in Craven Whitlow photo above) of Greenwood is in the backup mix.

"Obviously Cole has got his package of what he's doing," Morris said. "He and Connor have been getting reps and have been for the past several weeks. And (playing either one) will just kind of be a feel for the game, as to how we want to go about doing it. These guys are getting a lot of reps through the course of practice."

PULLING PULLEY
Pulley, Arkansas' best defensive back, was ejected for unsportsmanlike conduct as Ole Miss was running out the clock and leading 33-31.

Because Pulley's ejection did not involve fighting, the SEC told Arkansas the cornerback would not miss the first half of the next game. Nonetheless, Morris was displeased to see a veteran player ejected.

"Ryan got the final clarification from the league office late Monday," Morris said. "We will handle the disciplinary action within our program, and he will miss some playing time Saturday."

"He's done a really good job," Morris said of Brown. "He's going to be a really good football player for us. Just a young kid who's gotten in and gotten some quality reps this year. I'm excited about him and his future. He's practiced well."

KELLY BRYANT
Morris has a recruiting weekend scheduled around the homecoming game. Morris is not allowed to announce it, but Kelly Bryant, the former Clemson starting QB who has put in for a graduate transfer since losing his starting job there, has said he will visit the UA this weekend.

Morris was Clemson's offensive coordinator when he first recruited Bryant.

"Regarding the recruiting weekend," Morris said, "we have two or three official visitors, and we have got quite a few unofficials. We're excited about everybody who will be on campus."