HOGS: Starkel must clean up for UK 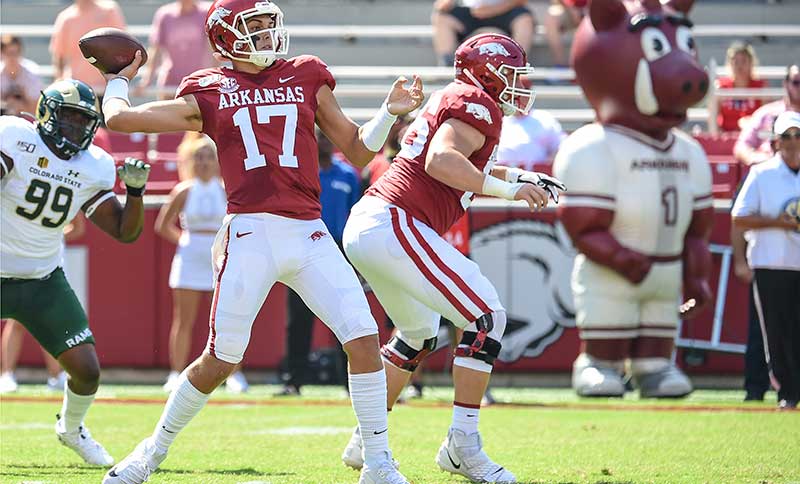 FAYETTEVILLE - Like champagne, Nick Starkel (in Craven Whitlow photo) strives to finish drives with a kick Saturday night, meaning possessions that end by kicking an extra point or a field goal.

Even a punt will do, says Arkansas (2-3 overall, 0-2 in SEC West) head coach Chad Morris going into Saturday night’s 6:30 kickoff at Kentucky (2-3, 0-3 in SEC East). The SEC Network will televise the game from Kroger Field, where UK head coach Mark Stoops can notch his 29th home victory, tying him for second most home wins among UK coaches all-time.

“He’s got to protect the football better, and he knows that,” Morris said. “Not every ball’s going to be a touchdown pass. We want every drive to end with a kick. And if it’s a punt, there’s nothing wrong with that.”

With an open date week since Arkansas last played Sept. 28 in the 31-27 loss to three-TD favorite Texas A&M, Starkel has had plenty of time to heed Morris’ message.

It was reinforced by A&M picking off Starkel’s shovel pass and injuring his elbow as he tried to make the tackle.

“I've got to do a better job of throwing the ball away or hold onto it and just run out there,” Starkel said. “Every possession has got to end with a kick. That's something we've really stressed this week.”

Ironically a graduate transfer via Texas A&M, Starkel said his elbow injury has healed. He practiced every practice last week and this week.

Meanwhile, Ben Hicks, Arkansas original starter this fall, played superbly in relief of Starkel against the Aggies. Hicks completed 15 of 27 passes for 181 yards and a TD without an interception.

Morris feels the better about his quarterbacks than any time this season.

Smith didn’t practice last week during Kentucky’s open date. Despite Smith deeming himself healed, Stoops has said little about Smith’s health this week other than he’s “out there” along with unused sophomore squadman Walter Wood and the intriguing Lynn Bowden,  Kentucky’s most explosive player as its leading receiver, punt returner and kick returner.

Bowden averages 7.6 yards per carry on 13 carries for 99 yards. He has taken direct snaps in the Wildcats’ Wildcat formation. He’s completed three of four  passes, one for 32 yards, and as an ex-high school quarterback has quarterbacked in recent practices.

Morris said he expects Stoops to use Smith and Bowden and warns to not deem  Bowden just a threat to run.

“Obviously he’s just electric with his ability to run the football,” Morris said.   “As a quarterback in high school, you can’t go to sleep on his passing game.”

Oddsmakers pick Kentucky by a touchdown.