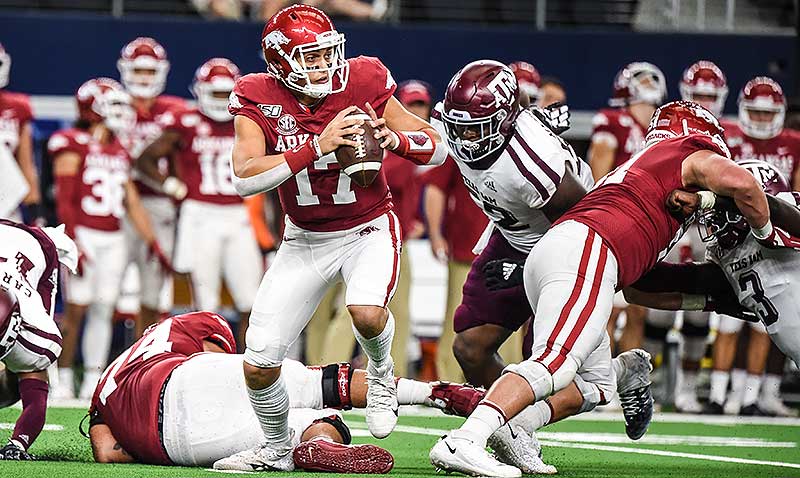 Rakeem Boyd, Arkansas’ top running back, expressed optimism after Tuesday’s practice that both will play against Kentucky and its massive defensive line.

“They are just resting right now,” Boyd said. “Those guys will be fine and back on the field Saturday.”

And if they aren’t?

“The other guys are learning stuff, and in any system it’s next-man up,” Boyd said. “I think going into the game we’ll be fine.”

Previously injured receivers Trey Knox, Mike Woods and De’Vion Warren either sat out or were limited for the open-week practices. They practiced Tuesday and appear to be in the game plan vs. Kentucky. Reserve running back Chase Hayden also practiced Tuesday.

First-team quarterback Nick Starkel injured his left elbow during the Texas A&M game so painfully that he couldn’t grip snaps and was removed from the game. Starkel has practiced all the practices since, including Tuesday’s workout.

“It's doing a lot better,” Starkel said after Tuesday’s practice. “Got all my strength back. Throwing the football around. Feeling good out there.”

Ben Hicks, the early-season starter supplanted by Starkel in the second half of the season’s second game, posted by far his best performance in the A&M game since transferring to Arkansas last January as a graduate transfer from SMU.

“That’s expected,” Starkel said when asked Tuesday about Hicks’ performance. “He’s been in this offense (under former SMU Coach  Chad Morris as  SMU starting quarterback in 2016 and 2017) a long time and that’s it. One guy goes down, another guy’s got to step right in. It’s not, ‘Hey, get ready!’ It’s ‘Stay ready, so you don’t have to get ready.’ That’s what we preached, and he did a great job. I came up to him after the game and I said ‘Hey, I’ve got a lot of respect for you and what you did out there today.”

“It’s basically like a little bruise,” Agim said Tuesday. “A sprain so it’s good to go.”

Agim was asked about Kentucky quarterback Sawyer Smith, who also was injured during his last game.

“He’s a gunslinger,” Agim said. “He can throw it downfield. He’s not the quickest, but he definitely can get a couple yards with his feet. If you clear the pocket for him, he can complete it downfield. I think it was like a third-and-21 when I saw him throw a perfect spiral down the field, like easy for a first down against Florida. So, he can do the job.”

Razorbacks on both sides of the ball praised Smith’s talented impersonation. Bowden has netted 348 yards and a touchdown on 30 catches, rushed 13 times for 99 yards with a 7.6 average, completed three of four passes, and returned three punts for 53 yards, and returned eight kickoffs for 200 yards.

“He’s electric,” Arkansas sophomore cornerback Montaric “Buster” Brown said of Bowden. “He can do anything with the ball.”