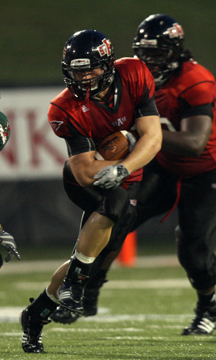 THE PRINCIPALS: Arkansas State and North Texas
carry identical 1-4 records into Saturday's
game, and both have one conference victory
The Red Wolves are on a two-game slide since
notching their first victory against
Louisiana-Monroe on Sept. 18. North Texas
dropped a 28-27 decision to Louisiana-
Lafayette its last time out after picking up a 21-
17 victory at Florida Atlantic the previous
week.

THE ASU-NORTH TEXAS SERIES:
Arkansas State is 11-8 all-time against
North Texas and has won the past five meetings,
including a 31-24 victory at Fouts Field in 2005
that secured its spot in the New Orleans Bowl.
Four of the last five meetings between the two
teams have been decided by a touchdown or
less, including a 30-26 ASU victory last season
at ASU Stadium. The Red Wolves five-game
winning streak against the Mean Green is currently
their longest against any Sun Belt Conference
opponent. The all-time series dates
back to the 1983 season, when NT defeated
ASU 17-0 at War Memorial Stadium in Little
Rock

THE LAST TIME vs. THE MEAN GREEN:
JONESBORO (11/28/09): Arkansas
State then-freshman quarterback Ryan Aplin
piled up 362 yards of total offense and senior
tailback Reggie Arnold added 111 rushing yards
and a touchdown to lead the Red Wolves to a
30-26 Sun Belt Conference victory over the
Mean Green of North Texas at ASU Stadium.
The Red Wolves jumped out to a 27-0 lead almost
midway through the second quarter before
having to old off a big North Texas rally to
claim the four-point win.

AN ASU VICTORY WOULD . . . give it six
straight victories over the Mean Green . . . snap
a three game road skid for the Red Wolves . . .
make the Red Wolves .500 after four league
games for the second time in the last four seasons
(also .500 in 2008) . . . give it seven
straight wins over teams from the state of Texas
dating back to the 2007 season.

LONE STAR SUCCESS: Dating back to the
2007 season, Arkansas State has won its last
six games against teams from the Lone Star
state. The Red Wolves fell to Texas in their
2007 season opener, but came back to sweep
their games over SMU and North Texas before
knocking off Texas A&M, Texas Southern and
North Texas in 2008 and the Mean Green again
in 2009.

Javon McKinnon was named the Sun Belt
Conference Defensive Player of the Week
on Monday after recording a career-high 16
tackles, including a career-best two tackles
for loss, against Louisville last Saturday.
McKinnon's 16 tackles were the most by a
Sun Belt Conference player since the 2008
season, the most by an ASU player since former
SBC Defensive Player of the Year Tyrell
Johnson posted 25 against North Texas in
2005 and tied the 14th most in the nation this
year. His 16 stops were also just four shy of
the seventh most in school history.

WRAPPING UP: Javon McKinnon has now
posted double-figure tackles in each of the
last two games to climb to a tie for third in the
stat in the Sun Belt Conference with 9.2 tackles
per game. He is now ranked tied for 47th
in the nation in tackles and has a team-high
46 (28 solo, 18 assisted) stops. 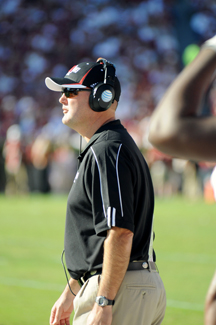 HEAD COACH STEVE ROBERTS: Arkansas
State head coach Steve Roberts is in his ninth
year at Arkansas State after leading the Red
Wolves to the 2005 Sun Belt Conference
Championship and to bowl eligible seasons
three of the last five years. During his first eight
seasons as the Red Wolves' head coach, he

FORCING TURNOVERS: The Red Wolves
posted one interception and a fumble recovery
against Louisville, giving them three straight
games with at least one pick and three games

PLAYING IN THE BACKFIELD: Redshirt
freshman defensive lineman Amos Draper
recorded his second sack of the season and a
career-high three tackles for loss against Troy.
His two sacks are the second most on the team
and his 5.5 tackles for loss rank not only second
in the Sun Belt Conference, but also 55th in the
nation.

ZALUD STEPPING UP: True freshman kicker
Bobby Zalud is ranked third in the Sun Belt
Conference in scoring by kick despite not attempting
a field goal in the Red Wolves' season
opener or two weeks ago against Troy. However,
Zalud is 14-of-14 on extra point attempts
over the last four games and 4-of-7 on field goal
attempts in three of A-State's five games..

BIG PLAY: Arkansas State has run 31 plays
(6.2 per game) this season that have covered at
least 20 yards, including seven last week
against Louisville and a season-high nine
against Louisiana-Lafayette. The Red Wolves
have already ran four plays that covered at
least 53 yards with a long play of 65 yards
(Ryan Aplin pass to Taylor Stockemer) against
ULL. 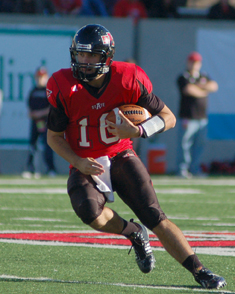 NCAA: Ryan Aplin's school-record 438 passing
yards against Louisiana-Lafayette are the
third most by any NCAA FBS player this season.
Bryant Moniz of Hawaii and Ben Chappell
of Indiana are the only two players to pass for
more yards in a game this season with 532 and
480, respectively. Aplin's 438 yards not only
broke the ASU single-game record, but also
tied UCF's Daunte Culpepper's total in 1998 for
the most ever by an opponent at Cajun Field.
300-PLUS: Arkansas State posted at least 366
yards of total offense in each of its first five
games, marking the first time since the 2008
season it has compiled over 300 yards of offense
in five consecutive outings. The 2008
team posted at least 300 yards of offense in its
first seven games. The Red Wolves recorded
over 300 yards of offense in six games for all of
last season. ASU is currently ranked second in
the SBC and 33rd in the nation in total offense
with 431 yards per game.

BIG BLOCK: Sophomore defensive end Tim
Starson recorded a career-high three blocked
kicks against ULM to tie the most in school history
for a single game. Starson blocked two
extra points and a field goal to tie Stacy Price's
total against UT Arlington in 1981 and Clevon
Johnson's total against UT Martin in 1980.

NICE CROWD: The crowd of 25,219 for the
Louisville game was the fifth largest in ASU Stadium
history. The Red Wolves also drew 23,176 for
their home opener against ULM, which is the
10th largest ever at ASU Stadium. Out of the
18 crowds of over 20,000 all-time at ASU Stadium,
13 have been played within the last 10 years.
The top three attendance averages at ASU
Stadium for a single season have all been set
over the last four seasons.