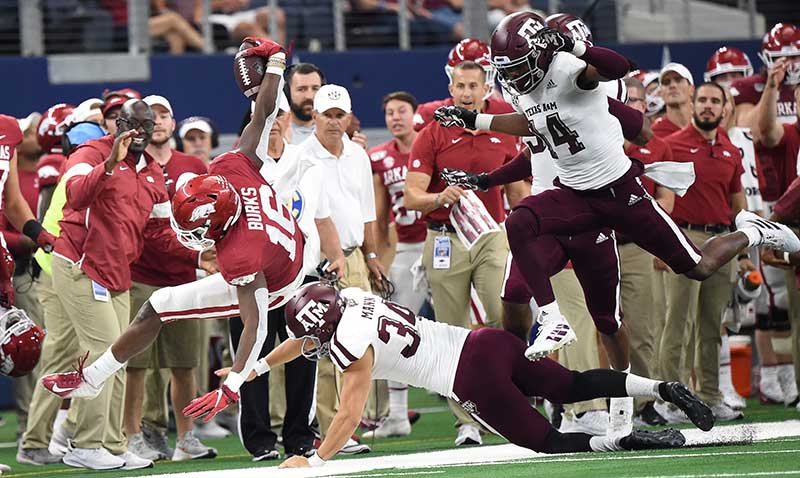 Morris, his staff and the Razorbacks reassemble Sunday in Fayetteville to launch game week for their trip to Lexington. Arkansas will follow its game-week routine of a workout Sunday, Monday as the NCAA-mandated off day, its most physical practices Tuesday and Wednesday and a light practice Thursday before traveling next Friday to Lexington.

STOOPS ON OPEN DATE
“Probably a good time for our team to have a bye,” Kentucky head coach Mark Stoops said. “We have players who need a little extra time to get healed up. Hopefully that'll hit the reset button for us a little bit. We need to build on the good things we're doing and improve in some areas. We have to heal up this week and try to get ahead for Arkansas.”

This week of open-date practices showcased them.

“They're coming along,” defensive tackles coach Kenny Ingram said. “They're still growing and adjusting as freshmen, but they're doing fine.”

Since under a NCAA rule adopted last year, a player can play up to four games and still be redshirt-eligible, look for Miller to work into some of the season’s remaining seven games.

“He's a guy who was a little bit ahead of some of the other guys coming in,” Ingram said. “We're just looking for the right opportunity and right chance to get him some experience out there on the field.”

“Greg has definitely gotten better,” Cooper said. “A&M was probably his best game. He had a hard game two games ago. We did some things technique- and fundamental- and alignment-wise to help last week, and it totally helped. That position has been a position in this defense that’s been mastered by a couple of really good players. I’ve only played one as a true freshman, and that was Tyrann Mathieu (Kansas City Chiefs defensive back called the “Honey Badger” during his All-America days at LSU). He played it and played it really well. Other than that, it’s taken some guys one or two years to get it.”

BURKS LENDS A HAND
Treylon Burks (in Craven Whitlow photo above), the 6-3, 223-pound true freshman from Warren, has played a big hand for these Razorbacks as a wide receiver (13 catches for 230 yards) and punt returner with eight for 97 yards, including breaking a 32-yard return against Texas A&M.

“He wears 5x gloves, which I think we had to order some for him,” receivers coach Justin Stepp said. “He’s got huge hands, and he goes and attacks the ball. He does the same thing on punts.”

Burks catches punts so aggressively unorthodox that Stepp said he cringed the first few times Burks returned them in practice.

“When he started returning punts in fall camp, I was back there trying to coach my tail off and trying to get him fixed,” Stepp said. “And Coach Morris finally looked at me one day and said, ‘Hey, Stepp, just leave him alone.’ There were NFL guys on the sideline at AT&T Stadium (the Dallas Cowboys’ stadium and site of the Arkansas vs. Texas A&M game) who were saying, ‘Man, I’ve never seen a human being catch it like that.’ And I said, ‘I haven’t either, but it works.'”