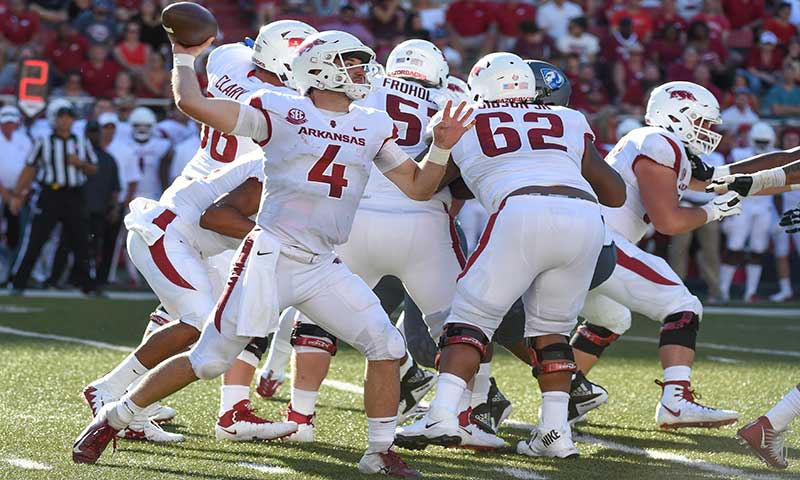 Tuesday was Arkansas’ heaviest game week practice as the Razorbacks (1-4, 0-2 in the SEC West) prep for Saturday’s 11 a.m. ESPN-televised game at Reynolds Razorback Stadium against No. 1 Alabama (5-0, 2-0).

“He was a little under the weather today, but hopefully we can get him out there tomorrow,” Storey said after Tuesday’s practice. “He’s a game-changer as you could see. He provided a huge spark for us.”

O’Grady did watch Tuesday’s practice as Austin Cantrell, Grayson Gunter and Hayden Johnson manned the tight end position already minus Jeremy Patton, who injured his ankle against A&M and posted he had  successful surgery.

“I think it was good he (O’Grady) was out there,” Storey said. “You could definitely see he was still focused on learning and seeing  what we’re going this week. I’m glad that he at least made it to practice. You can tell he was actually invested in it and trying to get his mental reps.”

Cantrell was asked about practicing minus two of his compatriots.

“Last week, we had a couple of guys down, too,” Cantrell said,  “Everybody just steps up. I think the tight ends, even the guys who  don’t get talked about as much, they step up every week whenever something goes wrong.”

“He’s just stepping up every game,” Cantrell said. “Here and there it’s different things, he’s just growing as a QB. He’s our guy. We all trust him, the whole offense does.”

WHALEY OUT
Junior running back Devwah Whaley, concussion two weeks ago after absorbing a hard hit in the loss at Auburn, is in a yellow non-practice jersey and likely won’t play against Alabama.

OTHER MOVES
Since Chevin Calloway, temporarily withdrawing from the team because of personal issues, cornerback Ryan Pulley has been paired with Britto Tutt, Jarques McClellion and Montaric “Buster” Brown at the opposite corner.

Tutt, injured and missing the A&M game, is back at practice, Pulley said Tuesday night, while senior Kevin Richardson of Jacksonville, out the first four games from breaking his foot during a moving accident in August, has reclaimed the starting nickel position he had last year.

“That is another need on the defense,” Pulley said of Richardson’s return to full health. “He is back in the starting position. We need him as a vocal contributor. He knows the defense.”

Pulley said the corners filling in for Calloway "are doing good. We got Jarquez, Buster and Britto back today, so that’s a blessing. Quez has been playing outstanding the last two games. Buster’s still coming on. He is getting used to the speed. Those guys are doing great.”