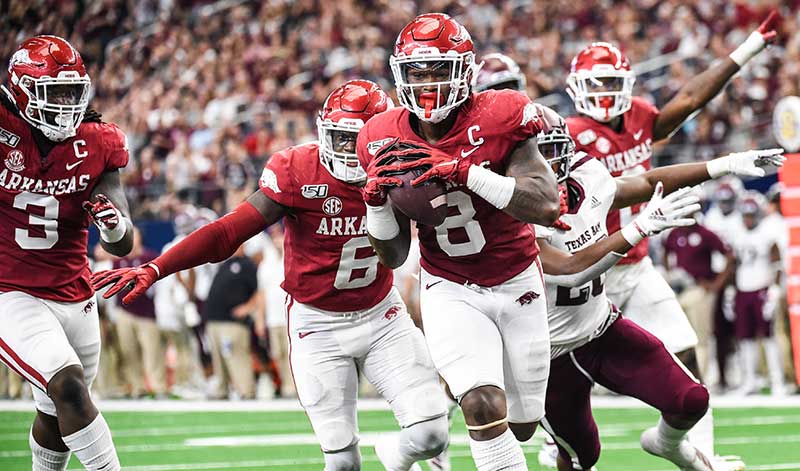 FAYETTEVILLE — Arkansas lost Saturday to Texas A&M 31-27, but some its defenders performed well.

“I think his presence was huge for us up front,” UA defensive line coach Kenny Ingram said. “He did a great job trying to be physical at the line of scrimmage, control the line of scrimmage. He got a big sack and strip. He just applied the things we’ve been doing in practice, got to see it play out in a game.”

Smith and senior tackle Sosa Agim, who missed Tuesday’s practice for unknown reasons, have drawn praise for their work on the interior line.

“They have been around here and are older guys,” Ingram said. “They’ve got a lot of experience. They’ve been able to apply their experience and just been consistent.”

Smith finished with two tackles, including one for loss, a sack and forced fumble against A&M. Ingram says Smith can build off the performance.

Steve Caldwell coaches the defensive ends and praised Jamario Bell, the senior from Junction City who finished with two tackles, including a pair for loss.

“It was good to have him back on the field, and it was his most productive game since he’s been here, most likely,” Caldwell said. “He’s still not full-speed. Looking forward to getting him back in practice and getting him in better shape and see if we can progress from last week.”

“Just kept straining,” Caldwell said. “He kept after it. We call one of them a dirty sack. On the first one he got, they flushed him out of the pocket, and Jamario runs well enough that he was able to make the play. Basically the same thing on the second one. He came off the edge and just kept pressing the tackle and was able to rip off of him. Just staying after it.”

Kamren Curl may be Arkansas' most consistent player on defense. The junior defensive back finished Saturday’s game with 12 tackles, including four solo, to lead the Razorbacks.

“Kam’s been playing really well,” secondary coach Ron Cooper said. “I’m definitely pleased with him. He’s made several plays, several checks. He understands the scheme. He’s put us in some of the right calls when we needed the right secondary coverage check.”

Junior quarterback Nick Starkel practiced on Tuesday. The QBs wear black protective jerseys at all practices, but Starkel had a protective sleeve on his left arm. Starkel was injured in the second quarter against Texas A&M.

Freshman wide receiver Trey Knox, who missed the A&M game, missed  practice on Tuesday. Knox injured his hip in the Ole Miss game and has been hampered though he played against Colorado State and San Jose State.

O’Grady, Boyd and Richardson played Saturday against the Aggies. Jones hasn’t played this season, while Williams missed the past two games. Warren didn’t play Saturday after leaving the San Jose State game with a concussion.

"I thought he moved around real well today,” Caldwell said. "We're just not going to put any pressure on that knee as far as making contact probably until next Monday. I think he'll be ready for Kentucky. That's my plan."

Arkansas will practice at 4:20 p.m. Wednesday. After being off Saturday, Arkansas vs. Kentucky is set for 6:30 p.m. in Lexington. The SEC Network will televise the game.