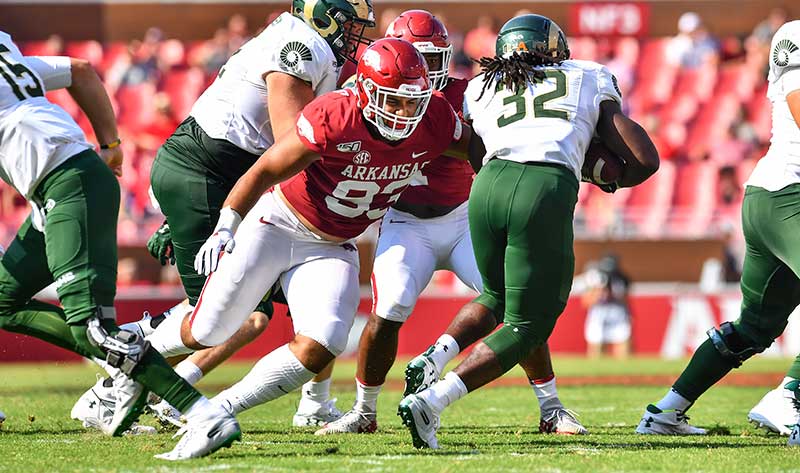 FAYETTEVILLE - Between them in Saturday’s opening loss to Georgia, Arkansas safety Jalen Catalon and defensive end Zach Williams combined for 16 tackles, a sack, a forced fumble and a pass breakup.

Not surprisingly both were requested topics for Arkansas coach Sam Pittman during Wednesday’s SEC Coaches/Media teleconference  before the Razorbacks’ closed practice.

Arkansas led No. 4 Georgia 10-5 midway through the third quarter before losing, 37-10 amid a combination of defensive fatigue and offensive and special teams miscues.

Catalon, a redshirt freshman in his starting debut, sparked Arkansas’ early defensive stand. He made nine tackles, forced a fumble and broke up a pass.

“Zach played some ball last year for us,” first-year Arkansas Coach Sam Pittman noted of Williams’ 12 tackles in nine games for the 2019 Razorbacks. "I thought he played hard. Obviously, he got a sack. So that'll do something for his confidence. We're going to need him for pressure on Costello on Saturday."

CATALON STARS
Catalon drew postgame plaudits. His performance in the second half, however, suffered as the defense played more than 36 of the game’s 60 minutes.

“Catalon played well,” Pittman said. “He missed a few tackles in the second half. We’re working on our tackling, we have all year. But he made some big hits, and he is a leader back there. And for a redshirt freshman he’s a fine player, and we’re awfully happy he’s on our team.”

DIFFERENT CHALLENGE
While Georgia ranks No. 4 nationally because of its defense, while the offense tries to establish an identity since three-year starting QB Jake Fromm turned pro.

Costello, a grad transfer from Stanford, has achieved his Mississippi State identify in one game by throwing all over the field to three receivers netting 183, 158 and 125 yards: wideout Osirus Mitchell (seven catches for 183), running back Kylin Hill (eight for 158) and wideout JaVonta Payton (six for 126).

“Obviously, he (Catalon) has a different set of challenges this week,” Pittman said, “because he’s going to be all over the field because of the Air Raid.

"Man, did they (MSU) look good on film. They had just an outstanding game vs. LSU.”

GETTING ALIGNED
Offensively, the Hogs drilled extensively this week on getting properly aligned in coordinator Kendal Briles’ attack. Getting his own players aligned distracted Arkansas QB Feleipe Franks against Georgia, Pittman said.

“I know that’s part of the quarterback’s job,” Pittman said.  “But it’s hard to look downfield, see what’s going on, see pre-snap reads as a quarterback when you’re looking at your own team trying to get them lined up. We’ve done a much better job of that this week.”

Regarding preparation off Monday and Tuesday’s closed practices, Pittman said, “Our football team has had two really good practices, and they have a great attitude. And I like (against Georgia) the way we ran to the ball on defense.”

Arkansas’ Oct. 10 SEC West game vs. the  Auburn Tigers will kick off at 3 p.m. in Auburn, Ala. on the SEC Network.