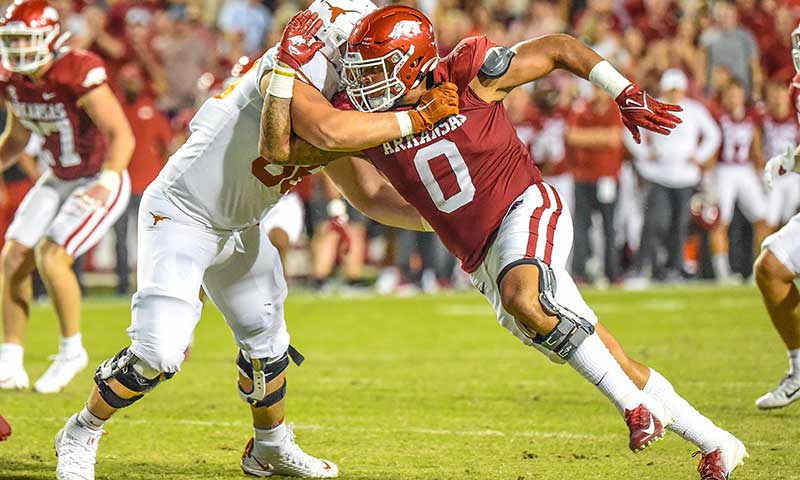 “Well, the similarities are they’re both really big, and they both run to the ball,” Pittman said. “They both play really hard. I don’t know what the difference would be. I know the kids at Georgia better than I did the ones at A&M. I’d say Georgia has a tremendous amount of depth, so they can just roll players and roll players. A&M had good depth as well, but I think Georgia just has more depth. And they’re a little scarier because I’m familiar with what they’re going to do to us and what we have to do to stop them.”

“Not surprised at all,” Pittman said. “I think they've been one or two in the nation in recruiting for a long time. I know they've been Top 5 for a long time. They know how to get it done in recruiting. Kirby understands it's a line of scrimmage league. They have so many good players, but they're really good on the defensive and offensive line, and that's where it starts."

“I’ve got a lot of respect for Sam and his staff,” Smart said.  “They’ve done a tremendous job creating a new culture and energy there at Arkansas. We wouldn’t expect anything less from him.”

“With the portal and the transfer situation and recruiting the way it is, you can turn over a little quicker than maybe having to build it from the ground up.” Smart said. “Feleipe helped last year. He had a quarterback that had SEC experience. Then he is able to play KJ who got experience. A lot of our league is based on quarterback play and how you grow those guys, and they’ve done a really good job of doing that.”

Smart has done well with the transfer portal, via University of Southern California transfer QB JT Daniels getting healthy from a preseason injury in 2020, and traditional high school senior signees recruiting.

“Anytime you use a young freshman as much as Georgia uses Bowers, you know they have unbelievable confidence in him,” Pittman said. “He’s certainly earned that respect from their coaching staff with how much they use him because they use him in a lot of different ways. I just think he’s a really quality football player because he is playing well.”

UNDERRATED CORNERS
Arkansas D-linemen Williams and Ridgeway, linebackers Grant Morgan, Hayden Henry and Bumper Pool and safeties Jalen Catalon and Joe Foucha and shutdown corner Montaric Brown of Ashdown have merited such state and even national attention, that the contributions of alternating corners LaDarrius Bishop, also of Ashdown, and Hudson Clark get overlooked.

This year Bishop has started, but Clark plays plenty

“As long as they’re both playing well, you’re keeping the fresher guy out there,” Pittman said. “As long as they’re both playing well, I’ve become a ‘more the merrier’ type guy. The better off your camaraderie on your team is. Certainly the better off your depth becomes. The two kids seem to handle it well. So at this point, I like how it’s going out there.”