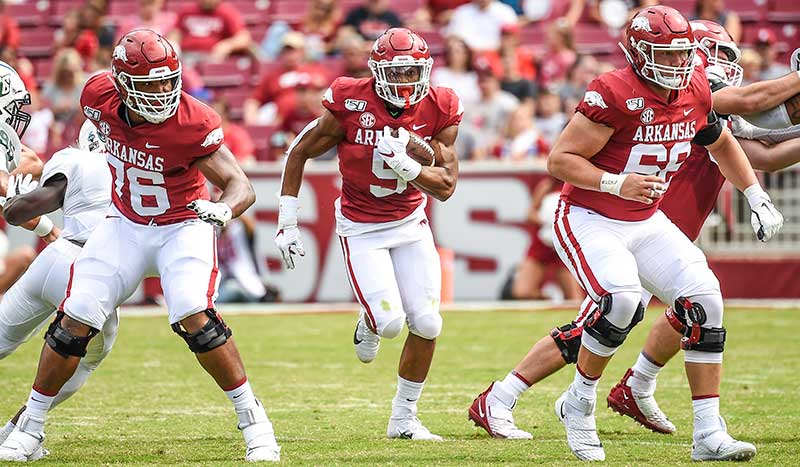 Mississippi State senior running back Kylin Hill rushed for 231 yards last year when the Bulldogs, leading 38-10 at half, routed the Razorbacks 54-24 in Fayetteville.

Hill accounted for 158 of those yards with a TD among his eight catches while running just seven times for 34 yards.

So, Arkansas’ secondary, already concerned about MSU receivers Osirus Mitchell (seven catches for 183 yards and two TDs against LSU) and JaVonta Payton (six receptions for 122 yards) fret about Hill receiving and juking them out of the backfield while knowing they must always be ready in run-support against him.

“Yeah, it’s a lot of crossing,” Brown said. “They try and get people out of their positions. You know running deep.”

Simeon Blair, the ex-walkon sophomore safety from Pine Bluff High getting his first career start in the 37-10 loss Saturday to Georgia, says Leach does not game-plan like a lot of passing teams.

“They’re probably not going to want to take the dink and dunk, the short throws,” Blair said. “They’re a team that wants to get big chunk plays. He (Costello) has a great arm.”

Regarding Hill, Blair said, “just make sure we really get  to the ball every time we find him out of the backfield. Run and hit."

Despite the 37-10 final score, deceptive since Georgia scored one TD on a pick-six theft, two points on a safety and were rewarded great field position by its punter and Arkansas lapses in special teams coverage, the Razorbacks defensively enter this game with confidence.

“I feel like Coach Odom is going to have us in the right spots,” Blair said. “As long as we do our assignments and play as hard as we can, I feel like we’re going to have the result we want.”

Arkansas’ secondary adds depth with the return of DB’s Jarques McClellion and Devin Bush after they missed the Georgia game. Safety Joe Foucha, for whom Blair started, was also unable to practice last week until Thursday.

“Those guys are going to provide depth and rotate with the corners and help us a lot in the Mississippi State game,” Brown said.

Offensively, the Razorbacks hope the rest of their receivers can attack the Bulldogs press coverage Saturday as sophomore receiver Treylon Burks did against Georgia, Burks logged seven catches for 102 yards, including a 49-yard TD.

“I just felt like attack it the way that Coach Briles had game-planned and everything worked out to the best of my ability,” Burks said Tuesday. “I feel like against Mississippi State, we've been working on it. We’re just going to attack.”

“Their (MSU) D-line had a great game,” Arkansas redshirt freshman offensive guard Brady Latham said Tuesday. “We’ve been scouting them. Coach (Brad) Davis (Arkansas’ offensive line coach) has got a great plan for us in pass pro and in the run game. I think all of the guys are locked in, so we’ll be ready for that on Saturday. I think the whole unit is locked in, and we’re ready for the challenge.”