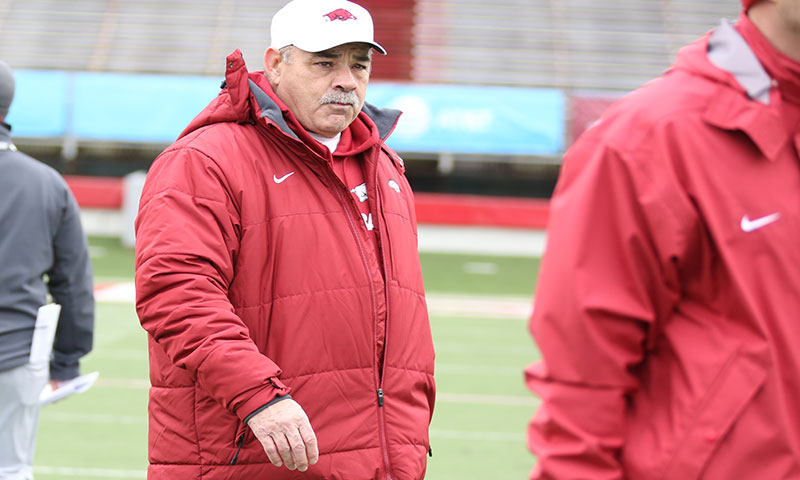 The 2-2 Razorbacks, reeling from a non-conference loss to a Mountain West bottom-feeder, must regroup for Saturday’s 11 a.m. SEC game against No. 23 Texas A&M (2-2) at the Dallas Cowboys’ AT&T Stadium in Arlington, Texas.

“As I said after the game Saturday night and after watching film, our performance was completely unacceptable,” Morris said.  “We got out-coached in every phase. We got out-played in every phase. We got out-executed. It was completely unacceptable and embarrassing. Everyone is being held accountable, and it starts with me. The only thing we can do is go back to work. Our total focus is on getting this football team prepared to compete at our standard Saturday against Texas A&M.”

What exactly does holding all accountable mean?

“Well, I think it’s the performance at all levels from everyone,” Morris said. “Being able as a coach to get your guys to play at a very high level. That’s what I mean holding coaches accountable.”

What about the players?

“Holding players accountable is to get in there and to execute the plan and continue to play, and play fast and play hard and take care of their preparation,” Morris said. “It's accountability for everybody to make sure we’re not overlooking anything or any aspect of our program or any opponent. So that’s on everybody, myself included.”

Craddock and Chavis apologized for their respective units’ part in the Razorbacks sluggish first half trailing, 24-7 at intermission.

The Razorbacks rallied to tie it 24-24 in the fourth quarter but couldn’t stop San Jose State from snapping the tie with a 5-play, 75-yard drive that tallied the winning touchdown at 1:13.

“Pretty embarrassing,” Craddock said. “You know it took us a whole half to decide to play a little bit. And that’s on me, that’s on our coaching staff. We’ve got to make sure our guys are ready to play from the first snap to the last snap. And we weren’t. That falls directly on me and we’ve got to get that right.”

“There's not a whole lot I need to say other we didn't get the job done,” Chavis said. “Obviously the other team was better prepared. We gave up a big play (a 50-yard pass that would have been a touchdown except wide open San Jose State receiver Bailey Gaither stumbled) to start the game. We're gonna find a way to get it fixed. I don't have an answer right now, but it's coming. We're capable of playing much better. But give San Jose credit. They did what they needed to do and were well prepared.”

“It's coming out quick,” Chavis said, “and the receivers did a good job of running routes and getting open and getting the ball. We made some adjustments at halftime that made it a little bit better for us, but it wasn't enough.”

It was enough until Love hit three big passes on the last drive to set up running back Dejon Packer’s 19-yard touchdown run.

Offensively, while passing Arkansas back into the game, graduate transfer quarterback Nick Starkel (25 of 50 for 356 yards and three touchdowns) threw five interceptions.

Morris and Craddock both said as the Hogs fell behind Starkel “tried to do too much.”

“I thought we pressed,” Morris said.  “I thought that we were trying to make a 14-point play. I think we, me as a coach, we’ve got to do a better job of preparing him for exactly what we’re asking him to do. That’s on me. That’s completely on me. That’s not on him.”

Saturday’s availability against Texas A&M for junior receiver/kick returner De’Vion Warren, concussion during the San Jose State game, won’t be determined until later in the week.

The Razorbacks practiced Sunday, used Monday as their NCAA mandated off day and Tuesday will wage their heaviest practice of the week.