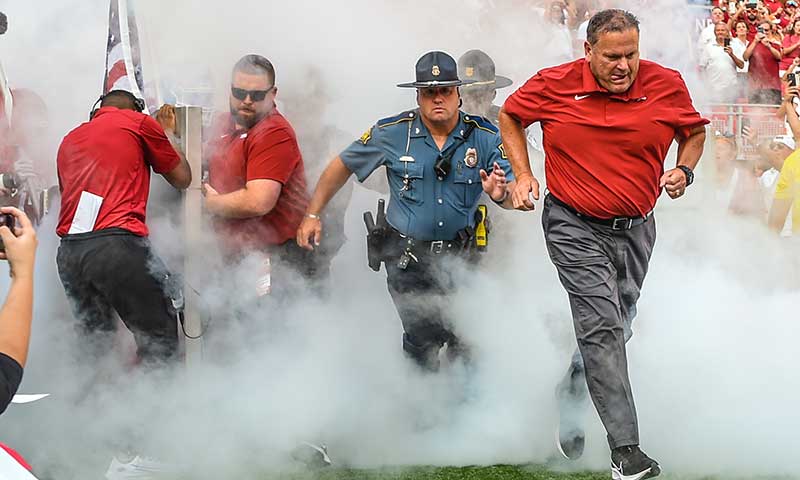 So, the 6-1, 240 redshirt sophomore convinced Arkansas coach Sam Pittman (in Craven Whitlow photo above) to end his August preseason move to tight end after Day One and return to where Johnson wanted to run for the Razorbacks.

No. 16 Arkansas plays No. 7 Texas A&M at 2:30 p.m. Saturday in the home of the Cowboys. CBS plans to televise the game nationally.

JOHNSON KNOWS BEST
Given Johnson’s contributions to the Razorbacks’ 3-0 start, Pittman gladly admits Johnson knew where he needed to play. On 15 carries, one a 48-yard run, Johnson has netted 132 yards and three touchdowns.

“We moved him to tight end, and he got his chance to go back the next day,” Pittman said. “He said, ‘Hey, I’m going to show you that you don’t want to move me. That I’m too valuable here.’ And he has done that.”

The big 'back, recruited as a short-yardage power runner, proved he can also run by and elude defenders.

“I never thought, ‘Hey, when we put him in the game I’m going to be overly excited that he’s in there,” Pittman said. “But I’m excited. I mean, this guy is a good running back. Tough, good blocker. It just goes to show sometimes you’ve got to wait your turn.”

TAKING HIS TURN
He waited his turn last year lettering on special teams. So he wasn’t about to be turned away without a turn at running back this year.

CLARY CLEARLY ENDORSES
No doubt Johnson is an actual running back, says senior lineman Ty Clary who has blocked for Johnson as a center, guard and tackle. And while Johnson has proven a more versatile runner than advertised, he’s never forgotten his power 'back roots.

“Dom, it’s kind of like he’s looking for contact out there,” Clary said. “He wants to run you over.”

“We have different packages for each 'back,” Johnson said. “It can be a period of time where you’re sitting on the sideline, and somebody else may be in the game, but you’ve got to stay ready at all times because you never know when you’re going to go in the game.”

“It’s pretty exciting to go back home and play at the Dallas Cowboys stadium,” Johnson said. “I live maybe 20 minutes from there. It’s going to be exciting to have my family there and hopefully come out with a win.”

“Great memories,” Carter said. “I can’t wait to go back. I’m hoping to see it fully packed out. It gets pretty packed during the high school playoffs, but I’m wanting to see what this game really is about on Saturday.”

“It was a little stressful,” Clary said, “but it was fun playing a little tackle, then going from guard back to center. It's all about just trying to help the team.”

“They are definitely a solid defense,” Clary said. “They do a lot of really good things, and I’m excited to see how we match up.”