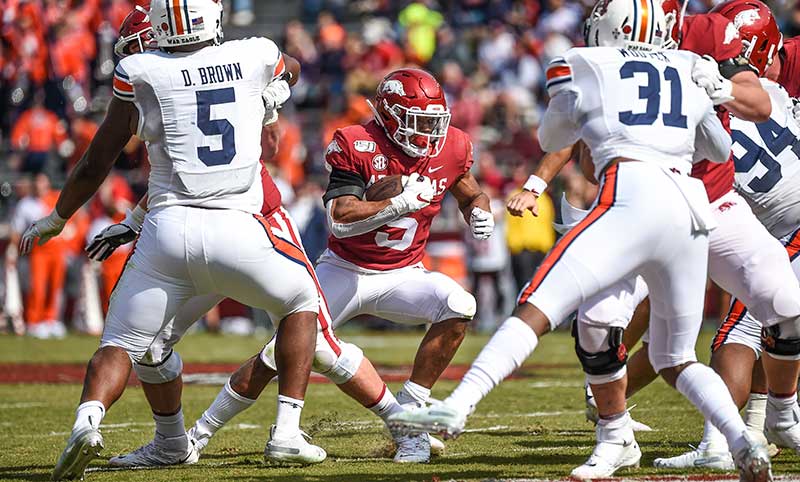 The offensive backfield starts via University of Florida  graduate transfer Felipe Franks at quarterback and returning senior 1,133-yard rusher Rakeem Boyd at running back with redshirt freshman QB KJ Jefferson and Trelon Smith, the transfer running back from Arizona State, the top reserves.

VET LINEBACKERS
After much competition at middle and weakside linebackers, senior Grant Morgan of Greenwood and junior incumbent Bumper Pool held the first-team status they had going into preseason camp.

Up front, junior college transfer Julius Coates and senior Dorian Gerald start at defensive ends with senior Jonathan Marshall at one tackle and either Kelly or Nichols starting at the other.

The secondary sports two true freshmen as backups in safety Myles Slusher and cornerback Khari Johnson, and veterans Jarques McClellion at corner and Myles Mason at safety and LaDarrius Bishop at nickel.

Levi Draper, a graduate transfer via the University of Oklahoma, and sophomore letterman Andrew Parker,  respectively, back up Pool and Morgan as linebackers.

PRECOCIOUS FRESHMEN
Pittman was asked about his true freshmen on the 2-deep, tight end Toll and defensive backs Slusher and Johnson.

Toll of Hazen was recruited as a defensive end. During the summer, he was moved to tight end, then briefly back to defensive end and finally permanently to tight end as Pittman and tight ends coach Jon Cooper searched for depth.

“I think we’ve got the game plan where he’ll know what to do,” Pittman said. “He does have a lot of speed. He’s probably a little bit faster than Hudson would be. Hudson’s really had a good couple of weeks, so I’m feeling better and better about that tight end room.”

Regarding defensive backs Slusher and Johnson, Pittman said, “Very talented and mature. In order to get on the field early as freshman you have to be mature. You have to be smart. You have to understand the schematics of the game."

ADVANTAGE ARKANSAS
As 24-point favorites, Smart's Bulldogs wield an advantage about everywhere, except at running back where Boyd is second-team preseason All-SEC, and at QB.

Pittman has believed from the January day Franks arrived  that he would be Arkansas' starting quarterback.

“With JT. Daniels, you can go back and watch the (USC vs.) Fresno State game from last season,” Pittman  said.  “I mean he’s just throwing darts and at any angle. He’s a shortstop. He’s a right-fielder. He can do anything he wants with the football. And of course, I was there at Georgia with D’Wan, and we know what kind of arm he has. He would be maybe a little bit more of a double threat  because he certainly can run. He can actually fly.”

The Razorbacks practice in full pads again Tuesday before  tapering Wednesday to “shells” and shorts.