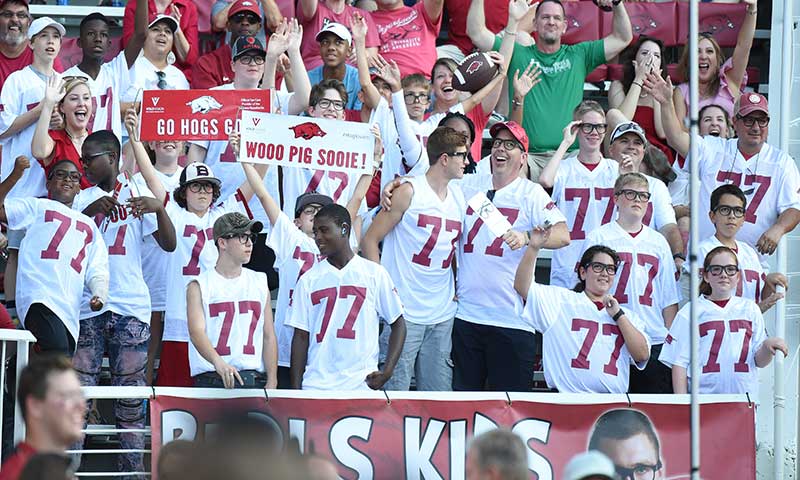 FAYETTEVILLE - Cornerback and kickoff returner have supplanted  the offensive line as the most missing-personnel challenged for Arkansas.

Going into their SEC opener Saturday as 30-point underdogs at No. 9 Auburn, the 1-2 Razorbacks are without starting cornerback Chevin Calloway and backup Britto Tutt, who started for Calloway in last Saturday's 44-17 loss to North Texas.

Calloway missed the North Texas game because of "a family issue he's dealing with," and will miss Saturday's game, too, Arkansas coach Chad Morris said.

Tutt was injured during last week's game, and "he will be out for a few weeks," Morris said. Tutt was the No. 3 kickoff returner behind Gary Cross and D'Vion Warren, who returned a kickoff 100 yards for a touchdown in last year's 52-20 Auburn victory.

Warren and Cross are injured and "doubtful" for Saturday. Deon Stewart, last year's kick returner, was in a green limited practice jersey Wednesday.

Redshirt freshmen Montaric "Buster" Brown and Jarques McClellion appear the next men up on the corner opposite junior mainstay Ryan Pulley.

"We have discussed everything in staff meetings," Morris said of position moves. "Right now he's playing well at his position. You hate to do that (move Curl) at this point right now."

FINALLY HEALTHY
The secondary and linebacker did get some good news. Sixth year nickel back Kevin Richardson of Jacksonville, Arkansas' most versatile DB who has played every position during a career, and senior linebacker Dre Greenlaw should play against Auburn.

Greenlaw has been out since spraining an ankle during his 10-tackles first quarter in the 55-20 season-opening victory over Eastern Illinois. The weakside 'backer has been limited in practice this week, but as a four-year starter certainly can step in if close to full speed.

"We expect both of those guys to travel and play," Morris said.

JACKSON REFRESHES
Fourth-year junior left tackle Colton Jackson, going through his first full practice in pads since July back surgery and playing 26 snaps last Saturday off the bench, was in full gear Wednesday but watching the first 20 minutes that media can view.

Jackson likely will alternately practice and refresh leading into his first start since last season.

Under new NCAA rules, a player can play a maximum four games and retain his present eligibility into the next season.

"We're trying to find the best-five combination on the field," Morris said. "We're cross-training for depth purposes as well."

STOREY RESPONDS
Morris was asked how fourth-junior quarterback Ty Storey responded in practice this week to being named the starter.

"He had been coaching in high school for 20 years, so it was just tough for him to take that next step," Graham said. "Especially when you’re a high school head coach who’s very successful. I bet he’s glad I went back three times."