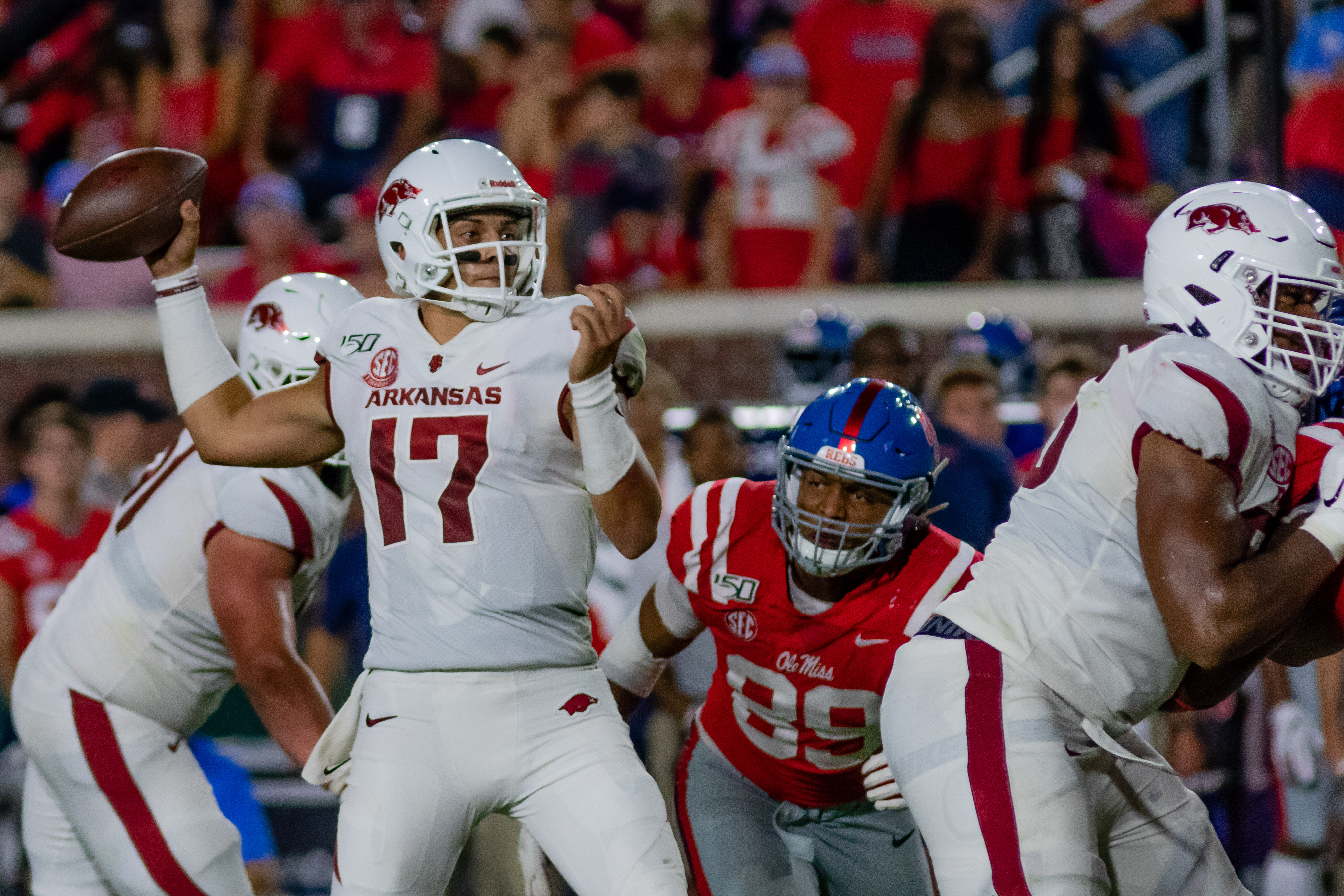 Graduate transfer Hicks (via SMU) was Morris’ quarterback in 2016 and 2017 before Morris became Arkansas’ coach last year. Hicks started the season-opening 20-13 victory over Portland State and played all but two series Saturday that Starkel, a junior in eligibility though a graduate transfer via Texas A&M, played before halftime.

However, with the Razorbacks trailing Ole Miss Rebels 10-3 at half Saturday in the SEC opener, Morris started Starkel the second half.

The Razorbacks lost 31-17, but Starkel completed 17 of 24 without a turnover for 201 yards and a touchdown. Starkel would have had two TDs, but his 38-yard strike to freshman receiver Trey Knox was voided because freshman receiver Treylon Burks inadvertently lined up on the line of scrimmage instead of behind it causing tight end Grayson Gunter to become an ineligible receiver downfield.

Morris reiterated Monday his postgame reasoning in Oxford for the halftime switch and asserted why Starkel starts this Saturday.|

“You know we felt like coming out of half … it wasn’t so much what Ben did or didn’t do, it’s what Nick did,” Morris said. “We were looking for a spark, something to get our offense moving, create some momentum, create some yards, give us an opportunity for some big plays. That was our decision going into it and Nick will be our starter.”

QUICK RELEASE
Morris was asked about the effect Starkel, less experienced than Hicks in Morris’ offense but at 6-3 two inches taller and with a stronger arm, wielded on the offense overall.

“I thought the ball came out of his hand quickly which helped the pass protection,” Morris said. “We did let him get hit after the ball was released too much. There was the one sack that he did not have a chance to get the ball out and throw it away.”

“I thought you kind of saw Ole Miss back off a little bit and give us some underneath stuff and loosen some things up,” Morris said.

“Nick’s arm strength, that may put a little more fear in those DBs that they can’t just stop the run,” Craddock said. “So that’s something I think Nick can give us, giving us maybe a little more running room inside.”

HICKS’ ROLE
Throwing too high for wide open running back Devwah Whaley before half became Hicks’ last chance to influence the game in Oxford.

“Obviously not hitting Devwah down the middle right before half would have tied the game up,” offensive coordinator/quarterbacks coach Joe Craddock said Monday. “That was huge.”

Still, Hicks committed zero turnovers, and has been the victim of several passes dropped balls in both starts. As the backup he must be one play away ready from taking command.

“Ben will be ready,” Craddock said. “He'll be ready if that time comes, but right now we want to see what Nick can do. Guys made plays for him and gave us a little bit of a spark. So I think it’s his turn and we’ll see what he does this week.”

INJURY REPORT
Senior defensive end Jamario Bell (injured knee vs. Portland State) will miss his second consecutive game, Morris said. So senior starter Gabe Richardson at one end will have all true freshmen backing or starting with him on the defensive ends including Mataio Soli, a starter, Zach Williams and Collin Clay.

RAMS TOUGH
Colorado State, 1-1 of the Mountain West Conference, losing a 52-31 shootout with Colorado in Denver then last Saturday waxing Western Illinois 38-13, outscored Arkansas 24-0 from 2:46 in the third quarter through a 17-0 fourth quarter to overcome the Razorbacks, 34-27 last year in Fort Collins, Colo.

“We’ve got a very much improved Colorado State team from a year ago coming in this Saturday,” Morris said. “We know we’re going to get their best shot. With five offensive and six defensive starters returning, they’ve got a lot of experience coming back.”