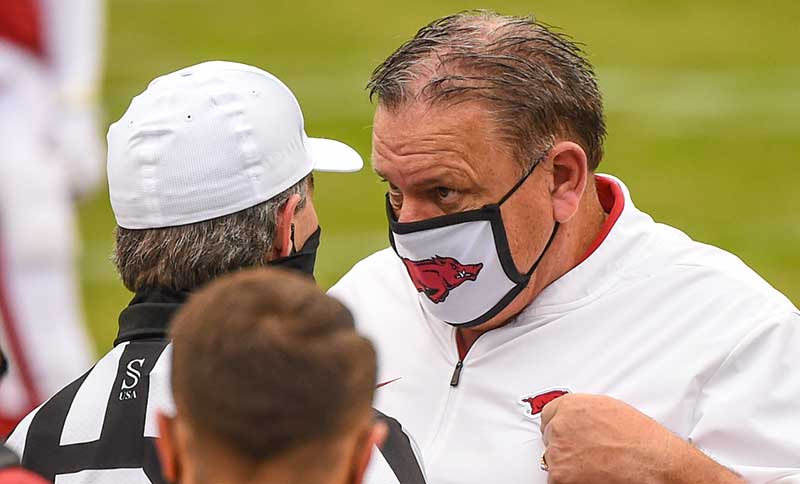 Pittman’s 1-0 Razorbacks play host to No. 21 Texas (1-0) at 6 p.m. Saturday on ESPN at a soldout Reynolds Razorback Stadium.

Arkansas and Texas, to become conference rivals again when the Longhorns and Oklahoma Sooners join the SEC, last rekindled their old rivalry at the 2014 Texas Bowl in Houston.

Not exactly the College Hall of Fame glory years of Frank Broyles and Darrell Royal. Among their epic clashes, Broyles’ undefeated Razorbacks, and Texas’ Darrell Royal’s undefeated Longhorns  played for what became Arkansas’ national championship and Southwest Conference championship in 1964 and their December  battle of unbeatens in the 1969 Shootout, crowning Texas the SWC champion and eventual national champion.

But even more than Arkansas celebrating the Hogs trouncing Texas 31-7 in 2014, Pittman recalls the Arkansas fans.

“I remember getting off the bus before the game and going, ‘Wow!,” Pittman said Monday. “It felt like you were at the Cotton Bowl. It felt like you were at the Sugar Bowl. As a matter of fact, a few years later (coaching Georgia’s offensive line), we went to the Sugar Bowl and I didn't feel like the atmosphere was as good that day as it was when we played Texas in the Texas Bowl. The crowd was electric the entire night.”

“A lot of history between the two teams, and our kids will be educated on the history,” Pittman said. “They need to be. I know the fans are excited.”

An appendectomy prevented Ridgeway from debuting in Saturday’s 38-17 season-opening victory over Rice.

Even without Ridgeway, so impactful in preseason drills, the Hogs’ deep defensive line wore down Rice during Arkansas’ 31-0 finish from down 17-7, Pittman said.

Against Rice, Morgan played less a quarter. He was automatically ejected because of helmet-to-helmet targeting penalty.

Hayden Henry, the third first-teamer in the senior troika for two position linebacking corps, sat out Saturday’s first half because of a second-half targeting penalty in last season’s finale against Alabama.

So, junior Andrew Parker joined senior Bumper Pool in the first half linebacking tandem vs. Rice. Parker made four tackles.

“Certainly, he (Parker) is a two right now, but we needed him as a one,” Pittman said Monday. “He came in and did a fine job.”

Henry, playing all of Saturday’s second half, starts with the reinstated Morgan. Pool must sit Saturday’s first half then can play vs. Texas because he was penalized for a second-half target vs. Rice

RUSTY BURKS
The Hogs had Burks for the entire Rice game, but not the entire Burks.

Logging just part of Wednesday’s practice and all of Thursday’s light practice since his Aug. 14 leg injury, Treylon Burks did not look like the receiver who caught 51 passes last year for 821 yards and seven TDs. Against Rice, Burks caught five balls for 42 yards with a couple of drops.

“Probably anything in life, if you don't do it on a regular basis, it's hard to perform at your peak,” Pittman said. “That's what happened with Burks. We were hoping with a little of Wednesday and all of Thursday, that he would come out and play really well. He didn't, and he'll say that. It's not his fault. He's practicing all (this) week. He came out of the game very healthy."

Pittman implied  Morris transformed from a happy to have earned a scholarship ex-walkon into a counted upon starter.

“When T. Mo made the decision to come back, I think he made the decision that ‘I’m going to do everything I can,” Pittman said.  “He’s put on weight. He’s put on strength, and he earned that spot. I was glad to see he made that catch and glad to see he got a touchdown. And he’s been a very willing and good blocker. I’m just really proud of the guy. He’s made himself into a good ball player.”