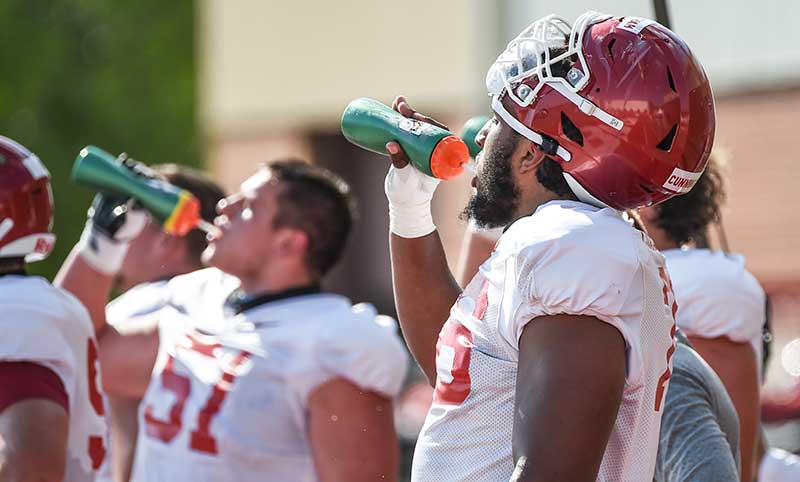 “The only thing they (defense) did not win was goal line situation and a four-minute situation,” Pittman said. “Other than that, they dominated the scrimmage."

Pittman said the defense wore out in last week’s scrimmage in 90-degree heat, but it played with energy throughout Friday’s second scrimmage that started at Reynolds Razorback Stadium but eventually moved inside the Walker Pavilion because of lightning.

“I thought our defense played much better this week, much harder,” Pittman said. “It seemed like they were in better shape than a week ago and made a lot of plays, whether it be tackles for loss, causing fourth downs on third and 3. A lot of turnovers for the offense, which means the defense forced them.”

“It was just out in open space and making guys miss, a couple of them,” Pittman said of the big offensive plays. “Then we had one that was well blocked inside. I think one of those runs ended with a fumble, however. Then (sophomore receiver) Trey Knox caught a long pass in the four-minute drill and did a nice job of getting down, understanding the situation. But other than that, there weren’t a whole lot of offensive highlights.”

“We didn’t play to our full potential today, but defense had a heck of a day today,” Knox said. “They executed and just got after our tails today.”

Pittman had bragged on Franks, the graduate transfer from Florida, and redshirt freshman Jefferson after the first scrimmage.

“We didn't look good today,” Pittman said. “We didn't make good decisions. We have to play with more confidence. We have to protect them better. But from a week ago to this week, it was not acceptable play by that position, and they know it. Certainly we'll get better."

“Well, when we go (defensively) it's usually because the D-line becomes disruptive,” Pittman said. “But I did see those guys (linebackers) making some plays. I saw Parker make some plays. Draper seemed to play well today, and I saw (true freshman linebacker) JT (Towers) make a few plays. Edwards is a guy who can run. I think last week they know they didn't play well, and I think they made some plays today."

Offensively, it seems left guard and tight end remain the most unsettled positions.

“Caratan had a really, really good day,” Pittman said. “He punted well. Then we also had a couple of kickers (Reed and Phillips) make 52-yard field goals today into a breeze, and they were both four out of five, both guys. So I was really pleased with the kicking overall today. Obviously you boom one a long ways or make a long field goal, it just does wonders for your confidence, and that’s what we needed with all those kids.”

That’s also what the defense needed and got Friday, and the offense will seek when practice resumes Monday.

“Certainly we weren't the same offense we were a week ago,” Pittman said comparing scrimmages. “Nor was the defense the same as a week ago.”