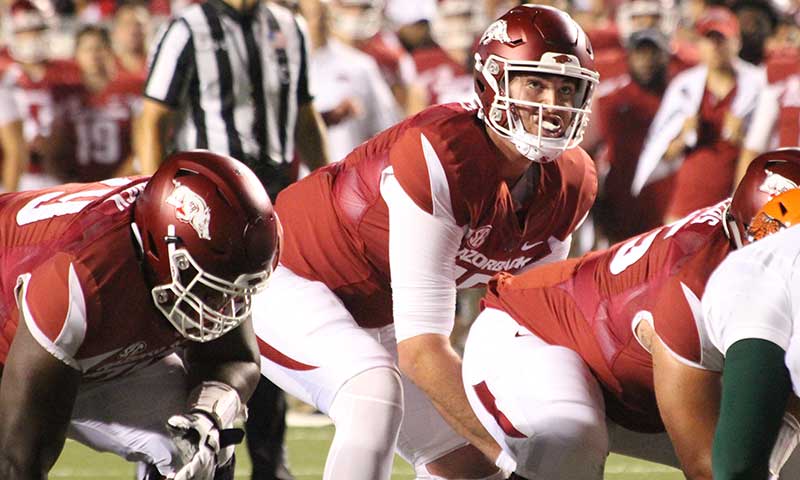 Greenlaw sprained an ankle while making 10 tackles during the first quarter of Arkansas' 55-20 season-opening victory over Eastern Illinois. Ramsey missed much of the August preseason with hamstring issues that withheld him from playing last Saturday.

Morris continues to call seniors Greenlaw and Ramsey "day to day." Meanwhile junior Gabe Richardson, starting for Ramsey at end last week, and true freshman Bumper Pool (six tackles, a pass breakup and a 60-yard return of a fumble) are groomed to start.

Redshirt freshman Dalton Wagner, apparently recovered from an August appendectomy, and true freshman Noah Gatlin practiced ahead of Clenin on Wednesday. Clenin injured an ankle during Saturday's game but dressed out for Wednesday's practice.

"Right now Ty Clary will get substantial reps at left guard and so is Austin Capps," Morris said before Wednesday's workout. "Noah Gatlin is gonna get a lot of reps at left tackle."

Clary had to work some center Wednesday because senior starter Hjalte Froholdt came during practice from class. Reserve sophomore center-guard Dylan Hays is practicing again after missing the first game with an ailing back.

CHEERS FOR COLTON
Two-year starting left tackle Colton Jackson of Conway practiced in a limited practice green jersey Tuesday and Wednesday for the first time since undergoing back surgery in July.

"It was quite the cheering going on from the offensive line when you saw him down in a stance and hitting a sled," Morris said of Jackson's Tuesday limited return.  "We anticipate getting him back pretty soon. Hopefully next week. Obviously he's just a great leader for this team."

K. RICH ON RUN
Sixth-year senior nickel back and Jacksonville High grad Kevin Richardson, granted a sixth season by the NCAA because of previous injuries, is out of a walking boot from breaking his foot in August moving furniture.

"He got that removed and did a little bit of running," Morris said. "Again, kinda like Colton, we hope we can progress him onto the field in the next couple of weeks."

Junior Ty Storey of Charleston moved ahead at quarterback Saturday while directing a 28-point second quarter that included three touchdown passes, but the junior from Charleston opened practice Wednesday quarterbacking the second unit.

So has 6-2, 292 D-lineman Guidry boasted of his offensive prowess?

"I never heard the end of it," said Watts, a senior alternating at tackle with Agim. "He needs to be thanking me. He's the luckiest guy I know."

Morris, his assistants and the training staff have stressed since Sunday that the Razorbacks constantly hydrate because of the nearly mile high thin air's effects.

Bumper Pool is among those avidly hydrating. However, Pool believes after cramping in the sauna-like conditions last week in Fayetteville that the projected temperatures in the 60s for Fort Collins Saturday night seem a comparative breeze.