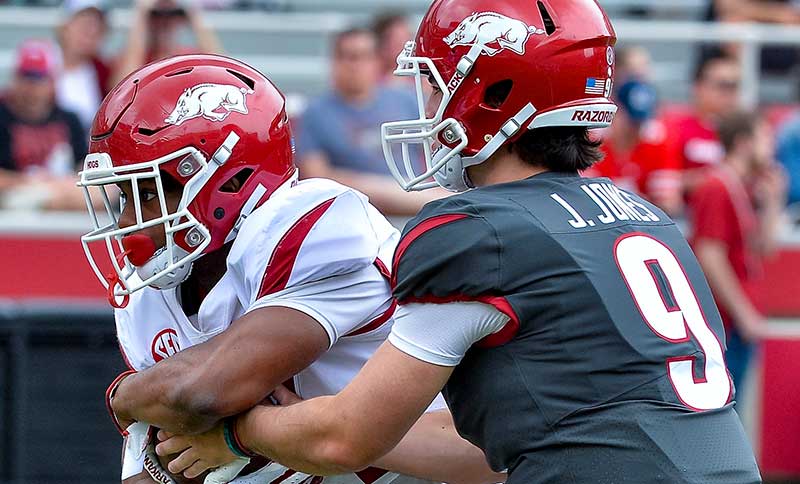 FAYETTEVILLE - After Saturday’s 110-play situational scrimmage, Arkansas coach Chad Morris insists his mind stays open through Wednesday’s scrimmage and perhaps beyond before announcing the starting quarterback for the Aug. 31 opener against Portland State.

“I don’t know when we’re going to name a starter,” Morris said post-scrimmage. “I want to go through definitely Wednesday and see where we’re at. We’ve got some work to do later in the week on Friday afternoon before we have our mock game on Saturday.  We’re getting closer, but we’re evaluating it."

Nick Starkel, who arrived in June from Texas A&M, may have delivered more big plays Saturday than Ben Hicks, the January arrived graduated transfer from SMU.

And like the previous Saturday’s closed scrimmage, third-team redshirt freshman John Stephen Jones might have moved the offense better than either.

“I thought that John Stephens Jones continues to impress,” Morris said. “He actually had a situation with the ones in a two-minute offense and led them down and had to score a touchdown to win the game, and he did it. I was very impressed with him.

"I thought Nick Starkel probably had one of his better days. I thought Ben made some really nice checks and some good throws today.”

Hicks, on “a bad decision” during a third-and-long situational setup, Morris said, threw an interception netted by cornerback  Brown. Jones threw no interceptions and completed a TD to receiver Mike Woods.

“It's a tough battle,” Warren said. “They have their good days and their bad days. Today was pretty even and both (Hicks and Starkel) were making good plays. Even John Stephen was making good plays with his feet and his arm. It was an even battle today.”

Warren got a laugh when asked from whom he caught his TD.

“That was Mr. Starkel,” Warren said. “Mr. Stress Man. If you ever see him in his shoulder pads, it looks like he doesn't have a neck.”

Ty Clary, the center snapping to all the QBs, said Hicks "is more vocal. But he’s been in that system (three years under Morris at SMU including two as the starter) a lot longer. Other than that, it’s pretty much the same.  Starkel has that confidence you like to see in a quarterback.  I know either way we are going to have somebody good behind us.”

If all still looks equal going into game week, could Clary foresee Morris going with a two quarterbacks game plan?

“I’m not the OC (offensive coordinator) or the head coach. I don’t get to make this decision,” Clary said. “But you kind of want, for the receivers’ sake, to know how the ball is going to come to them every time. And to let the quarterback himself build confidence.  It’s kind of harder to build confidence if you split time.”

“They all have one vote, and I’ve got one more vote than all of them,” Morris said.

Offensively for Saturday’s scrimmage, Morris bragged on the wide receivers, especially freshmen Trey Knox and Burks and sophomore Woods. “I also thought this was the best that (running backs) Rakeem Boyd and Devwah Whaley ran.”

“We started Ricky Stromberg to see what he could do running with the ones,” Morris said. “He made some mistakes, got beat … especially when you’re going against Sosa. But I’m very impressed. He’s very, very athletic.”

Defensively, as he has throughout the preseason, Morris started his praise with the “disruptive” play of Agim and Smith up front and senior middle linebacker De’Jon “Scoota” Harris, the 2018 SEC leading tackler.

In the secondary, Morris praised Brown and has been elated with sophomore safety Foucha both on and off the field. Morris said Foucha was awarded the PAT (Passion Attitude Trust) award.

“It’s an award we have been giving every month since we got here,” said Morris, who starts his second Arkansas season. “It’s voted on by people outside of our football building, academics and the nutrition center, honoring a young man who delivers the passion for being a Razorback.”

Morris remains optimistic that senior tight end Cheyenne O’Grady and Capps will be recovered from their relatively minor arthroscopic knee surgeries to play against Portland State.