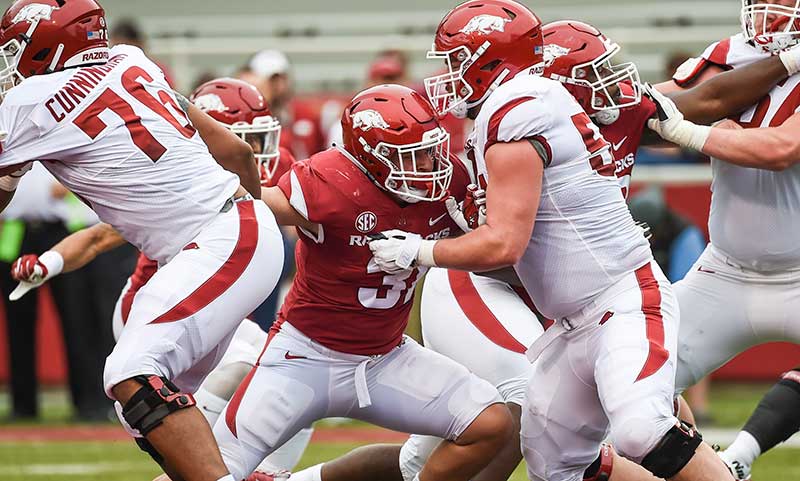 The Razorbacks didn’t practice in the spring because of the reaction to the coronavirus pandemic that closed college sports in mid March. Monday starts two days of non-contact drills without pads, followed by two days in shoulder pads and then full pads the fifth practice.

“We’re going to put them through tough practices, and I want to see how we react,” Pittman said. “I feel like I know how we’re going to react. That we’re going to dig down and come roaring back the next play. But we have to test our football team in practice to see what we have.”

The thirst to practice for the first time (other than late summer walkthroughs) fuels Pittman even after the SEC dealt his Hogs the toughest possible hand. They face six teams ranked in the Hooten’s Arkansas Football preseason Top 20. Four rank in the Top 10.

Already on Arkansas’ SEC West schedule are Hooten’s No. 3 Alabama, No. 7 and defending national champion LSU, No. 12 Auburn and No. 16 Texas A&M plus Ole Miss and Mississippi State with Missouri and No. 24 Tennessee scheduled from the SEC East.

The SEC, cancelling each school’s four non-conference games,  added No. 4 Georgia and No. 9 Florida from the East to  Arkansas’ schedule.

“The reaction to Georgia-Florida is it allows us to potentially be the hottest team in the country to talk about,” Pittman said. “So they gave us more opportunities out there against really highly ranked teams. That’s how we look at it.”

Feleipe Franks, Arkansas’ first-team QB, is a graduate transfer from Florida. He quarterbacked the 2018 Gators to a 10-3 season and Peach Bowl victory over Michigan before his  active Florida tenure ended with a broken ankle three games into 2019.

“Hopefully Feleipe will be what we think he is,” Briles said. “There’s still going to be competition, but I would say it’s going to be his job to lose.”

“Ball protection is going to be No. 1,” Briles said. “Right now there’s no contact with the walkthroughs. Really no high-speed collisions. Right now you can run freely and know nothing’s going to happen to you. That changes.”

“We're going to give up a touchdown sometime next week, would be my guess,” Odom said. “How are we going to react to that? What's our mental focus to be able to put that play behind us and play the next snap? What's that look like? We have done a lot of talking, and they've put in a lot of work, but let's go put it into action and see how we respond.”