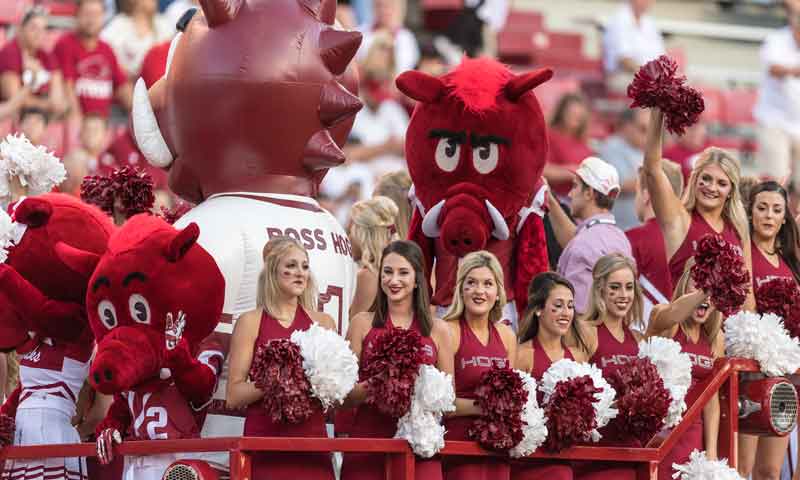 FAYETTEVILLE - From his dad to his Arkansas teammates, they kid Koilan Jackson about his tendency to fall asleep.

“They told me to go deep, so I ran deep,” Jackson said Tuesday. “It was a perfectly thrown ball. I got past his (Pulley’s) leverage. He had my left arm, and I just caught it with one hand and pulled it in like I’m supposed to.”

“If we can keep Koilan awake, he’ll be alright,” Keith Sr. is reported to have said.

“I wasn’t really expecting it to break like that,” Hayden said. “I kind of got a little tired at the end. But it was a good run just to get the touchdown at the end and everything like that.”

Initially it appeared Hayden stepped out of bounds at the 9-yard line before it was declared a TD.

Could you tell if you stepped out or not?

“We actually had our assistant running backs coach down there, and he said I stayed in,” Hayden said. “I got hit initially, so I stayed on my feet and saw another guy kind of cut outside and then just tried to run to the end zone.”

Like Koilan Jackson, Chase Hayden is the son of a former college and NFL player. Aaron Hayden played running back at the University of Tennessee and for four NFL seasons with the San Diego Chargers.

“My dad can tell me about the little things,” Hayden said. “He’s been through the college process. He played in the SEC and then the NFL. Just the little things like preparing, working hard, doing extra stuff, studying the playbook. Those are the things he’s taught me. I talked to him after the scrimmage and he just said keep it up and that I’ve still got a lot more to prove.”

“Chase Hayden is doing a great job like you saw in the scrimmage Saturday,” Colton Jackson said. “And Maleek Williams (also a true freshman), Devwah and Dave, they are all getting along figuring out the offense, finding holes and getting through them and running through tackles. It’s pretty good.”

“Jonathan took the top off a couple of times,” Jones said. “He scored twice.”

Jones was catching the long TD bombs during the early practices since the Hogs started preseason drills on July 27 but said he hasn’t had a TD catch since Friday.